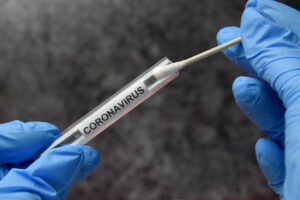 “Do you have a deviated septum?” she asked.

The lab tech in the testing station was getting ready to give me a COVID-19 test, and she was checking things off on her list.

“What do you mean?” she asked.

And she leaned over, gently pushed my head back, and looked straight up my nose.

She didn’t explain what she saw up there, and that sent a bit of a shiver of discomfort through me.

You see, when I was 16, I got my nose broken for the first time, and it’s been broken at least another six times since.

Back then, I was a coach for a Little League farm team, trying to multitask, simultaneously teaching my pitcher to throw, my catcher to set up properly behind the plate and the batter to swing at the ball. I stood behind the catcher.

“Throw the ball,” I instructed the pitcher when everyone was set.

“Aren’t you going to put a catcher’s mask on?” he asked from the mound. Smart kid.

The pitcher threw the ball and the batter swung and ticked off a foul ball, which hit me smack in the kisser.

I picked up the ball and threw it back to the pitcher. But something wasn’t right.

The batter was crying.

“What’s wrong with my nose?” I put my hand up where I left my nose that morning and it was no longer there. I felt around, and found my nose plastered up against my right cheek. I put it back where it belonged and asked, “Where’s that catcher’s mask?”

As I turned to look for the mask, my eyes were launching projectile tears. My nose really hurt.

That was the first break. Several others ensued but my favorite break occurred in the back seat of a 1958 Renault Dauphine with a maiden named Carol. But that’s another story …

Anyway, back at the testing lab, the tech was pulling out her swab and she kept looking up my nose.

Oh, I’ve seen the videos of people sitting in their cars with the nurse poking a little piece of wood the size of a yardstick up somebody’s nose. And I remembered President Trump holding up a swab that looked like a long Q-tip with a huge glob of cotton at the end bigger than a golf ball.

I didn’t know if a thing like that would make it all the way up my nose and Lord knows what she’d pull out with it when she was done.

I’ve never looked up my nose. I have no idea what’s up in there, and that got me to thinking about this swab that was about to go searching for coronavirus beasties.

Was it possible that I still had raisins from kindergarten stuck in my nose, or wads of white glue from first grade, or maybe a June bug from a motorcycle ride? All that was running through my mind when the technician poked me to get my attention.

I gripped the side of the chair and nodded.

She had reconnoitered the best path for the swab through my crooked nose and put the swab in all the way and pulled it out. It took less than three seconds.

After all the horror stories I’d heard about the procedure, this was nothing. In baseball parlance, it was a can of corn. I took my first look at the swab she used and it was the width of a pencil point. This was simple. I didn’t ask her what she saw up my nose — I didn’t want to know. I was already getting out of the chair.

She packed everything in the lab bag and told me I’d have the results in a day or two.

When I walked out of the lab, there were people standing in a proper social-distance line in the hallway and out the door, waiting to share my experience.

They all had the same look on their faces I must have had on mine before I went in. I stopped in the middle of the hall and said to everyone, “It’s a piece of cake,” I told them, smiling. “Honest.”

By the looks on their faces, nobody believed me.

And two days later, I got the results of the test: negative.