DIYer: There are times when it is OK to become unglued 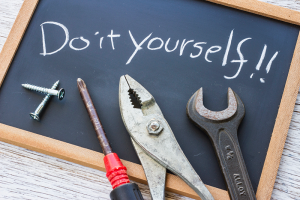 With spring coming up soon, some of us are thinking about attending to some fix-up items around the house.

I envy people who are organized do-it-yourselfers, who keep their tools in tip-top shape, with every item in a special place, ready to be grasped and applied in seconds.

Things are a little different in our house. I have tools in the attic, tools in the basement, tools in the garage, and tools in the kitchen. Looking for a hammer — I must have five of them — can take 20 minutes. I have a nasty habit of using a tool and leaving it right in that vicinity.

And if I decide to fix something, my wife always wants to know what I’m going to be working on and what kind of tool I’m going to use.

One afternoon, for instance, when our kids were little, I told my wife I’d be spending the afternoon gluing down some stair treads and a runner.

“Good, dear,” she said, patting me on the back. “Don’t hurt yourself.”

Some of you might ask yourselves, “Why would she tell him not to hurt himself? He’s just gluing stair treads, for crying out loud!”

My wife and I, even way back when our kids were small, had been married a long time. She was holding the ladder the day I got stuck on the roof. She applied the tourniquet the night I sliced my fingers in the saw. She drove me home from the hospital the afternoon I fell out of the garage rafters trying to put away snow tires.

She is also the person who said to our children early that spring, “Quiet now, kids — I want to be able to hear if your father falls off the ladder while he’s painting.”

I had started that particular Saturday by announcing to all that work would soon commence on the stairs and porch treads. I went to the hardware store with my daughter Elisabeth and the man behind the counter assured me, “This should do the trick,” handing me tubes of something known as “liquid nails.” He provided me with all the proper cautions and directions, and finally asked me if I had a caulking gun.

“Sure do,” I told him confidently.

Once outside, Elisabeth was observing things as per usual.

“Daddy?” she asked. “Why does the man in the hardware store always shake his head when you leave?”

“Because he’s been talking to your mother,” I said.

I got right to work when we returned home. I had taken the runner and stair treads off to paint the front porch. My friend Kevin, who was the neighborhood handyman, had originally put the treads down to stay forever, so getting them off in the first place was tricky. The treads didn’t come off easily, and some of the gooey stuff stayed on the porch surface. It was hard to remove, and I had scraped off as much as I could before painting over it.

I had to get that tape off to start the job.

“How sticky can it be?” I asked myself.

Right then and there I should have driven back to the hardware store for advice.

But no, I figured I could handle getting the tape off pretty quickly.

Not in my lifetime.

Tale of the tape

Yes, I got the first piece of tape off, then a second. The fabric was falling apart in my hands and the glue was getting all over me.

Up to this point, I had been doing something intelligent — I was removing the tape with one hand — my right hand. I decided to rest for a minute and get a drink, because removing the gooey tape from a 12-foot rubber runner was as much work as skinning an alligator.

Sitting down on the porch, I put down my right hand for balance.

And my hand stuck solid to the porch.

I pulled. I twisted. I tried doing it slowly. I tried jerking my hand up. I tried to slide my hand with the glue.

I was stuck — literally, virtually and incredibly.

My brain was working overtime. “If I call my wife for help,” I said to myself, “I am never going to hear the end of this. If I just think about this for a couple of minutes, I’ll come up with something.”

Overhead, satellites passed through the sky. In the distance, children were singing. I could hear my neighbor’s wife clanging pots and pans in her kitchen.

But there was no joy on my front porch. I was stuck to it. I had a brain flash, thinking that perhaps the glue would harden and the EMS guys would have to saw away some skin to let me loose.

I finally decided that the problem was that I’d created a vacuum somehow, between my hand and the porch, with the glue forming the seal. I needed to get some air under the palm of my hand, and then I could probably pull my hand up.

My paint scraper was a few feet away, and I gyrated until I could kick it over to my left side.

Just as I started to pry into the glue to get my hand free, our neighbor drove by and stopped, window down, asking me how the job was going.

I was waving to him with one hand, the other still steadfastly fastened to the porch floor. And I thought, “I must look like a gymnast at the end of a floor exercise, taking a rest and waving to the crowd.”

My friend drove off, and I could swear he was shaking his head.

After I managed to get the paint scraper under my hand, I was able to leverage it and get my hand off the porch with a sound of air getting sucked into the vacuum under my hand.

Seconds later, my wife wanted to know why I was scrubbing my hands so vigorously in her kitchen sink.

“I’ve got to get this glue off my hand before I get stuck to something,” I told her. She was very helpful. We tried hot and cold water. Dishwashing detergent. Rubbing alcohol. Cleanser. Dirt. Peanut butter. Taco sauce.

Finally, we found an old can of mineral spirits and ZAP! The glue came off.

“You’re lucky you didn’t get stuck to the porch,” she said, turning to walk into the dining room.

I could swear she was shaking her head.