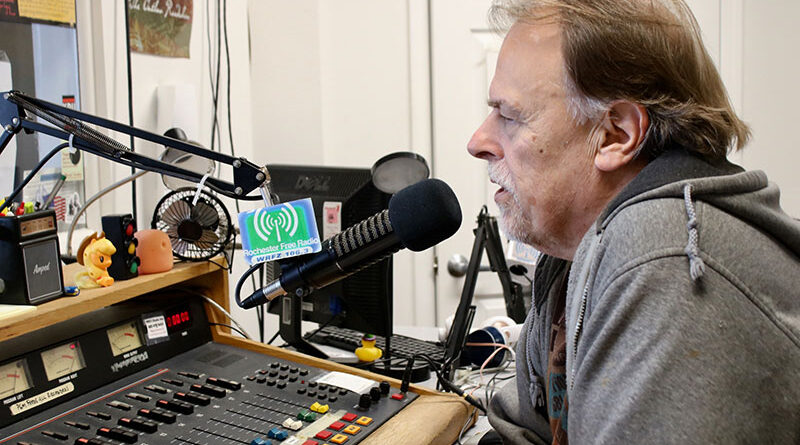 Think about how our lives were different when we went to high school.

It was important that we had a radio in the bedroom. Between talking on the phone and doing homework, that radio was so important. It was on all the time. When a great song came up, we’d share it with whomever we were talking to on the phone.

We’d talk about the music. We’d talk about the artists and we’d trust the deejay to bring us more of what we loved every night — the sounds, the jokes, the news and the culture. A really good deejay held sway over a huge chunk of teenage geography.

Music jocks in Boston, New York and Philadelphia had millions of listeners, and what you talked about today in school is what you heard last night on the radio.

But those days are gone.

Then again, maybe not.

For the last 11 years, deejay Chuck McCoy, 68, has lived out his childhood dream on Legends Radio (WLGZ 102.7 FM) in Rochester, giving his audience the feel of what radio was when we were all a lot younger — comedy, music, local goings-on and perspectives you can only hear from a human.

Every weekday from 7 to midnight (and Saturday from 4-7 p.m.), he packs listeners aboard the bus that’s loaded with the station’s oldies playlist with sounds familiar to everyone. Throughout the ride, he’ll introduce you to a cast of dodgy characters who will remind you of people you know and invite callers to join the crew to add their special spin of Rochesteriana.

McCoy’s knowledge of pop music is encyclopedic, as is his experience in the radio industry from the 1960s to today. He’s been there. He even describes his comedy routines — written each day before broadcast but sometimes exploding on the spot — to use John Lennon’s word: “sardonic.”

There’s a scripted structure underlying his shows. Expect a “10 o’clock block” of music with a theme (like Bruce Springsteen’s birthday or Cindy Lauper’s hair) and a “lost 45” feature at 11 p.m. that allows him to expand on his knowledge of rock ‘n roll ephemera.

For folks in this age group, his show and attitude are a perfect accompaniment to working on the car in the garage, folding clothes and doing the laundry, sitting on the porch with a lovely amber beverage or holding hands with your honey. You remember the tunes and the times that went with them. You laugh at the zany characters that flow out of his head (more about them in a moment). And you listen to the callers and the people who request music and wonder, “Would he play ‘Look for a Star’ for me? Should I call?”

But the structure is just enough to give the show a foundation. Chuck takes off from there.

Clint the Security Guard (patterned after a rough and raspy Clint Eastwood);

Chris the Barber (after Christopher Walken — “Walk-Ins are always welcome”);

Senor Casanova (a B-film actor from years ago);

The Ghost of Elvis (who lives in the air-conditioning system);

Jack the Bookie (based on Jack Nicholson);

McCoy conjures his characters in situations silly enough that you have to stop and listen to what’s happening. During the day he scripts and records a character’s dialogue, then replays it on his show so he can converse with that character, as if that person were in the studio or on the phone with him.

“I like the digital age we have now because it’s a lot easier — I don’t have to pull out records for my show,” he said. “On the other hand, digital has made it easier to automate and eliminate jobs. Fortunately I’m working at a station that doesn’t do that. But more and more stations have fewer and fewer air shifts. For every guy like a Brother Wease or someone who’s big, there are a lot of others that can’t make it. When deregulation of radio came in 1996, 10,000 people across the country lost their jobs and many of them were talented people.”

He said computer-driven digital formats “are cheaper, but not interesting. It seems to me that going live and local would be radio’s saving grace in the long run. Maybe personality radio would come back. It’s not dead yet. Hearing the same music over and over again with a guy saying, ‘The best music in Rochester’ with some jingles, I don’t know…I think our listeners at Legends like us because we’re down home.”

Born and raised in Buffalo, McCoy grew up listening to the great deejays of the time — Joey Reynolds (whose theme song was sung by Frankie Valli and the Four Seasons), Tommy Shannon, Sandy Beach and Jackson Armstrong. They commanded the airwaves away from big metro areas and had a huge following.

He got into radio in college (Brockport and Empire State), where the carrier current took the station’s signal as far as the dorms on campus.

“It was good experience, but you only get going when you get into a professional environment, in a commercial operation,” he said.

McCoy’s first gig was at WACK AM radio in Newark, after a few weeks, he was doing all-night jobs at WTKO in Ithaca.

“Then I got a weekend job at WKBW in Buffalo. That was the radio station I grew up with. Just about everybody in Buffalo and beyond listened to that station because it had 50,000 watts,” he said. “That gave me a lot of exposure and I got a lot of calls from up and down the Atlantic seaboard.”

But the environment was a turnover factory for young talent with a big difference between haves and have-nots. He left. The mouse traps on the control board were a final sign that working conditions were not good.

And, he finally walked away from radio.

“I swore I would never work in it again,” he said.

He spent the next seven years working for Rochester schools as a driver-education instructor. He met and married his wife, Cheryl. They started a lawn and garden business in 2005.

Then things started to turn around. McCoy founded Rochester Free Radio, a low-power FM station (30- 50 watts) that fits in between the full-power stations.

All of a sudden, he had his own radio station.

“I appointed some board members and we kept seeing that it was going to happen. President Obama voted the new regulations in, but there was still a waiting period. We were working really hard to get set up,” he said. “With nothing to do in radio, I called Mark Shuttleworth, the program director at Legends in 2009. He said he could use somebody to fill in.”

Just when McCoy was getting tired of driver education — “It was kind of like doing a nervous breakdown on an installment plan” — the night position opened when that deejay had a heart attack and McCoy took over the evening air chair in 2011.

Rochester Free Radio debuted in 2016 with programming from 6 a.m. to 1 p.m. with news and talk and after that, a lot of variety.

“If someone wants to come in and do a polka program, we’ll let them,” McCoy said. He does a show himself, interviewing local personalities.

Even so, Legends 102.7 has his full attention and a growing fan base. Besides the personalities he creates, McCoy welcomes regular callers who chime in to make requests and parley with the deejay.

“Bob from Bob’s garage is always talking about his Trans Am,” McCoy said. “Bobcat Billy is very up-tempo who is really into music. Rachel from Fairport talks about her family and kids. I have a comedian friend, Bob, who calls to tell me jokes that are a bit off the deep end. He’s a national treasure on some other planet. Lou calls with sports and scores and updates and Tracy, Christine and Clayton all have a strong knowledge of older songs.”

McCoy has also branched out. He did pre-COVID stand-up comedy and hopes to see more gigs. He’s learned some lessons along the way.

“Basically, you’re going to bomb the first time you do it and for some time after that. You have to learn to get the hang of it,” he explained. “Eventually I got the hang of it. Crowds were great. Open-mic comedy is kind of weird because most of the audience is comedians and their friends – they want to get laughs but don’t want to be supportive of anyone else. I was surprised what a good reaction I got.”

“Some people are not meant to be careerists,” he said. “If I could meet the old me, I would advise, ‘Do what you gotta do — drive a school bus, make money — make your avocation your great thing.’ I’m just not good at regular jobs. My mind is elsewhere. My mind tends to go in a lot of directions.

“I have a lot of interests. I try to narrow them down to just the stuff I’m good at. Maybe I should have gone to New York and spent time in the coffee houses doing comedy; maybe I could have been a writer on Saturday Night Live.”

And maybe that lawncare business should have started earlier, too.

The beauty of a Chuck McCoy is that at his age, he’s not done doing new stuff, reaching new people and challenging himself. And it doesn’t cost a dime to check on him on 102.7.

Photo: Chuck McCoy, 68, commands the evening air chair at Legends Radio 102.7 FM in Rochester, where he presents a special show with a varied cast of characters. He is also the board chairman of Rochester Free Radio, a low-power FM station that presents new, talk and special shows with a local basis.