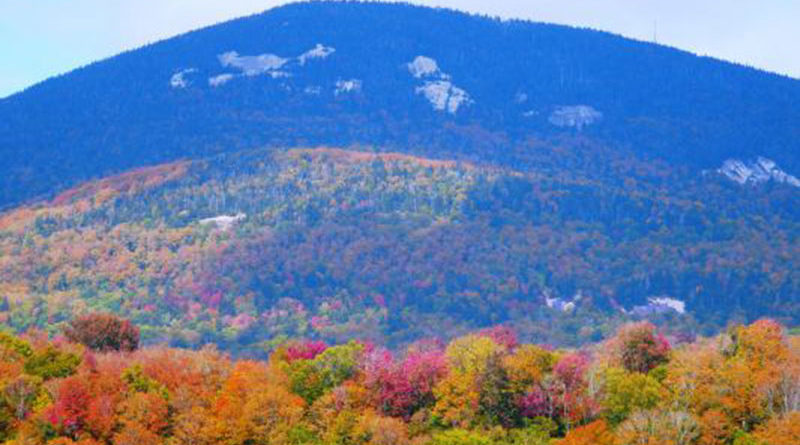 Forget the high taxes. Nothing can beat the kind of beauty we have in New York, especially during a fishing trip in the Adirondacks

Whining about New York state taxes is something that unifies almost all of us who live here. I complain like an elderly curmudgeon about it to my financial adviser. But he takes a slightly different, happier view of it.

If you’re an outdoorsman, he says, you can’t beat the kind of beauty we have in New York — and he’s right. The value of enjoying something like an Adirondack Mountain fishing trip with several 55-plus friends in the fall is indeed, priceless.

So, too, is climbing all of the Adirondack Mountains and becoming a member of the revered 46er group or any other similar outdoor-related activity that can constitute the best days of an outdoorsman’s life.

Full disclosure here is the caveat that to truly enjoy it you may have to go beyond your comfort zone, unless you’re used to dealing with the state’s sudden meteorological changes, especially in the Adirondacks.

There’s also no better way to do that than with some guys who do it on a regular basis and enjoy it. These guys have the right gear, the right tool and the know-how to do exactly what you have to do to keep going on a memorable trip like the ones they’ve taken to the Adirondacks in the fall of every year for the past 35 years.

They’re not alone. It’s not surprising that a lot of outdoorsmen and women are over 55. At this point in their lives, they wouldn’t miss the prime fishing or outdoor recreation opportunities our state has to offer, especially in the Adirondacks.

For two of my friends on this trip, that included dealing with health complications that impose fairly serious restrictions yet it would take a far greater health restriction than following kidney transplant survival protocol or bringing oxygen for COPD along for them to stay home.

Our initial destination was Lake Abanakee, a lake I’d never heard of but with hundreds of lakes in the Adirondacks, it’s easy to miss one.

Adversity in the form of bad weather struck right off the bat as we woke to grey rainy skies. As avid fisherman know, however, that means fish should remain actively feeding. Should that is, not definitely.

Even the most skilled fishermen know there is no guarantee you’re going to get one. Some guys are superstitious about it. Asking the fishing gods to smile on you might work.

Late season weekdays are a favorite for my friends since there are few if any other craft on the lake and most people are either at work or they’ve already locked the cottage up for the winter by the time October rolls around.

Among the fishing trip preparations is the transportation of favorite canoes the guys have used to traverse Adirondack lakes for decades.

Hours pass quickly in the company of good friends and splendid fall colors. There are memories, recommendations and observations to discuss. Silence is also golden while lines are cast.

Live bait can and often will hasten the fish catching process but my group members and I eschew it preferring to guess what type of lure or artificial bait can fool a fish into thinking it’s real.

Today, however, not much works. The lake is known for pike and Buffalo Bill, one of the most ardent fisherman and hunters I know, does indeed get a 22 inch pike. Judging by internet pictures however, there are far bigger pike in the depths below.

One of the guys reminds me pike teeth can do some serious damage and gives me special tooth proof   gloves the pike can’t bite through.

If only, I could get a pike to begin with. I’ve only caught one and it was a prehistoric Neanderthal looking gar pike out of Irondequoit Bay last summer. 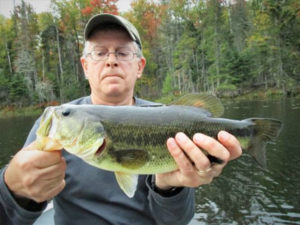 The next day brought sun and pleasant temperatures that required little weather gear. A near 70 degree sun made me think about a swim but a warm summer sun is fleeting in the Adirondacks and by late September early October, lake water is bone chilling.

The day passed pleasurably but without any really big fish being caught. My boat mate got a few. In fact, after two days and about 16 hours of fishing, I had caught none. The company of good friends, a sunny day and beautiful scenery only goes so far before not catching anything gets a little frustrating.

At dusk we rested our paddling arms and used a 3 horsepower motor my friend had been working on for what seemed like a decade. After Rick caught what looked like the biggest small mouth bass I had seen in years or forever, frustration started to seep in.

That’s when I got one of similar size, the bass of a lifetime making the whole trip so very worth it.  Then it got even better.

An afternoon of canoeing around Lake Durant with Blue Mountain rising up to the sky in the background yielded some of the biggest largemouth bass I ever got on the third day of the trip. A subsequent return to the same spot on Abanakee yielded a big largemouth, too.

You may be wondering how good these fish taste over a campfire but I wouldn’t know. Beating it over the head and eviscerating it isn’t for us. The only uncomfortable moment a big bass has to endure is having to pose for multiple pictures while we toast a memorable moment.

The nearly pro guides on this trip made it a learning experience that should lead to even more success in the future. It’s a pilgrimage I’ll be making for as long as I’m physically able since it’s the kind of thing that will leave one smiling and knowing they’ve lived life to the fullest when their time on Earth is done.