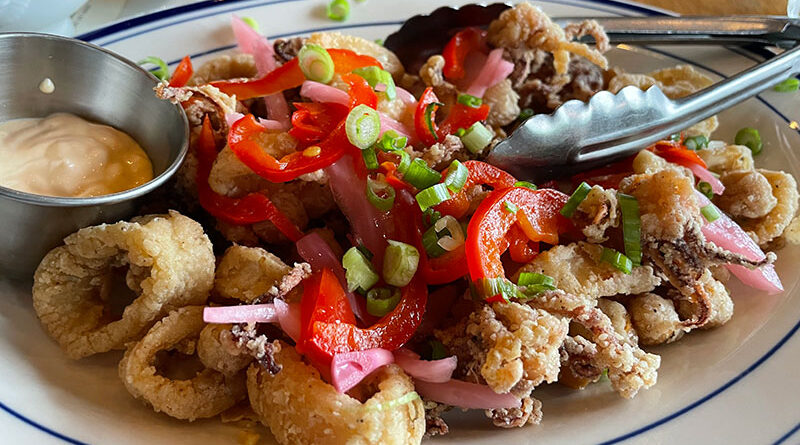 Kindred Fare boasts food and experience to bond with

The word “kindred” itself is something special. It’s a frequently used word but not so often enough that its meaning or affect get watered down.

It’s easy to see that the effort of Kindred Fare, located at 512 Hamilton St. in Geneva, has taken the confident and flowery word into consideration with food, aesthetics — and attitude.

The very open concept, plus outdoor space and seating, is minimally decorated. The décor, design, and use of space are very purposeful, even when considering the use of space.

Aside from the apropos Finger Lakes lake décor stuck to the wall and the planters, Kindred Fare’s blatant chef-d’œu·vre is the bar area itself.

The concise menu is available every day, plus the daily specials. It is filled with a variety of options, yielding difficult decision making. However, there are adventurous routes to try.

One option, when dining on Mondays, is to enjoy the three-course prix fixe menu. On Tuesdays, enjoy the four-course chef’s menu (reservations required).

A few beverages were enjoyed. When you can’t decide between a beer or a whiskey, why not have both? Kindred Fare offers beer and wine pairings. For $10, I was able to enjoy a 10 oz. pour of the [Wind Blown] amber ale from Canandaigua brewery Naked Dove and a small pour of Finger Lakes Distilling’s bourbon. I’ve had the amber ale before and I’m always willing to return to its medium-bodied, malty and toffee characteristics. The bourbon tasted a little young, slightly harsh. However, these complement each other well.

Later in the meal, the Charlie Chaplin classic cocktail ($11) made its way to our table. The tart cocktail is made with plum gin, apricot liqueur and lime. Although my wife made a face upon trying it, I greatly enjoyed the gin-forward cocktail.

For appetizers, we enjoyed the crispy calamari and chickpeas ($16) and the soup special — asparagus and leek ($8). The soup was nice and thick, similar to a hearty pea soup, and decorated with crispy leeks. The soup is far from bland, considering the strong and slightly bitter flavor of asparagus and the sweet leek for balance.

The lightly breaded calamari in both its full and ring forms were very good. The breading didn’t overpower or hide the squid’s flavor or coloring. The aioli was a good dipping sauce, too, but what made the dish was the supporting ingredients — the crispy chickpeas and the pickled peppers and onions. The outside of the chickpeas were crisped enough and didn’t ruin its soft, beany inside. And the pickled veggies fell in that perfect middle — the potency from the pickling process was pleasurably palatable.

We ended up enjoying two entrees off of the specials list, which makes three dishes not on the general menu, but it’s OK—get it before it’s gone. So, the roasted duck breast ($29) and house-made pasta ($26) found its way to the table.

The festivo pasta lived up to its name. The thick-primped pasta looks almost like streamers covered in a hearty, well-seasoned ragu. Plus there was dusted confetti, err, grated parmesan cheese. (Frankly, parm should be called the confetti of cheeses, because it makes food much more fun.) As hearty as the plate of food looked, it wasn’t heavy. We split both entrees but even eating half didn’t feel overly filling.

The meatiest part, of course, were the beef and pork meatballs that sat on top of the mount of pasta. These thick meaty balls could be enjoyed on their own or broken up and mixed in with the pasta. There was enough to include with every bite.

When ordering the duck, we were asked how we liked ours cooked. We opted for medium and got as we asked. Four thick, succulent slabs of duck breast came out with fingerling potatoes, oyster mushrooms, greens and Romesco sauce. The duck was practically melt-in-your-mouth and stole the spotlight from the supporting cast aside from the Romesco sauce. This medium-thick tomato-based sauce was a flavorful complement to the duck, considering it was pureed with cashews and almonds to give it a slightly nutty flavor.

We took a look at the dessert menu simply out of curiosity but we were immediately sold on everything (but ordered three items for $24, at $8 each). Although the lavender crème brûlée would have been the fourth item, we stuck with light fare: the affogato, the pear sorbet, and asparagus ice cream.

Yes, you read that correctly.

The scoop of Kindred Fare’s asparagus ice cream was refreshing. I finally can say asparagus is refreshing, albeit when in ice cream form. Its distinct flavor was definitely present yet still hard to describe. You truly have to taste it to believe it. The scoop came with a piece of crispy shortbread.

The pear sorbet was refreshing on a different level. The vibrant flavor of the sorbet was sweet as anticipated but not cringy-sweet. Accompanied by a sliver of dark chocolate, the out-of-this-world flavor seemed to be reeled back into its proper orbit. It’s one of those a-ha moments where two distinct desserts pair well and still doesn’t seem real.

The affogato speaks for itself with homemade vanilla ice cream and a shot of espresso. It’s a classic, infallible dessert I’d enjoy every night if I could.

Before gratuity, the bill came $125, although you can’t put a price on quality. We left appropriately full and impressed.

It was great to connect with Kindred Eats on this culinary level. Kudos to the team and Executive Chef Max Spittler, who could be seen working away in the kitchen the duration of the visit.