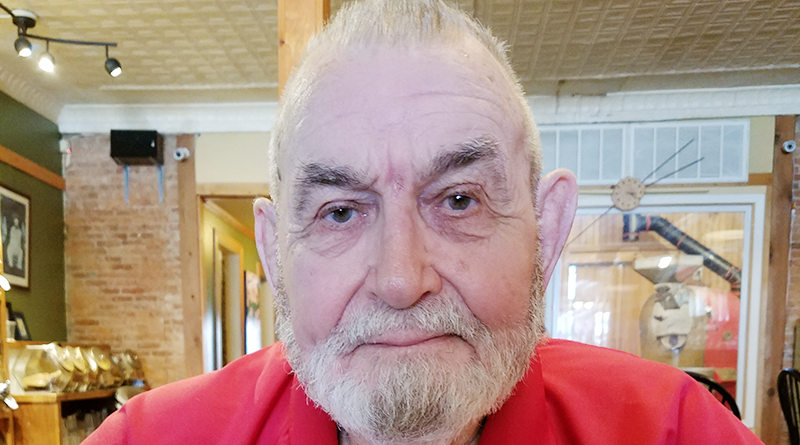 Marv Hankinson’s life has changed quite a bite since 1952 when he decided to quit Spencerport High School without telling his parents.

Every day he took his lunch money and headed off to “school.” His parents were none the wiser until they realized that they never received a report card. A quick call to the school revealed the truth. Hankinson’s father started charging him rent ($10 a week) for his room and board in their Greece home.

He needed to get to work, but after trying his hand at a variety of jobs, Hankinson felt at a loss as to what was next in his life. When a buddy from Holley chose to enlist in the U.S. Navy, Hankinson decided to join him.

It wasn’t long until Hankinson found himself aboard the USS Newport News headed to the Mediterranean. When the Navy asked for volunteers to join the war in Korea, Hankinson didn’t hesitate to raise his hand. He then boarded the USS Wisconsin and was on his way to Asia. Word soon came that a truce was signed as he and his shipmates were en route, so Hankinson never saw any action. He jokingly declares, “They heard I was coming and didn’t want to deal with me!”

He was discharged from the Navy on June 20, 1956, met his wife Leona on June 22, and became a recruit at the Monroe County Sheriff’s Office on July 2 of that same year.

“Everything came together for me in about two weeks,” said Hankinson.

After eight weeks of training, he was on the streets as a patrol officer. Hankinson recalled that in 1956, the sheriff’s office only had six patrol cars — three for the west side of the county and three for the east side. He and his partner drove the “northwest car.”

Hankinson said his goal as a law enforcement officer was to make a difference in his community, and he worked hard at this goal during his 38-year career in the sheriff’s office. He served as a patrol officer, detective, and corporal. As corporal, he helped develop the quartermaster unit, which orders and manages supplies for all four sheriff’s office bureaus (civil, court security, jail, and police).

One of his most vivid memories is of the time he captured a robbery suspect who had just held up the ticket office at the Starlite Drive-in theater in Henrietta. During his regular patrol that night, he stopped at the Rochester drive-in and took a moment to watch a Kirk Douglas movie playing on the big screen. He got the call about a robbery at the Starlite and left to investigate. He pulled over the suspect at the Castle Inn on Scottsville Road in Chili and took the thief into custody.

He remembers that Sherriff Albert Skinner gave him a special reward for his service.

“He unlocked his kitchen and went in and got me a chocolate chip cookie from his private cookie jar. It was his equivalent of an Oscar for best performance by a road patrol deputy,” he recalls.

Today, Hankinson still works hard to make his community a better place. He is an active volunteer with a variety of organizations including involvement with the Lions Club and Project New Hope. Project New Hope provides all-expense paid retreats for returning combat veterans and their families.

“It is our goal to provide combat veterans and their families with the education, training, and skills necessary to manage their lives after wartime service. Repair of relationships is a primary goal,” according to projectnewhopeny.com.

He is also involved with Lions Camp where challenged adults and youth can take part in a variety of summer camp activities, such as swimming, fishing, and outdoor sports.

Hankinson is president of the Monroe County Sheriff’s Office Association of Retirees. SOAR seeks to provide social engagement for law enforcement retirees as well as advocate for their interests.

“Marv has many years of previous experience in leading various social and charitable groups and he does a terrific job in keeping SOAR on track with his calm, controlled demeanor. It’s been a pleasure to work with him,” said SOAR Vice President Robert Kehoe.

Hankinson is in his 80s now, but is showing no sign of slowing down. At the time of his 55 Plus magazine interview, he was actively planning a law enforcement night at a Rochester Red Wings game in June.

“Our purpose is to promote fellowship between members, keep abreast of the current advancements being made within the agency and to render voluntary assistance to the Office of the Sheriff, Monroe County, New York.” — monroecountysoar.com

In March of 1980, 34 sheriff’s office retirees held the first Sheriff’s Office Association of Retirees meeting at the Monroe County Jail to create the by-laws and form an officer nominating committee. In January of 1981, they elected their first president, retired criminal investigation division investigator Jeanette Ferraro.

Since then SOAR has grown to more than 250 members. The organization hosts social gatherings for their members and voluntarily assists the sheriff’s office when needed. They have also installed memorial plaques for fallen officers around Monroe County.

SOAR advocates for its members with the Monroe County Legislature as well. It is working to reinstate the retiree health care benefits outlined in members’ retirement packages. Monroe County changed the retiree benefits package in 2017, and advocates from SOAR are striving to ensure that retirees receive the benefits they expected upon retiring.

SOAR Treasurer Larry Crawford summed up the organization’s importance to him and the community of sheriff’s office retirees.

“SOAR is important to me because it gives a lot of the Monroe County Sheriff’s retirees a chance to keep in touch with one another by getting together at least four times a year for just social events. It gives us a chance to get people together when necessary to fight for different causes.”