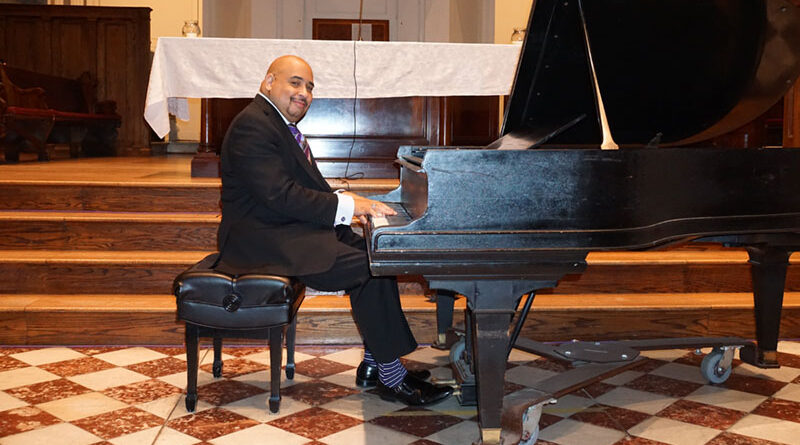 Paul Boutte has been playing since he was 14

You can’t imagine Paul Boutte spending much time away from a keyboard.

“Music has always been my life,” the Rochester musician says.

Boutte’s talent for music has taken the 58-year-old to churches, indoor and outdoor stages and studios from Rochester to New York City. Able to play gospel, jazz, rhythm and blues and even rock on the organ or piano, he can lift up church congregations and make other music lovers tap their feet and clap.

“There’s a lot of people who play the notes, but he really feels the music,” says Jack Whittier, president of the board of directors of the nonprofit Rochester Music Hall of Fame (RMHF).

In addition to performing, Boutte is the minister of music of Rochester’s Zion Hill Missionary Baptist Church. He celebrated his 20th year as director of Spiritus Christi Church’s Gospel Choir on Nov.15, and teaches gospel music at the SUNY College at Brockport.

Boutte also produces movie soundtracks and other musical projects, and even hosts his own weekly show on radio station WDKX, “Sunday Morning Gospel.” Perhaps best of all, the father of three grown children is nowhere near the end of his career in music.

Boutte acquired his love of music while listening to the legendary rhythm and blues (R+B) organist Anthony Mitchell. Mitchell used to stay at the Boutte family’s home on Rochester’s Saint Clair Street when playing local Black clubs with his group, Samson and Delilah. While in town, Mitchell and his group often played at the now-defunct Pythodd Club, a famous jazz spot in Corn Hill.

“He let me come to the Pythodd when I was a kid just to sit and watch him play,” Boutte says. “I used to just be in awe of him.”

Listening to such musicians perform helped Boutte learn how to play the organ by ear. At the age of 14, he sat down before the organ of what was then the Lighthouse Church of God in Christ. After the sounds of the gospel hymn “Amazing Grace” died away, the church’s pastor offered to pay the teenager for playing at its services. Boutte’s father had a better idea.

“He asked them to pay for my music lessons,” Boutte says.

Though his music instructor taught him how to read music, Boutte continued to sharpen his skills at the keyboard through listening to and playing music in churches around Rochester. He learned how to play the piano while attending Monroe Community College, but has always preferred playing the Hammond B-3 organ.

“That is the only organ in gospel music in the Black church,” Boutte says. “It’s deeper sound is different from anything else.”

Boutte worked for different local firms in sales or customer relations, but music remained his primary focus. James Richmond, co-founder and head of the popular funk, R+B and jazz band Prime Time Funk, first heard him play at the Mt. Olive Missionary Baptist Church more than 30 years ago. Richmond was the Geneva church’s piano player at that time.

“He came and played, and I was just floored,” Richmond says. “He was just remarkable.”

“Paul is, first, a great human being,” Richmond says. “He cares about everybody.”

Each year, RMHF inducts musicians who have contributed to the creation of musical excellence and have ties to Rochester. Prime Time Funk always plays at the ceremony.

“I always ask Paul to play with us,” Richmond says. “He has that gospel foundation, and adding that to what we do just gives it more legitimacy, more heart.”

That gig brought Boutte together with Alfred “PeeWee” Ellis when the acclaimed saxophonist and composer was inducted into RMHF in 2016. Ellis once led the band of the late Godfather of Soul James Brown. Some members of that band were onstage at his induction with their instruments.

“I was actually playing organ with the James Brown horn section,” Boutte says.

In addition to playing at RMHF’s induction ceremonies, Boutte is also a longtime member of the nonprofit’s board. Whittier counts him as a good friend, and an asset to the board.

“He’s in tune with the city’s music scene,” Whittier says. “We really appreciate that, and he’s really willing to share his perspective.”

Boutte has also played at the Rochester International Jazz Festival and the KeyBank Rochester Fringe Festival, and was the music director of Rochester’s downtown 4th of July celebration for two years running. Despite his age, he isn’t ready to slow down.

“Now that I’m older, it even means more to me to be in the gospel and musical community, playing things for the city and also mentoring young musicians.”