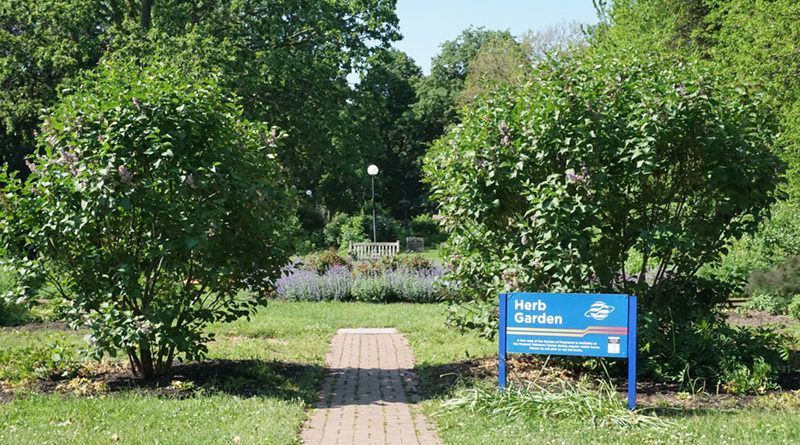 Garden of Fragrance seen as a haven right in the middle of Rochester.

Temperatures in the 90’s couldn’t keep Joanne Barry away from the Rochester Museum and Science Center’s Garden of Fragrance.

“I love doing this, otherwise I wouldn’t be here,” the 85-year-old said, before getting back to her weeding.

The Hilton resident is just one of the members of the Rochester Herb Society who tend the Garden of Fragrance. About every two weeks from April to October, four or five herb lovers gather together to care for its plants, put in new ones, and in general prepare the gem to shine for the public.

Sandra Happ, who leads the team that cares for the Garden of Fragrance, was there on May 26.

“I’m going to do some weeding, and I’m going to plant some annuals today,” she said, as she prepared to plant dill and rosemary.

Created in 1958 by the late Harriet Hollister Spencer, a local rose expert and civic leader, the Rochester Museum and Science Center’s 1,200-sq.-ft. Garden of Fragrance has eight separate bed for herbs. The Monks Herbs garden features such plants as Joseph’s coat and Bible leaf. Next to it, the Bitter and Repellent Herbs garden offers Roman wormwood, horehound and other plants that repel insects. Across the way, the Culinary Herbs garden contains such delights as thyme, mint and basil. The herb beds surround the site’s Rose Garden.

All of the Garden of Fragrance’s herbs serve a purpose — and some more than one. Horehound repels pesky insects, lavender is aromatic and edible, and fever few has medicinal qualities. 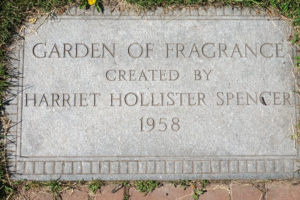 “It helps to relieve a fever,” said Rochester Herb Society treasurer and past president Jean Bolster, who helps tend the Garden of Fragrance.

The Rochester Herb Society has long been a haven for those who love raising their own herbs.

“The club is very involved in growing and using herbs in numerous ways, such as cooking and aromatherapy,” said co-president Jean Heaney.

To those ends, the society holds monthly meetings at which its members can learn how to grow herbs and use what they grow, and can share recipes and other information.

“Each month, there is a presentation of the ‘herb of the month,’” Heaney said.

Most of the Herb Society’s members are at least 55 years of age — Heaney is 79 — and some have long belonged to the organization. Barry joined about 27 years ago, and has been the society’s president and vice president in the past. Bolster became a member back in 1996.

“I had recently moved back to the area, and my neighbor was a member,” Bolster said. “I frankly thought it was a good social opportunity.”

While bringing her together with new people, the Herb Society also gave the 75-year-old Livonia resident the chance to share something she loved with them.

“I enjoy working in all gardens,” Bolster said. “Gardening is good therapy. You can really connect with the garden, and everything else kind of melts away.”

Bolster and other Herb Society members use what they’ve grown in tasty meals at home, at the organization’s monthly meetings, and at special events.

“Once a year, in March, we have a ‘soup meeting,’” Heaney explained. “We have soup and cheese and crackers and breads that are made using herbs.”

The society also creates and sells “therapy packs” that contain rice, along with chamomile, lemongrass peppermint, rosemary and other herbs.

“They’re to relieve aches and pains,” Bolster explained. “There’s one that goes around your neck. You can put in the microwave and heat it or in a freezer, as a cold pack.”

Hillary Olson enjoys visiting the Garden of Fragrance, even when she’s at work. The president and CEO of the Rochester Museum and Science Center can stroll through the site on her way from her home on the RMSC’s grounds to her office.

“It’s a haven right in the middle of Rochester that anyone can walk to,” Olson said. “People are able to sit and meditate and relax in that space.”

Olson sometimes picks a few leaves from an herb while visiting the Garden of Fragrance and crushes them, just to enjoy their feel and scent.

“If I end up with a little bit of rosemary or lavender, or something like that, it just changes the smell and the sensory experience for me,” she explained.

Olson praised the Herb Society for taking care of the Garden of Fragrance, but when members of the organization showed up at RMSC on May 26, the garden’s paths needed mowing and weeds had multiplied.

“With the rain, and now the nice weather, the weeds are really growing rampant,” Barry said.

Olson said that when COVID-19 hit the area, RMSC was forced to close its doors, lay off some of its staff and cut the hours of those who remained. Those still on the job have been too busy to mow the Garden of Fragrance.

“All of our facility staff is working on how to make sure that we have all of our pieces in place for social distancing and signage and everything, and rearranging everything, for when we reopen, which will be at the beginning of Phase 4 for the Finger Lakes area,” she said. “We will mow at some point in, probably, the next week, as we get to it.”

On May 29, Gov. Andrew Cuomo announced that the Finger Lakes region could enter the second phase of his administration’s plan for reopening the state for business and recreation. If all goes well, the region could move to phase four within a few months.

In the meantime, Barry and other Herb Society members will continue tending the Garden of Fragrance.

“We’re just mainly taking care of the beds, and trying to make them look nice,” the grandmother said.

The Rochester Herb Society currently has over 50 members. Those who want to learn more about or join the organization can go to https://rocherbsociety.com/.

Photo: Main entrance of the Garden of Fragrance on the grounds of Rochester Museum and Science Center, 657 East Ave, Rochester.