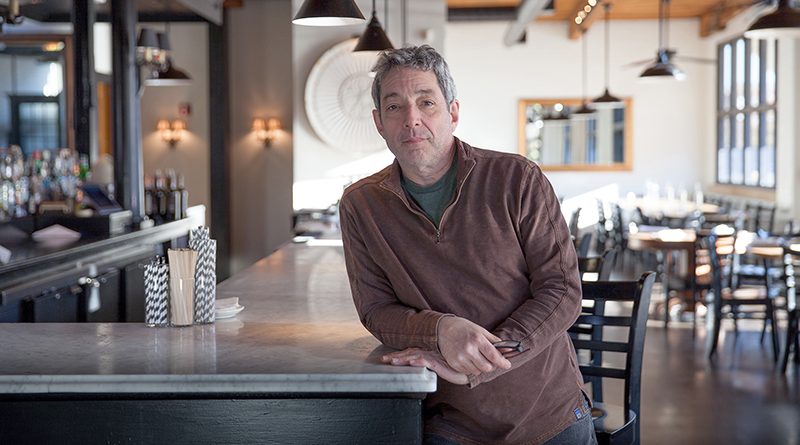 Jerry Serafine was hands-on when it was time to renovate his 2 Vine restaurant in 2016. And when he is not busy at his eatery, he is involved in restoring old buildings in Rochester

Jerry Serafine found success in numerous careers in life. However, his ability to marry his love of renovation and restaurant entrepreneurship continues to create happiness almost two decades later. Serafine owns 2 Vine, 24 Winthrop St. in Rochester, a staple in the community since 1999. He worked on literally building up the business, which was a new construction when it arrived in the area. Even while he was charting different paths earlier in his life, there was always something about the restaurant industry.

“I have always loved hosting big dinners and providing people with food and good atmosphere even before I owned a restaurant,” said Serafine, 62, of Brighton. “It’s something I have been doing since I was young. But it still surprises me when I look back and see how everything has worked out so well.”

Serafine started his career in the advertising business and the production business in New York City, where he produced commercials and created concepts for music videos. Sometimes creating one music video would take 24 to 36 hours of straight work. It was exciting and exhausting. However, the workload, the hustle, the industry eventually began to take its toll on him. While he was attempting to avoid burning out in one area of his life, in the back of his mind, being a restaurant owner remained. He had remained connected to his roots in Rochester and kept driving around the building where 2 Vine exists. And he just couldn’t get it off of his mind.

“It just seemed like a good location to start something new. And it matched with my mentality because at that time in my life, I needed something new,” said Serafine.

Then in 1999, he joined forces with Jerry Vorrasi, who owned Brasserie at Eastman Place. Together they built up the reputation of 2 Vine. Serafine eventually took sole ownership over the restaurant in 2003.

“Jerry [Serafine] has a wonderful talent, as he thoughtfully takes historic structures and restores their charm while bringing them up to date,” said Mark Siwiec, of Rochester, a loyal customer. “He appreciates the importance of renovating our city’s beautiful buildings while ensuring the integrity is always kept.”

Every industry must shift. Keeping an eye on dining trends, he noticed guests were looking for restaurants that had the quality of a fine dining restaurant yet didn’t always want to spend an incredible amount of money. He looked at how he could combine great ambiance with good prices, continuing a goal to keep the restaurant fresh and evolved.

“We could see that people really enjoy going out more than ever before, especially the younger generation. I see them out in our restaurants far more than I saw a decade ago,” said Serafine. “But they want a more casual feel and they definitely want it to be more affordable. They don’t want to feel like you have to get all fancy and dress up just to have a meal.”

While Rochester fares comparable with much larger cities as a foodie haven, Serafine noticed a distinctive difference. He said people are willing to spend more money in bigger population areas, and because there are more people, there can be an expansive array of restaurants from lower priced fare to  expensive.

“A restaurant in our region, people don’t want to just drop $300 to $400 on dinner. They don’t want to just spend $100 on a bottle of wine.  That might work in New York City because of the size of their population. We wanted to make things more affordable and just make our restaurant more approachable.”

Some of the ways he does that is looking for high quality, different cuts of meats that are not at the highest price as well as searching for excellent wine selections that are priced closer to the norm. His restaurant also has been doing farm-to-table for years, a social movement which promotes local food at restaurants and school cafeterias being purchased directly from the producer. That may include a winery, brewery, ranch, fishery or farm. The term farm-to-table celebrates the idea of  knowing where your food comes from. The restaurant also focused on making more items that are gluten-free, vegan, nut-free and other dietary exceptions.

“We have gotten positive responses for our selections,” added Serafine. “We didn’t have to sacrifice quality to make ourselves more assessable.”

In his spare time Serafine renovates old homes and commercial buildings, restoring them to their original state. He took that love of creating something new to revamp the restaurant. Then in 2016, he wanted a more modern look for the restaurant and oversaw a complete renovation of the restaurant in less than two months.

“We really did a genuine remodel that we were very proud of,” said Serafine. ”The restaurant was refurnished, wood floors replaced tile, walls were knocked down so it could create a larger open concept.

“The renovations at 2 Vine are stunning,” said Siwiec. “In just five weeks and with his own two hands, Jerry took a well-known space and revamped the restaurant to a clean and beautiful design with an open and airy feel with lots of natural light. The new 2 Vine is a classic restaurant that reminds me of a hot spot you would find in Tribeca.”

Another change he has seen is the growth of the food industry being elevated to social awareness. Celebrity chef shows such as Hell’s Kitchen, Top Chef, Iron Chef, Master Chef and Food Network Stars has done for cooking what Dancing With the Stars did for ballroom dancing.

“We found that a lot more people are going into the restaurant business as a chef as a real career path,” said Serafine. “

He continued to improve the restaurants in various ways. It ranged from starting demonstrations from winemakers, growers, guest chefs, menu advancements, roasting its own coffee to increased presence on social media.

Well, his customers have agreed with many of his changes throughout the years.

“I have been a regular at 2 Vine since it opened, and even after all these years, it still remains my favorite place to dine in Rochester,” said Lauren Dixon, CEO of Dixon Schwabl, an advertising agency in Rochester. “The restaurant is located in such a beautifully restored, historic building that equally complements its high-quality, delicious food and impeccable service. For 18 years, 2 Vine has been one of Rochester’s most loved and well-known restaurants, and it has earned that coveted spot for a reason.”