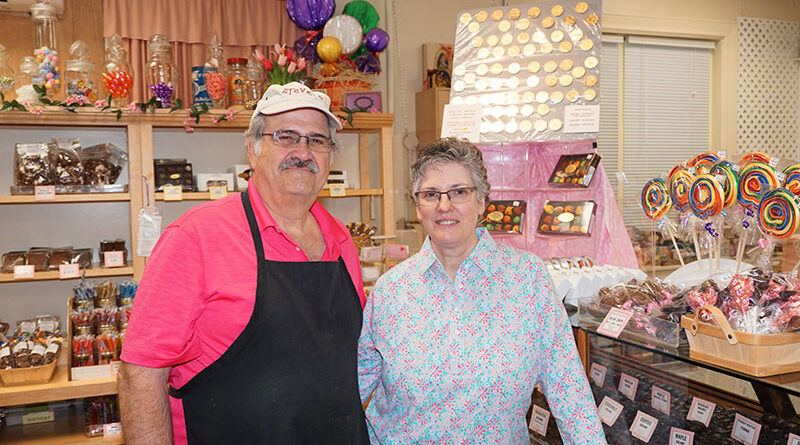 You might say that Kevin Stever has found his sweet spot.

“I still enjoy making the candy, and the business is a lot of fun,” said the 63-year-old president of Stever’s Candies, Inc.

Candy lovers from around the area have long headed to Stever’s Candies to sample its delicious wares. Located in a three-story building on Rochester’s Park Avenue, the company offers hundreds of delights, including soft, succulent caramels, dark chocolate-dipped strawberries, fresh fudge and a host of other unique goodies. The company employs as many as 14 part- and full-time workers depending upon the season and makes all its products at its combination factory and showroom.

Stever’s has been a family affair right from the beginning. After serving in World War II, Douglas Stever, Kevin’s late father, apprenticed with a veteran candy maker in Norristown, Pennsylvania. Upon finishing his time there, he moved to the Rochester area with his late wife, Hilda, to open the first Stever’s Candies shop and factory.

“They opened a business on [South] Goodman Street together, a very small store, in 1946,” Kevin said.

Sugar was still rationed back then, so the couple couldn’t make chocolate.

“They made a lot of peanut brittle,” Kevin said. “They made some hard candy, cream wafers and things like that.”

Stever’s Candies eventually came to occupy sites in Henrietta and Park Avenue. Kevin remembers working in its suburban shop as a young boy.

“I would fill in in the store and help with packaging and sort things or bag jellybeans,” he said. “I was pretty adept at that by about 7 or 8 years old.”

“I’m a Stever,” Keane Dziduch said. “I grew up in the business.”

The Henrietta store closed in 1970, but Kevin Stever continued working part-time for his family’s business. After graduating from St. John Fisher College in 1979, he became a full-time employee and started learning the secrets of candy making from his father.

“I learned how to make batches of candy,” Kevin said. “He really showed me how to do all of the formulations and the processes in the kitchen.”

While learning the business, Kevin met the woman who would become his wife. The future Leslie Stever was working in the display department of a local Sears department store and moonlighting as a cake decorator. Seeking additional work, she headed to Stever’s Candies.

“I came in here to see if they would be interested…in buying any of the gingerbread houses or sugar eggs or that kind of thing, that I made,” Leslie said.

The company ended up buying some of her products. In 1980, Leslie left Sears to work for Stever’s Candies full-time.

“I always was interested in the more artistic things with food, so it was a good fit,” Leslie said. “I really liked it right away.”

She and Kevin began dating in 1982. Two years later, they married.

After Douglas Stever died in 1984, the couple took over the running of Stever’s Candies—Kevin became the company’s president and Leslie its vice president. Hilda Stever continued working in the business, doing everything from running the store to the bookkeeping until she stopped in 2007.

By then, Dziduch was doing the firm’s books while holding a full-time job in banking. Hilda died at the age of 92.

“We just closed for a week to calm things down in March of 2020. Then we reopened,” Kevin said. “We were deemed an essential business.”

The firm only offered curbside service for a time and then reopened to limited foot traffic.

Up to 10 people can visit Stever’s Candies’ showroom now, though they are encouraged to socially distance. Those who step inside can enjoy some of Leslie’s work.

“I still do a lot of the decorating work (and) the display work,” she said.

After working in banking for many years, running a now-defunct sign company with her late husband, Frank, and doing Stever’s Candies’ books on the side, Dziduch became a full-time employee of her family’s firm. The 69-year-old mother and grandmother now works on the books one day a week and spends the rest of her time packaging its wares.

On a sunny Friday, the Johnsons drove from their Greece home to the showroom of Stever’s Candies to pick up an order of specially made suckers.

“I have a baby shower coming up, and we’re going to use Stever’s candies as our favors,” Denise Johnson said. “We like to support the business and the chocolate is fabulous.”

In addition, the candy maker is willing to make candies in a variety of shapes.

“They’ll make any designer style that you’d like that’s suitable to the occasion,” said Denise’s husband, Timothy. “It’s a nice treat to hand out.”

The couple chose animal-themed favors for the shower.

Photo: Kevin Stever and his wife Leslie are president and VP of Stever’s Candies.