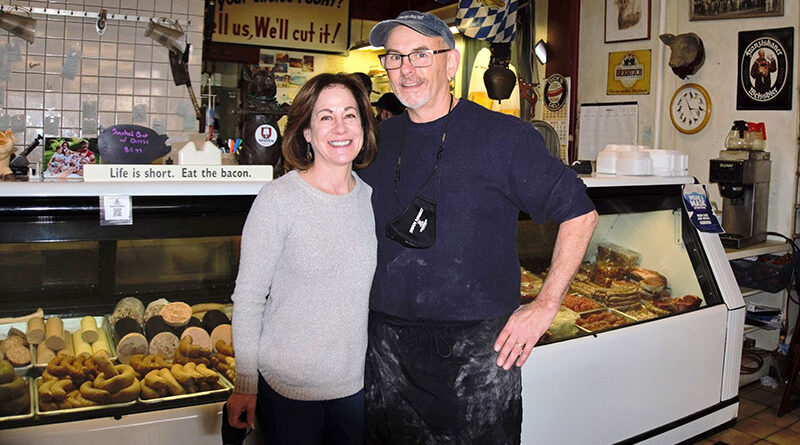 Market offers a plethora of German meats, beers and more

“I love to hear people be so happy with a lunch, or a sausage, or whatever we make for them,” the 58-year-old Irondequoit resident said.

Swan has the feel of an old German butcher shop, market and delicatessen. Its walls are lined with exotic spices, cookies, pastries and other fare. German beer is sold in bottles and on tap. Sausages, cold cuts and cuts of meat fill the refrigerated counter that dominates Swan’s public area. The sausages and cold cuts are made from scratch either at its original location on Rochester’s Parcells Avenue or in a second building that Fischer owns about two blocks away.

Richard Yates headed to Swan on a Saturday in early March just for its meats.

“Their butcher case, with the German types of sausages and deli meats, is very, very high quality and delicious,” the Brighton resident said. “They make a cognac salami that’s really delicious, and no one else has that.”

“My oldest sister lived in Germany for a year after high school and introduced this to us,” he said.

Customers can shop for dinner, then lunch on dishes that are made fresh that day. Though Swan’s specializes in German foods, other cuisines are also available — the Hungarian goulash is great. You can also enjoy the market’s products at some local restaurants.

“They have our stuff at the Genesee Brew House, Rohrbach’s [Rohrbach Brewing Company], the Irondequoit Beer Company,” Fischer said.

The solid brick building that the Swan calls home has housed a German meat market for almost 100 years.

“The daughter of the guy who built the store, and she died when she was a little over 100, brought me the original paperwork, as far as the specs for the building,” Fischer said. “Pretty cool stuff.”

Fischer caught sight of Swan more than two decades ago, when he wanted to take his working life in a new direction. After 17 years as a butcher and meat manager for Wegmans Food Markets, he’d decided that he didn’t quite fit into the corporate world.

“When somebody asked me what I thought about something, I gave them my honest answer,” Fischer said. “Not always what they wanted to hear.”

Gunther Schwahn, the market’s previous owner, had put the market up for sale, and Barry considered buying and running the business. Liz, his wife, was more than a little concerned about her husband leaving a good job at Wegmans to strike out on his own.

“We had four children, a mortgage, and it was very unknown,” she said. “We were coming into something we didn’t know and I was terrified.”

Barry admits that some important aspects of running Swan were new to him back then.

“I thought of myself as a pretty good butcher,” he said. “The sausage part of it, that was certainly something that I was not familiar with.”

Before signing on the dotted line, Barry spent time with Schwahn, trying to see how well running Swan would fit his aims.

“I would work there for nothing for quite a few weeks on my day off, just to see if it was something I wanted to do,” Barry said.

On April 23, 2000, at the age of 37, he and Liz became Swan co-owners. Schwahn initially agreed to work with Barry for eight months while he learned how to run the business — and make sausages.

“He was to stay with me and teach me,” Barry said. “Here it is 21 years later, and he still kind of looks over my shoulder once in a while.”

Swan is very much of a family business—four of its seven employees are family members—and everyone works together. Barry runs the place, butchers the meats, makes the sausages, serves customers and takes on all sorts of other tasks, and 59-year-old Liz mainly takes care of Swan’s bookkeeping. Their son, Eric, calls himself the business’s “utility guy.”

“I’m making sausage, helping in the kitchen, running the counter.” he said. “I do all of the electronics.”

Eric worked at Swan while growing up and when not away at college. After graduating from Binghamton University, the talented athlete spent three years in Israel playing lacrosse for the Israel Men’s National Team. Returning to the US in 2019, he began working full-time in the family business.

“I’m not the kind of guy that sits behind a desk,” Eric said. “I can work with my hands and see a finished product that I’m making, which is kind of cool.”

James Power’s accent betrays his English roots. Barry and Liz’s son-in-law was working as a landscape gardener when he met the couple’s oldest daughter, Ashley, who was teaching physical education in London. Four years later, they moved to the Rochester area, where he took a job with Swan that allows him to follow his real passion — cooking.

“I’ve had the opportunity to really go back in the kitchen and make the gravies and all the soups, and stuff like that,” he said.

Power, who also serves customers and runs the Swan’s catering operation, will celebrate his seventh year with the business on July 4.

Swan grew until it encompassed two buildings, both of which are now paid off. Then the coronavirus pandemic hit, the market’s catering business dried up and state regulations prevented customers from coming in for sit-down meals.

“We generally had a pretty good lunch crowd,” Barry said. “We lost a lot of revenue, with not serving lunches for a year.”

The market managed to survive on its retail and take-out customers and Barry was able to keep all of his employees on the payroll. After virus infections fell in Monroe County, Swan reopened for lunch on March 3.

Barry recognizes that he can’t continue to perform the physical labor of running the Swan Market forever. He’s already had one hip replaced and underwent surgery to deal with a problem in one wrist. Though Eric and James might want to take over the business sometime in the future, Barry isn’t sure he could ever actually retire.

For more information on the Swan Market, go to: https://swanmarket.com.

Photo: Liz and her husband Barry Fisher have owned Swan Market in Rochester for more than 20 years.