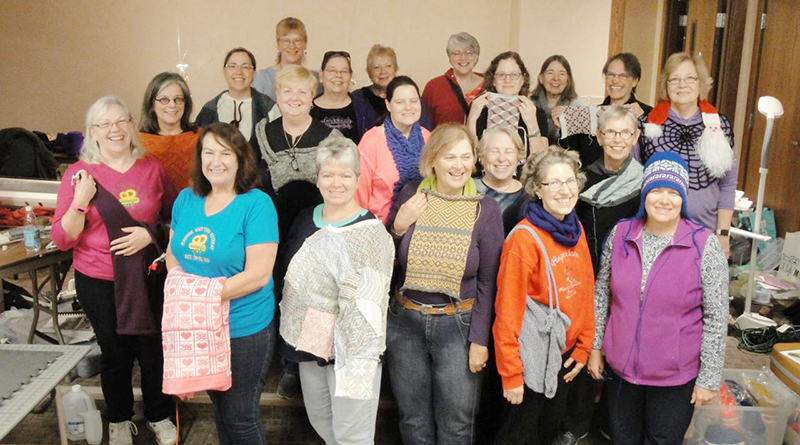 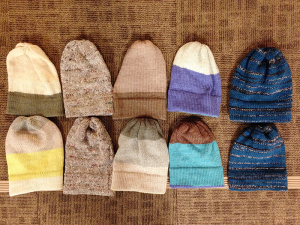 Joanne Andersen, its leader, has been involved with the Cortland-based group since 1992. She had purchased her first knitting machine nearly a decade earlier and was hooked immediately. After settling in Cortland upon her husband’s retirement from the military, Andersen discovered Silver Needles Machine Knitting Club (also known as Finger Lakes Machine Knitting) and joined in.

“Everyone helps everyone else,” Andersen said. “Everyone gets stuck on something now and then. The group is wonderful to pitch in and help each other.”

Meeting monthly, the group of 30 sometimes takes on the same project for the month. Members suggest and agree upon what they’ll do next. Other times, the group members help one another with different individual projects.

Using a machine offers several advantages over hand knitting. Some feel that machine knitting can be easier on the hands than knitting manually.

“It’s a lot quicker,” Andersen said. “You can be creative quicker.”

She likes how the machine helps her projects turn out more even, rivaling store-bought knitted items. Though machine knitting’s speed and consistency makes some people think it’s “cheating” over using knitting needles, Andersen contests the notion.

“I challenge anyone to just sit down and machine knit,” she said. “You have to know quite a bit. It’s like using a sewing machine. In a sense, they’re cheating also, instead of hand sewing. We’ve just found a quicker way to do it.”

The group hosts a seminar in September which has attracted up to 100 people, some from as far away as California. The club also hosts a three-day retreat on Casowasco Lake in Moravia, from Oct. 27 through Oct. 29, 2017.

“We always keep learning machine knitting and learn new techniques all the time,” Andersen. “It doesn’t get boring. It never does the work for you. It depends upon how much you put into it as to what you get out of it.”

The group started in 1984. Members meet at 10 a.m. on the third Saturday of each month except June and December at the Ramada in Cortland. The group considers anyone under 18 as an “honorary member” and minors don’t pay annual dues of $51.50.