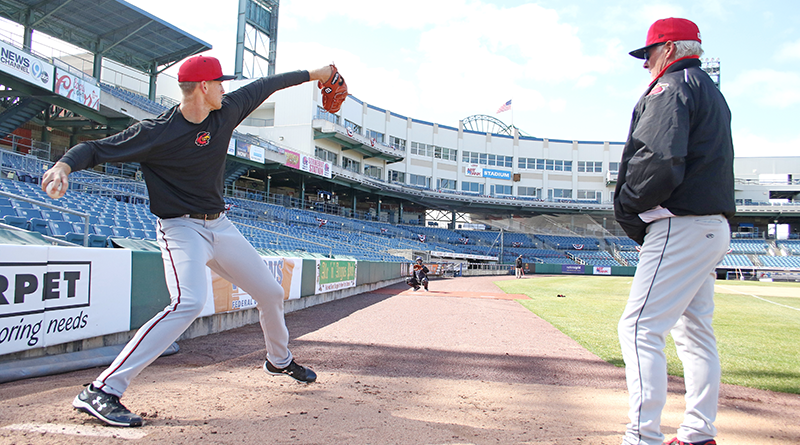 It’s a warm August night and as the players warm up and fans start arriving at Frontier Field, Red Wings pitching coach Stewart “Stu” Cliburn is at work doing the job he’s loved for 27 years.

That’s helping his players do the best they can today, get to the next level in the future and enjoy the game as much as he has since he started as a pro player in 1977.

“I look back on my career and how many coaches helped me realize my dream and I want to do that for the guys we have here,” says Cliburn, 60. To do that means one size does not fit all. Like any good teacher in a classroom, some will seemingly pick it up on their own while others will require careful prodding, nurturing and encouragement.

“You do have routines but you’re dealing with 13 different individuals. I try to relate to them in a professional manner. There are times you have to have a stern voice but it’s their career. We’re here to help them not hurt them. You have to stand by your players, be patient, treat them with respect and help them learn from their mistakes,” he said.

Even though he doesn’t want to hurt his players, releasing or waiving them is “the worst thing” coaches like Cliburn have to do, he said.

“It’s a tough few days but it’s not the end of the world. If you’ve been around long enough as a player, you’re going to get released,” says Cliburn, who experienced it a few times in his career. It doesn’t mean you can’t play in the International League or the majors for someone else.”

Not surprisingly, Cliburn says pitchers and hitters today are bigger and stronger than yesteryear.

Just check the left field velocity meter at Frontier Field to see how hard IL hurlers throw. “There are more of them because of the strength and conditioning programs we have today,” Cliburn explained.

Injuries are also up because of the hard throwing, but procedures such as Tommy John surgery have them rebound quickly.

“At least they don’t throw as long. There are fewer complete games pitched today as flame-throwing relievers finish up,” he said.

Fans might not always like it, but coaches like Cliburn must often monitor a pitcher’s pitch count. When it’s up, the pitcher’s coming out before an injury happens no matter how well he’s doing or how fast he’s throwing.

The 2017 season is Cliburn’s fifth in Rochester but not consecutively. He’s been with the parent Minnesota Twins for 25 years but has served the organization in places like Chattanooga, Tenn., New Britain, Conn., Fort Wayne, Ind. and Single-A ball in Florida.

He attributes his nomadic life playing baseball as the reason for marrying late at age 38 to his wife, Cyndi, who joins him in Rochester sporadically during the season.

Twinning on the Twins

He’s close with a lot of current and former Twins organization members but none more than his twin brother, Stan, who managed the Wings in 2006 to the Governor’s Cup championship series with Stu as the pitching coach.

The Cliburn brothers grew up in Jackson, Miss., where their dad had an auto parts and service business.

Cliburn is grateful for his life in baseball but imagines he’d have been involved in cars if it were not for the game. He’s interested in life outside of baseball but said he is grateful he hasn’t had to face it yet.

A friend he met in spring training, Gene Young, offered up his home in Penfield for Cliburn to stay in during the IL season. Not that there is a lot of time to spend anywhere but a ballpark in the five-month, 142-game IL regular season. The season can also be lengthened deep into September by securing a playoff spot.

Cliburn says his home park, Frontier Field, is fair to both pitchers and hitters. “The infield’s not real fast. A lot depends on the weather. It plays both ways. The ball travels more when it heats up here, which is not a lot. When it’s cold and windy — like April — the ball stays in the park.”

He likes Pawtucket, R.I. for fan interaction and the park’s history as well as Buffalo, another place he and Stan have in common during long baseball careers.

When he does get rare time or days off, golfing at area courses — such as Eagle Vale, Blue Heron Hills, Ravenwood in Victor, and Lake Shore Country Club — is a favorite pastime along with fishing for salmon and lake trout on Lake Ontario.

“The great thing about golf is you can play it at any age,” he says. “The ball’s sitting still, but it’s still so hard to hit.”

For Cliburn, Dinosaur Barbecue downtown and Trata are his two favorite area restaurants when time allows; otherwise, dinner is at the park.
Good old-fashioned Bud Light is a longtime American favorite of many ballplayers like Cliburn, but these days, Red Wings’ manager Mike Quade has introduced Cliburn to wine.

Rochester puts him in the right place for one of the many fine Finger Lakes varieties.

Instead of going home to Fort Myers (the Twins’ spring training home) the past few off seasons, Cliburn has broadened his coaching to include winter ball in South American countries including Venezuela, the Dominican Republic and Puerto Rico.

“Winter-ball leagues kind of found me,” he says about the off-season work that is not affiliated with the Twins organization but minor league players are encouraged to participate in.