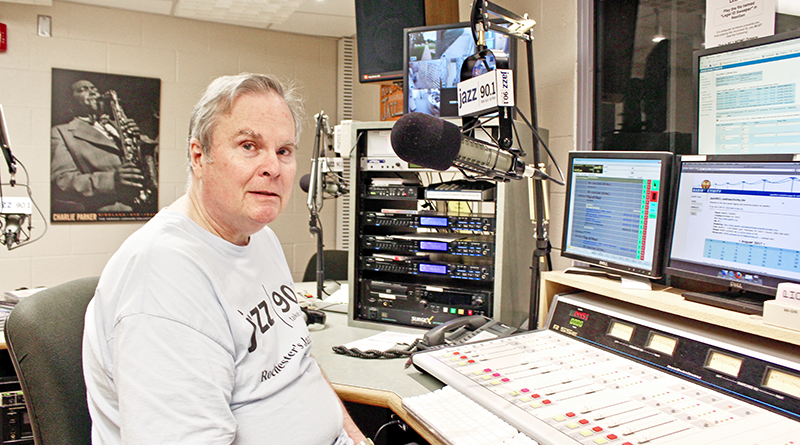 Volunteers of a certain age make all the difference in the world at Jazz 90.1

Rob Linton is the station manager of WGMC-FM, Jazz 90.1 in Greece. When he made that statement, he gestured around the room to two of his radio DJs — not “radio personalities” or “on-air talent,” but “deejays.” In verbal shorthand, he also refers to them as “voices.”

The two voices in the room — Phil Dodd, 69, and Kim Corcoran, 61 — are part of a group of more than two dozen volunteers who get the work done and the tunes played on Jazz 90.1.

Most of the on-air staff is comprised of volunteers, and many of them have attained a certain age and are ready for something else in their lives.

“These people don’t want to just sit around,” Linton said. “Retirees who are used to being active and doing things come to us and say, ‘I want to do this: I finally have time.’”

Corcoran is an example.

“I’m from the terrified school,” she explained. “I was a total volunteer, a total newbie at the age of 61. That’s what’s so important — when you get to be a certain age, it doesn’t mean you shouldn’t be learning new things or at least attempting to. Don’t be afraid and don’t be terrified — do it anyway.”

Dodd started volunteering at the station 22 years ago, working a full week as an office manager for the state, then coming in to man the air chair on weekends. Now retired, he’s got a three-hour show five days a week.

“I was always interested in radio, from the time I was a kid,” he said. “A big part of my life was listening to the radio. When I went to Binghamton University, I was on the radio for three years. After that, while I always had the interest, you couldn’t make any money in radio and you can’t do what you want anyway. I got a full-time job working for the Developmental Disabilities State Operations. I was in charge of the office for the last 22 years, but had nothing to do with radio or music.

“One day I was at an event in Rochester, and I talked to the station manager. I asked, ‘You guys don’t really need anybody, do you?’ He said, ‘We’re always looking for people.’ So, a week later, I came in for some training, and the week after that I was on the air doing a Sunday night program. I remember the first time I was on the air, a couple of hours by myself. I thought, ‘This is great.’ I always had the interest. In fact, I did my own mixing at home with a little mixing board and two turntables and two CDs, and I made tapes.”

Linton said the jazz-only format began in the 1990s and deepened. Now it also airs music that has appeal to those who love jazz but like something different, too.

“We’re kind of the land of misfit toys here,” he said. “We’re the one place where a lot of musical genres that don’t have a home anywhere else end up. There are fans of avant-garde and Broadway and blues and fusion.”

Corcoran provides the Broadway fix every Sunday afternoon, a two-hour show she developed from scratch after a year spent learning and volunteering in the music library.

“I volunteered to be in the music library with music director Derrick Lucas for a year. I was so bad at that, putting music away,” she confessed. “I said to Derrick, ‘You know what this station needs? A Broadway show.’ He said, ‘Yeah. Let me talk to Rob.’

Corcoran said she was serious. “Not even knowing what a treadmill this would put me on. Then I had to make a demo thing for Rob and he said, ‘Sure.’ I had an hour show for about a year, then two hours — ‘Two on the Aisle.’”

The station got pumped up to 15,000 watts in 2004 and now reaches a 50-mile radius from Greece Olympia high school, where the station and studios are hosted. The school district holds the license, but the station pays all of its operational costs through fundraising. Having just two full-time employees helps.

About 25,000 people listen during the week, with the companion website www.jazz901.org garnering listeners from 15 countries and counting.

Linton said the station’s voices bring a maturity, enthusiasm and genuineness to the music and approach. There is a vital connection between DJs and listeners.

“What’s interesting about the folks here is a love or passion for the music and a knowledge that you can’t discover in a textbook or a library. These are people who love what they play,” he said.

“You can’t fool radio listeners. They tune into Kim’s show on Sunday. I listen to her show, and it’s just like she stepped off an airplane this morning after watching a couple of Broadway shows over the weekend. It’s that connection with radio listeners that you don’t find anymore. She says, ‘I’ll be saving you a seat.’ I literally feel like she’s talking to me, like we’re going to see the show.

“That connection in Phil with jazz — you cannot fake that. Commercial radio is not touchy-feely. It’s not connect with listeners; it’s how much money can we make? I got here, and I’m talking to listeners. We’re not trying to make stockholders happy; we’re not trying to make a corporate giant happy. I’m here for the people who are listening in their cars.

“Phil is playing big band music for people who used to dance to that music with their significant other who may have passed. Kim’s playing Broadway music to someone who’s as in love with the music as she is.”

Is Jazz 90.1 still looking for people? Linton said volunteers are always welcome. The only on-air shifts available at the moment are through the night. And he also stresses the music is broader than “jazz” might connote to some.

Dodd said the station has gone from smooth jazz artists in the 1990s to straight-ahead jazz of today. Half the station’s music comes from new releases every day, with Lucas poring through those new CDs and deciding what’s OK for the audience. The DJs pick what they want from those releases, and choose the rest of their show’s tunes out of the library — always something familiar, always something new.

He said although he does “big band” music, there are hundreds of new “big” bands and vocalists.

“This is a station that doesn’t just focus on the deceased artists,” said Linton. “It’s taking the music forward. Some stations only play John Coltrane and Billie Holiday and Ella Fitzgerald and that’s great. We don’t want people to think jazz has passed away — it hasn’t. Rochester is such a jazz town. We are very lucky to have that festival [Xerox Rochester International Jazz Festival] here. It’s pretty incredible. There are people from all over the country and the world who would do anything to have nine days of music like that.”

As for the station, “We have people who have walked in here and never stood in front of a group of people or talked into a microphone before, and before you know it, they’re talking to 20,000-25,000 listeners at a time,” said Linton. “It’s the last little slice of real radio that’s left.”