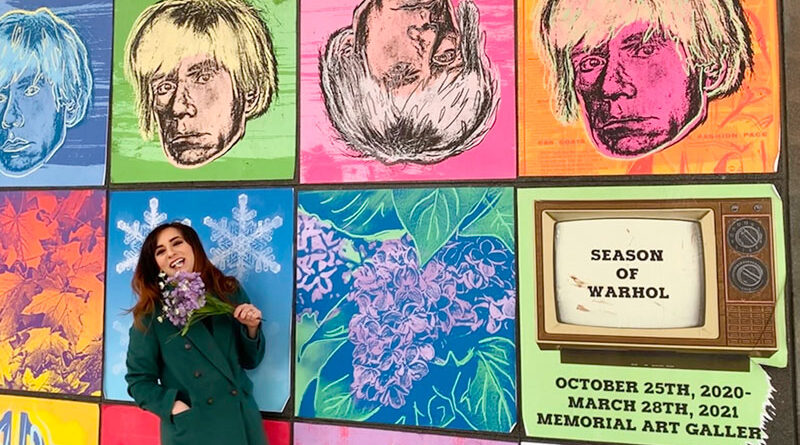 If you’re tired of quarantining at home, the Memorial Art Gallery offers a safe, controlled environment and an exhibition featuring the most influential artist of the 20th century: Andy Warhol.

It’s the first-ever Warhol exhibit in Rochester and runs through March 28.

You don’t have to be a Warholian club member to recognize his Campbell soup cans and Marilyn Monroe images that became iconic symbols of American life and culture. Warhol died in 1987, but as MAG Director Jonathan P. Binstock, explained, his influence and immense body of work are very much alive and relevant today.

Besides the soup can prints — and there are plenty of them in this exhibit donated by the Bank of America — there is far more of Warhol to see in “Season of Warhol.” The exhibition features selections from Warhol’s decades of photographic silkscreen printmaking. As an artist, author, rock music promoter, publisher, model, film maker and more, he left his mark on many aspects of American life and culture.

“In the end, I think Warhol was a conceptual artist and his greatest contribution was himself,” Binstock said. “Everything he touched fell into a much larger rubric. That rubric is a very complex lens or microscope through which we can still gain knowledge about who we are and the world in which we live.”

Warhol may not be around to interview, but there are few better to explain his work and importance in society than Binstock, 54, director of MAG since 2014. Binstock’s lengthy credentials include a Ph.D. in the history of art. Like Warhol, he’s involved in a lot of different areas related to art. He’s an expert in the art of the post World War II era, a teacher, a curator, an author and most importantly for the city of Rochester, a man entrusted with the mission of expanding the cultural footprint of our city.

Warhol influenced many in the art world and that includes helping Binstock get started, too.

As a young assistant curator in 1988 at the Pennsylvania Academy of the Fine Arts in Philadelphia, Binstock was asked to organize a large Warhol exhibit and became a “Warholian” in the process.

“Andy Warhol is a major artist and a complicated artist and I figured if I could somehow wrestle with Warhol then I would have something to really show for myself,” he recalled.

The Philadelphia exhibit, “Andy Warhol: Social Observer,” was successful and got Binstock started on an upward career path.

Besides the work donated by Bank of America’s “Art In our Communities Program,” there is material from The Warhol Museum in Pittsburgh and MAG’s curatorial team created a Warhol TV room showcasing Warhol’s television series, advertisements, video clips and appearances in a 1980’s theme room. He’s still a television subject today, most recently in Netflix’ “Pretend it’s a City” directed by Martin Scorsese with Fran Lebowitz, who wrote for Warhol’s “Interview Magazine.”

As busy as Warhol was, he watched television all the time, loved gossip news and read multiple newspapers.

His “Cow Wallpaper,” a staple of Warhol exhibits, is in the pavilion outside admissions. Yes, he loved animals, too. The “Season of Warhol” theme even extends beyond MAG’s boundaries. Rochester artist Michael Dellaria has outdoor Warhol-inspired images at several locations throughout the city including downtown on East Avenue.

Not surprisingly perhaps for a ‘60s through the ‘80s artist, Warhol appeals to an older than 55 audience with first-hand memories of him. But, although they might not know him as well, millennials and younger people recognize the soup cans and anyone who uses photographic tools like Snapchat or Instagram to make different colored images is using Warhol’s artistic idea. Most everyone knows how to turn images into multi-colored grids and filter images that look like they were made by Andy Warhol.

As Binstock explained, the artists of today are influenced by him even if they don’t know it. Marketing the artist’s brand, designing everything, figuring in popular culture, Warhol was a pioneer of all that.

Even with a broad appeal exhibit like this is, it will be a challenge for MAG to recover from the economic consequences of the coronavirus. Thanks to Binstock and MAG outreach programs, a broad audience patronizes MAG. Still, white women older than 55 constitute the core of MAG’s patrons.

“That’s the classic demographic not only in Rochester but across the country,” Binstock explained.

But they aren’t necessarily donors.

“An art museum functions like a retail organization. Visitors don’t cover it. We need philanthropic sources. That’s what we really rely on,” Binstock said.

Banks lending their collections to museums, foundations and granting agencies help art museums, too. Unfortunately, however, Binstock said there is going to be a lot more financial burden to bear before things get better.

MAG and other art museums have had to trim their budgets, cut salaries, implement furloughs and take unwanted measures to survive.

“It’s going to take quite awhile for people to return in the way they did before,” Binstock said.

And that’s a shame given the essential value it provides the community.

As Binstock explained, the entire art museum industry is working hard to change and appeal to a broader audience. More niche shows are planned including those with a Jewish theme, Indian theme and LGBT theme.

“We want to do something for everyone and for everybody to find MAG relevant, “Binstock said.

So, come take a look at all of the ways Warhol influenced American life. You can see all the other magnificent artists’ work on MAG’s floors, too. There’s no touching, of course. Tickets are timed to control crowds.

A famous Warhol print of Marilyn Monroe is there to greet you, looking as radiant and beautiful as ever.