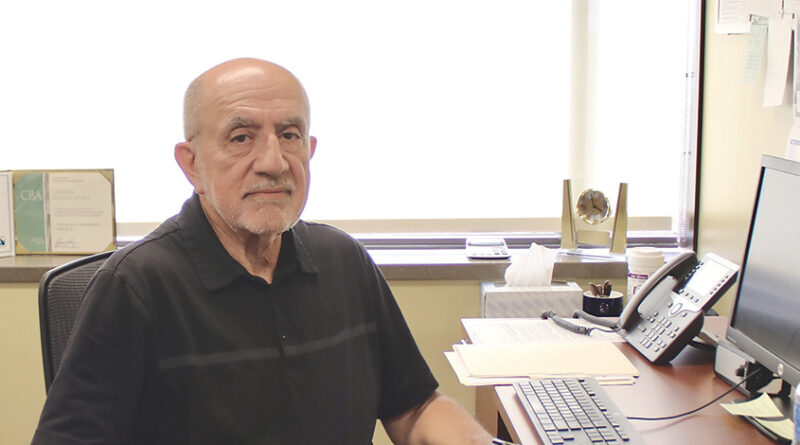 Many of us know the feeling. It comes to you on your last day of work. You’re retiring and saying good-bye.

You’ve made some plans to be busy for the next few weeks, at least. Home projects. Golfing. A quilt. Some travel. Visiting family. Attacking that pile of books in the corner of the bedroom. Binge-watching every Star Trek episode since “The Menagerie.” Volunteering at church or in a civic organization. Running for public office.

But there’s a moment when an unsettled feeling rests on your shoulders that first night.

“After all those fun things I’ve been putting off—then what?” you ask yourself.

If you’re particularly restless, gifted, dedicated or competitive, your retirement may be rocky. The image in the mirror you check looks less and less like you every day.

For many of us, the temptation to go back to work eventually pops up.

Why not? You’re an accomplished person with senior-level skills in whatever it is that you did for so many years. You have great work habits. You have old-fashioned values that are disappearing today. You’re valuable. And you’re also of a certain age.

But you may think you’re ready for the next adventure in life.

Maybe you are. But let’s get some perspective from a guy who knows a little about starting a business, no matter how old you are.

Sam Campanella, 73, of Greece, was retired. Then he got back to work. Now he may retire again.

He is a certified business adviser for the state Small Business Development Center at the University at Brockport, with offices in Rochester. He helps people write business plans and gain experience and expertise.

A St. John Fisher grad, he worked in the electronics industry for 15 years right out of school.

“I worked my way up from purchasing agent to senior vice president,” he said.

He then worked at a conveyor manufacturing company in Honeoye for a few years.

Meanwhile, he got some businesses of his own started on the side.

When he graduated from college in 1971, he owned an Italian deli.

“I had that a couple of years, but then I got really busy in my [day] job,” he said. “It was tough on my wife, who was pregnant with our third child. So, I sold the business to the DiBella family.”

Then, he owned a chain of four women’ fitness centers for a few years, he added.

“I owned Snuggles Corner, a little bar parked on a corner right between Kodak and Rochester Products. It was a business bar. People would come in for lunch and after work for a beer and wings,” he said.

Campanella next bought Henner’s, the oldest liquor store in Rochester. It had opened right after prohibition. He had a space next door and turned that into Mail Stop. “We did everything the UPS Store does today, but it was my own concept. The liquor store did so well I eventually had to move it into the Mail Stop space,” he said.

He sold the liquor store to a partner and joined with another businessman to form Genesee Financial Corp. in 1998. They funded cash-starved businesses by taking over accounts receivables.

“I also had my notary license since my last year of college,” he explained.

In 1999, he had started working with banks to notarize the paperwork for loan closings.

“People could now go online and apply for a mortgage or refinance their house. The bank didn’t have to be right in Rochester; it could be Wells Fargo in California. These banks needed someone in the local area to do closings. So, if you had a notary public license, you could notarize the mortgage and the note and all the documents that needed to be notarized,” he said. “They had a course online to become a notary signing agent. I took the course and started sending emails out to banks, saying, ‘Hey, I’m in the Monroe County area and able to do closings.’”

“I did that for 12 years. I had helped some of my accounts receivables clients by writing business plans for them. I discovered the SBDC and contacted them to refer a few clients there,” he said. “One day I saw in the newspaper that SBDC was looking for help. I had gotten my real estate license and was selling real estate. I said, ‘I’ve still got time on my hands,’ so I went to work for SBDC in 2009.”

In 2019, the SBDC staff was really stretched because of COVID-19.

“We were really busy trying to help all these people who were coming to us,” Campanella said. “Our clients were losing staff, losing money and we were just jamming them in, trying to help.”

The following spring, Campanella was seriously hurt in a car accident.

“I think I must have been knocked out for a few seconds because when I came to, my ears were ringing real loud, and it’s like, ‘Where am I?’ Then I realized I’d just gotten hit. They took me to the hospital. I had herniated four discs in my back.

“My brain got foggy for a while. For the next three-four weeks I’m trying to work with clients and all the issues they’re having and things weren’t clicking. I thought, ‘Maybe it’s time. I’m 70 years old, maybe it’s time to pack it all in.’ So, I gave my notice and I left on the Fourth of July 2020.”

“Now retired, I was doing whatever: playing golf, working out at the gym quite a bit, exercising. Fortunately, my son, Russell, is a chiropractor and I was at his office every week working on my back,” he said. “I’m still getting treated for that. The pain has subsided, but it’s something I’ll live with forever.

“I retired because my brain didn’t feel like it was functioning well after that accident. I just went home and chilled out in the summer, went in the pool, played some golf, then winter came along and I said to myself, ‘What am I gonna do? I can’t just sit around.’”

In December 2021, the SBDC director retired after 30 years in the office.

“At his retirement party, he asked me, ‘Hey Sam, are you interested in working anymore? We’re kind of short-staffed. We lost a few people to COVID who didn’t come back,’ Campanella recalled. “I said, ‘I might consider it.’”

Two days later, the dean of the Brockport Business School called and asked Campanella to start right away — just before Christmas.

A year later, after working a shortened weekly schedule, Campanella isn’t sure if he’ll continue to work or not because he is going to be in Florida for four months every year with his second wife, Stella, who married him 27 years ago.

He can do the job remotely, but the SBDC will have to decide on that.

What was it like when he retired the first time?

“Then I would go and get an adjustment at the chiropractic office twice a week at my son’s office, which is right in a fitness center. I could still work out. I did the exercises, did weight-lifting and walking three days a week. If I wasn’t doing that, I was home doing house projects or reading a book. But you get tired of reading all day.”

“Not really. Stella is into the big 500- and 1,000-piece puzzles. Our big kitchen table became the puzzle headquarters. We now eat our dinners on TV trays. I helped with the puzzles,” he said. “I watch different news channels. I don’t like to watch a lot of TV because you get hooked and become a couch potato.

“I didn’t really know how I’d feel or what to expect in retirement. I had been a workaholic all my life. When I wasn’t working in my own business, I was working in industry and I was usually in a management position working 40-60 hours a week. That was pretty much my life, other than going home and having fun with the kids. I gave up golf and a lot of other activities and hardly took vacations.

“Having four kids and putting them through school, you don’t have a chance to save the money you’d like to save for retirement. That’s why I stayed longer working in the first place: it was not only the love of work but to build up retirement funds as well.”

Thinking about unretiring? Campanella has some advice, based on what he has done with clients.

“I’d sit down and talk with them,” he said. ”I’d hear what their background is about, what their life interests are outside of work, their hobbies, sports activities. Then I’d ask, ‘What is it throughout your career where you always would say, ‘I wish I could try doing this and see if it that was something that could be created into a business?’

“If someone came in totally lost on what to do, I would consider referring them to a franchise company that offers multiple franchises and have them take a look at that. Even if they didn’t buy a franchise, it might give them an idea of something that might sound interesting. You can start a franchise for as little as $5,000 or go up as high as $250,000, unless you go into something like a McDonald’s or Wendy’s, where you have to have $1 million of net worth.”

You’re talking a million just for the franchise. There are a lot of franchise opportunities for less than $50,000.

“I talk about family right up front with everybody,” he said. “I ask, ‘Do you realize how much time it takes to get a business started and keep it running? How does your spouse feel about this? Is he or she going to support it?’”

He also asks if the spouse will peacefully handle family responsibilities while you’re trying to start your business.

For senior citizens who visit the SBDC for advice, Campanella asks, “What’s your family situation now? Are you spending more time with your wife? Is she saying, ‘Get out of my hair and go do something?’ Or is she saying, ‘Let’s find something we can do together?’”

“Many times that guy coming in here who has worked in industry his whole life, who was a vice president of sales or manufacturing, now he just wants to do something simple, like a little print shop where he and his wife can both work there. There are all kinds of different things that are out there,” Campanella said. “I suggest you get family support and if at all possible, get them involved in the business. Beyond that, I think it’s a personal thing. We’re business advisers.”

Should SBDC decide to let Campanella go, Stella has already gotten a promise from Sam: “I crossed my heart and hoped to spit,” he said. “I told my wife, ‘No more businesses.’”