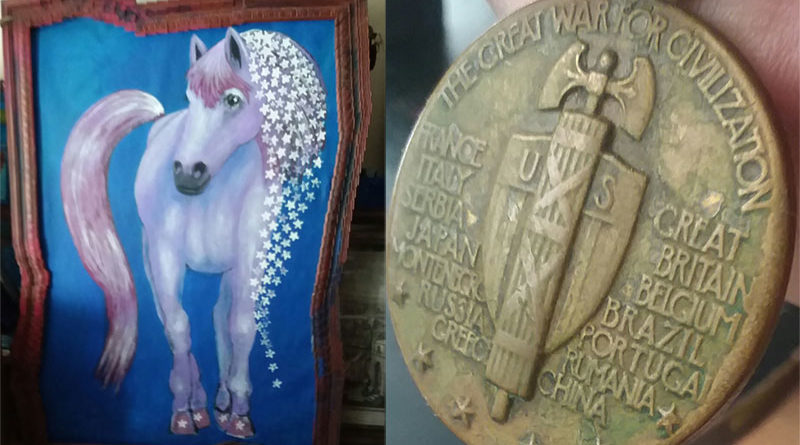 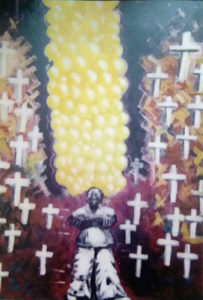 Honeoye Falls is an idyllic inspirational place for artists like William Page.

“It gives me a relaxing environment. It’s a very comforting visual place to be,” he says. His art, however, isn’t about an idyllic setting by the downtown waterfall.

It’s not fun art. It’s art about emotion and the human condition.

It’s art about “the great war for civilization,” which was, of course, a description given to World War I.

It was on his grandfather’s WWI service medal and it’s a description that still applies to the world today, Page says.

“In my humble opinion, we’re still an angry society all over the world today. We are our own biggest problem,” he says. “People are still in conflict, still determined to destroy each other.”

To depict that tragic aspect of life in art, he paints bones, frequently dinosaur bones, as a symbolic representation of the conflicts of life.

His work is bigger than a typical wall or gallery hanging. An 8-by-10 foot painting could take up most of a wall. There’s a distinction between communicable art and decorative art, Page says. His art is firmly in the former category.

To describe what he does, Page uses the analogy of a prehistoric cave man depicting what he sees happening in the world through large cave wall paintings.

“A lot of art isn’t understood. I use dinosaur bones and human beings to signify the psychosis humanity goes through,” he says. “What’s happening in society and trouble in society is what generates my paintings.”

It sets Page apart since it’s not a common theme among American artists.

It’s art that may be more suited to European tastes than ours, he says, noting that art exhibits in Europe are based on how society feels.

That’s not necessarily true of exhibits and galleries in the United States. Page said museums are better suited to his kind of artistic expression and typically have more display room.

Acrylic painting is his medium. “I use it because it dries fast,” he explains. “I paint from emotion. I need to keep a flow,” the artist says. Acrylic is good for that and for quickly correcting mistakes, too.

‘Part of a big swirl’

Dinosaur bones aren’t the only things you’ll see in Page’s paintings, however. There are people, galaxies and horses. There’s even a piece called the “Star Mane Healing Horse.”

Page, 69, says it was a third grade grammar school teacher in Buffalo who first got him interested in art and encouraged him to develop his talent. He’s been using symbolic representations to depict the conflicts of human beings ever since.

He grew up and went to school in Buffalo before moving to New York, where he managed an art gallery in Soho, a neighborhood in lower Manhattan. He managed there for 10 years in addition to pursuing a career in advertising and public relations.

A major piece in his portfolio of work is a portrait of the World Trade Towers as seen from his studio window in Jersey City before the 9-11 attack.

Like many area baby boomers, he returned to Upstate New York to care for an elderly parent and cherished the time he got to spend with her in her last years.

Today’s turbulent times — with nationwide “Black Lives Matter” protests happening in Rochester and across the country in addition to the COVID-19 pandemic — are ripe for an artist’s interpretation and concern. It’s likely to show up on the artist’s canvas. A finished painting of a crucified dresser is symbolic of elderly nursing home residents’ plight in the pandemic.

Primal therapy is an impetus for his work. “Primal therapy takes deep troubling emotions and exhumes them. You become aware of where hurt comes from. It takes these feelings out of your system so it doesn’t impact your life,” he says

A part of the value of art isn’t presenting it to others as much as using it to understand yourself, he explains. Page has done that through challenging times that included service time in the Marine Corps, which opened his eyes to world conflicts then and now.

Honeoye Falls and the Mill Art Center and Gallery is a good place for that, Page notes. To expand on that, Page says he wants the town hall to utilize some of its free space to display the work of area artists.

Samples of Page’s work can be found on his Facebook page at Facebook.com/William.Page.376