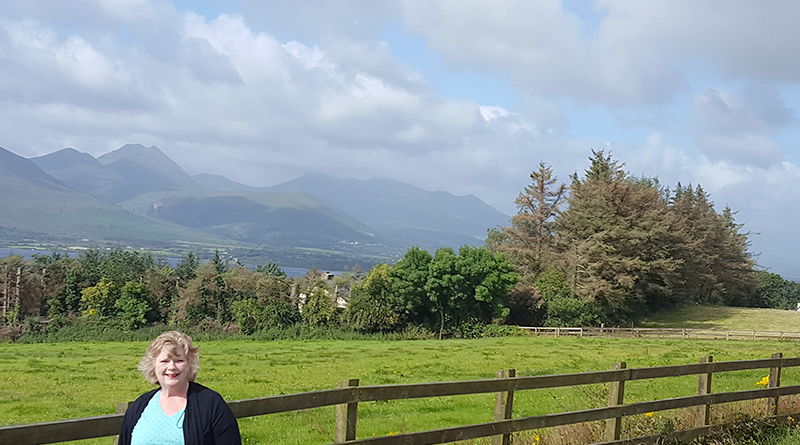 Caroline Povero, 65, of Victor likes to wander the beaches of Cape Cod thinking and taking in the beauty of the ocean.

One day in November of 2014, she found something in the sand that changed her life. It was a little rock painted with the affirmation, “Now I’ll do what’s best for me.”

She knew this message was meant for her. She knew it meant that it was time to see the world.

Povero, a retired Ontario County confidential secretary to the district attorney, didn’t embark on her first international trip until 2001 when she accompanied her daughter on her senior trip to Italy and Switzerland. Before then, she hadn’t done much traveling at all. There never seemed to be the time and her husband didn’t have the desire to travel. So when the chance to go with her daughter came up, she took it.

She caught the travel bug after that and in 2002 she returned to Italy, this time alone. Next was her 2005 trip to Spain then a 2013 trip to Paris with EF Go Ahead Tours, the same company that coordinated the 2001 trip she took with her daughter.

In 2015, she helped EF Go Ahead Tours coordinate another tour to Paris. She’s been travelling with and coordinating trips for EF Go Ahead Tours ever since. In addition to visiting Paris, Spain and Italy she has also been to Budapest, Hungary and Ireland and is coordinating an October trip to the Albuquerque Balloon Fest and several national parks.

Povero enjoyed traveling alone, but chose to do it in the safety of an organized group. When she travels with EF Go Ahead Tours, she knows all the details will be taken care of and there will be people around if she is seeking company. It also allows her the space to be independent.

“To try and plan something on your own is kind of daunting,” she said.

Katie Graham, EF Go Ahead Tours’ communications director, agreed that going solo on an international trip is a great idea but doing it with a tour can help alleviate the stress and worry of solo travel.

“We truly see that first-time travelers feel more confident and empowered by traveling with a group even before taking off. There are no worries about logistics, such as flights, hotels, and transfers, which eliminates an enormous amount of unease,” said Graham.

Povero also enjoys the pacing of EF Go Ahead Tours. The tours she attended and coordinated stayed in one city for a week at a time rather than moving every day.

“With some companies, you are staying a different place every night. That gets to be exhausting and that’s not for me,” she said.

“Once I started traveling solo on these trips, folks kept saying, ‘Oh, I could never do that; I don’t want to travel alone,’” she said.

That’s when Poverto realized there was a need to help other would-be solo travelers have the confidence to just go for it within the safety of a group.

Yes, escorted bus tours are not for everyone, but they do fill a void. It’s perfect for some people; you’re independent, yet have the safety and security of a dedicated tour director, all the details of transportation, hotels, and some meals are all included in the price, Poverto noted.

She helps EF Go Ahead Tours find travelers for tours and helps everyone get ready for their big trip. She organizes meetings so travelers can meet each other beforehand and get answers to their questions about the itinerary.

She also plans a post-trip reunion so travelers can reminisce and share photos.

Many people who go it alone almost always meet new friends when traveling. When Povero travelled to Paris in 2016 for a few days before meeting up with her group in Florence, Italy, she randomly met some fellow Americans.

They ended up spending the next day together and are still friends now. “You don’t know who you are going to meet and the experiences you will have,” Povero remarked.

Travelers tell Graham all the time about the new people they meet and how important these encounters are to them. “We hear time and time again that friendships made on tour continue long after returning home, and we even see travelers going on their next tour with friends they met on their previous trip,” she said.

But friendships aren’t the only benefits a person can gain from traveling alone. Solo travel can also reveal a person’s hidden strengths.

Dawn Oryszak, 63, of Fairport learned a lot about herself when she started traveling on her own about 20 years ago.

“I had decided that I was getting to an age where I didn’t want to wait for everybody to decide they were going to do it with me. It was a matter of deciding that life was too short and I was going to go ahead and set out on my own,” she said.

During the trip to Paris with Povero in 2015, she not only overcame her fear of flying, she also found out that she is capable of much more independence than she previously thought.

One day, the group took a trip to Versailles, France but she decided to stay behind. She sat in her hotel room feeling lonely and bored, so she willed herself to just go out into the Paris streets and explore.

She went to cafes and shops and an old Parisian cemetery. She strolled around the busy city, meeting new people and seeing things she would have missed had she gone to Versailles that day.

“I learned so much more about the people, about Paris, and about the feeling of the place than I did on everything else we did. I learned so much about how strong I am,” she said. “I faced the fear and found the joy in it. If you look for the joy you will find it. When you face that fear and realize how short life is, you give yourself a chance to explore.”

Jane Adams, 66, of Irondequoit always wanted to see the world with her husband when they retired. Sadly, he passed away when she was only 49, before they could embark on the extensive travel they dreamed of.

In 2007, she and another friend decided to plan a trip to Arizona. It was a wonderful experience and since then, she has been all over the world including Portugal, Spain, Ecuador, and Peru. She’s joining Povero for her October national parks tour as well. She didn’t let a few nerves hold her back.

“It may seem a bit scary at first, but I never backed away from a challenge and the desire to travel pushed me to go on these trips. I found that it is a wonderful way to travel and make new friends along the way. There are many more trips in my future, and places I am longing to see,” Adams said.

Oryszak, Adams, and Povero all overcame their initial apprehension about traveling alone by recognizing what their fears were and facing them head on.

Fear of being alone, not knowing the language, and fear of flying are all very common stumbling blocks for people who want to travel alone. But Povero knows that letting a taste for adventure lead the way can help you let go of a need to control and help you let go of fear.

Povero said her desire to see, explore, and experience things was greater than her fears and apprehensions.

Povero pondered what her favorite trip has been so far and couldn’t pick just one destination experience.

“It’s like asking a parent if they have a favorite child. Each is special in his or her own way, and each carries great memories and experiences,” she said.