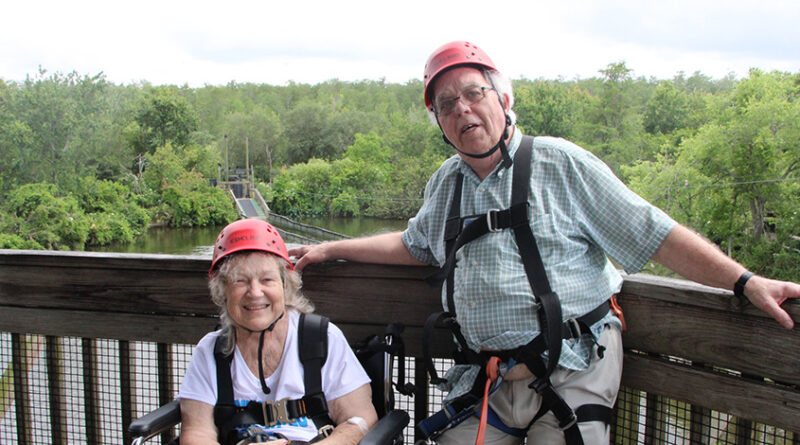 To celebrate her 80th birthday, she took a zipline ride
over a lake filled with alligators in Florida

Bonnie Harris decided she was going to take the plunge.

She was going to fulfill something she’d dreamed about since she was a kid; something that was now part of her bucket list.

Her daughter-in-law did the research and made all the arrangements.

Bonnie was going to go zip-lining.

She would be suspended on a wire and roll over a ravine and small lake, in Florida.

To make things more interesting, her daughter-in-law picked Gatorland as the site where the lake below the zip line was full of alligators looking for a snack from above.

“Growing up, I always wanted to go zip-lining,” said Bonnie. “But time went by. I graduated from college, got married, had a son, and so I put my zip-lining dream on the back burner. I have multiple sclerosis and am now confined to a wheelchair. However, I never gave up hope that one day I would check this off my bucket list. Little would I know that the year I turned 80 would be my year.”

Carefully strapped into a harness and frame made for the handicapped, Bonnie got sent off the parapet and zoomed down toward the water where, sure enough, there were reptilian eyes protruding from the water hoping for an accident and a happy brunch.

“It sure was incredible. I highly recommend that thrilling experience to anyone who has wanted to go zip-lining,” she said.

Bonnie and her husband Howard live on a 25-acre portion of what was once a 100-acre hilltop farm in Springwater, with a view of Canadice Lake. On many mornings, they can watch the deer chase the turkeys, and vice versa, from their bedroom. 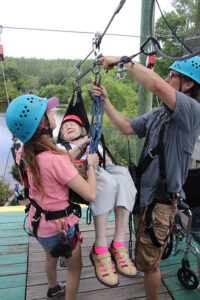 She taught in Greece and Spencerport elementary schools, walking away from the classroom when diabetes claimed her sight in one eye. Bonnie and Howard built the first portion of their house in 1997. Soon after that, she was diagnosed with multiple sclerosis and the plans Howard had for the house had to be changed.

“The house wasn’t as functional for us now,” he explained.

So they made plans to change it.

“Handicapped houses are hard to find,” he said.

“And as soon as they’re on the market, they’re gone,” added Bonnie.

“The whole house is flat,” said Howard. “We also have an oversized garage to accommodate getting her out of the car.”

“Our house just kind of grew,” Bonnie explained. It ended up being completed in three sections.

The couple moved in during February of 1999.

“And we had a 40-inch snowfall,” Howard said. “Nobody went anywhere.”

Howard was a computer tech for Honeywell in Rochester for 24 years, then worked at Wilmac as a technician. He retired at 57 to take care of Bonnie. They had met at a ski club. For both, this is their second marriage and it’s lasted 30 years.

“I’ve had a bucket list for a long time,” Bonnie said. “The doctor told me I couldn’t skydive and I should try some quiet stuff, like walks in the woods. We like to travel around here, but we’ve also been to the national parks in Utah, and we’ve been to Alaska, Hawaii and Ireland — I saw my grandmother’s house in Ireland.”

She said she loves to read, but can’t anymore. “I can’t write anymore, either. I find other ways to do things,” she said.

On the trip to Florida, the zip-line deal almost didn’t happen.

“I got the flu,” Bonnie explained. “I spent the night in the hospital. I’m thinking, ‘We spent all this money, all this time,’ and I said to myself, ‘We are going on this zip-line.’”

The next day, Bonnie and Howard looked like they were going sky-diving with the harnesses and hardware Gatorland fitted on them.

“They strap you in like you are skydiving,” she said.

Bonnie went across the pond in a mummy-like position and she could see the eyes of the alligators poking out of the water. The arc of the trip carries zip-liners so close to the water that Gatorland has raised fencing in the middle to prevent gators from trying humpback whale vaults out of the water to snag a human snack as it glides by.

Howard and Bonnie crossed the water flawlessly, but Bonnie had the most fun.

And the adventure wasn’t done.

On the plane ride back to Rochester the next day, their plane pulled out of the gate, then pulled back in again, and police got on to remove some passengers.

“When we got to Rochester, sheriff’s deputies got on the plane and took off a couple more people,” Howard explained. “We had excitement the whole trip.”

The Harrises stay active. They’re in a hiking club.

“Howard was elected president of the club the day he was getting a colostomy,” Bonnie said. That’s what happens when you miss a meeting.”

“I was walking when we got here,” she said. When she couldn’t continue doing that, people in the club kept her involved by pushing her wheelchair part-way on the trails.

Bonnie said becoming 80 kind of snuck up on her.

“Do as much as you can for as long as you can. I never did as much travel until I met him,” she said, thumbing in Howard’s direction.

She has been a member of the Wayland Library Exercise Group that meets twice a week. The pandemic curtailed a lot of that.

Bonnie missed the social interaction. “You could learn everything that was going on in the village,” she said. “I keep in touch with a lot of people from the ski club we belonged to.”

“Even though she couldn’t ski, we still did a lot of things with them, including a trip to the Adirondacks every year,” Howard said.

“I’m very active in a retired teachers’ group from Spencerport. We meet every month, so you keep track of people and what’s going on” Bonnie said.

“Teaching was very good to me, very good.”

Decisions lie ahead for Bonnie and Howard. He’s the pragmatist. “We’ve looked at assisted living arrangements,” he admitted. “One day we’re going to wake up and realize we can’t do this anymore.”

Bonnie is the optimist. “The question is, ‘What do I do for my next birthday?’ Parachuting? Hot-air balloon?’” she said.