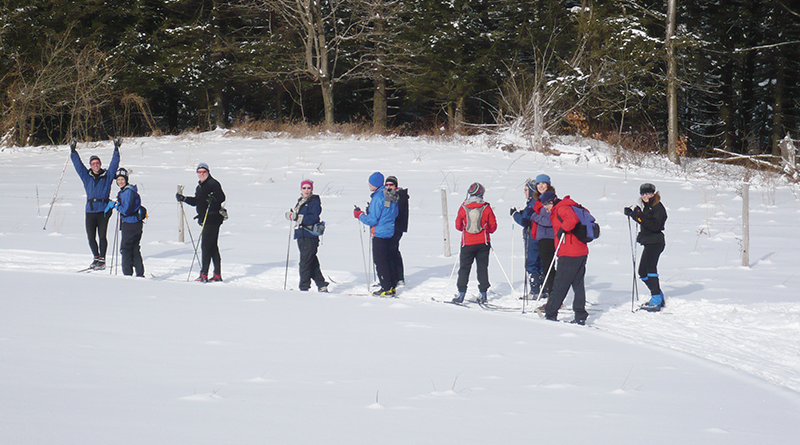 For members of the Huggers Ski Club, age is but a number

Trudy Munding described the joys of cross-country skiing as she applied a coat of wax to her skis.

“It’s so beautiful in the snow, just to be outside, the 72-year-old said.

Munding is just one of the Huggers Ski Club’s 300-plus members. Formed over 40 years ago, the Rochester-area organization attracts the kinds of folks who love the outdoors. Though its members often gather to enjoy cross-country and downhill skiing, snowshoeing and other winter sports, they can also be found hiking outdoor trails, bicycling, kayaking or participating in other activities year-round. When not savoring the pleasures of the outdoors, they might come together for club-organized events like the disco party scheduled for this January. Age is but a number.

Huggers members regularly organize recreational trips in locations around New York state, but can also hold them in the Rochester area—Monroe County alone offers more than 20 parks. You can hike, cross-country ski, canoe and participate in a host of other outdoor activities, often within 20 minutes of home.

In November, about 25 Huggers members came to the Roberts Cabin in Henrietta’s Veterans Memorial Park for the club’s cross-country ski party and waxing clinic. John Jaenike took a few minutes away from preparing his skis to talk about the instruction he received in skiing as a teenager attending school in Pittsford.

“I was on the ski team in high school, where you did downhill and cross-country,” the 67-year-old said.

Though Jaenike enjoys lots of winter activities, the cross-country trails at Mendon Ponds Park are a particular source of delight.

“It’s very peaceful,” he said. “You’re away from the traffic and the noise and all of the [computer] screens.”

Bruce Pollock’s children helped put him on skis. Though he already knew how to ice skate, he decided to learn downhill skiing with his three kids.

“I started taking them skiing when I was about 35,” the Pittsford resident said. “The two boys became really good skiers, and we enjoyed doing that.”

From their Connecticut home, they traveled to Vermont to ski—Stratton Mountain was a favorite place to visit. Though Pollock’s kids are now full-grown, the 63-year-old still heads out to enjoy the outdoors, though he prefers biking in warmer weather to schussing through the snow.

Those hoping to learn how to ski — particularly to downhill ski — should know that falling down is a big part of the experience, at least in the beginning. Just ask Dan Haas. The 67-year-old still remembers being on the beginner’s slope at Hunt Hollow, in Naples, NY. Beginners’ bindings are intentionally loose.

“The first half-hour was just trying to get the skis to stay on the boots,” the Webster resident said. “I really wanted to downhill ski.”

Since then, Haas has taken to the slopes in exotic locations, including the Swiss, French and Italian alps. During snowy weather, he heads out to downhill or cross-country ski at least twice a week, often with his wife.

“What I like best is when you’re skiing in deep snow,” Haas explained. “It’s like a floating feeling.”

When Alice Pidgeon found herself less able to enjoy downhill skiing, the 67-year-old turned to another winter sport: snowshoeing.

“It isn’t as technique-oriented as downhill or cross-country,” the Brighton resident said. “If you can walk, you can snowshoe.”

There are other plusses to donning snowshoes, as well.

“When you are in the woods, you can stop, look around, enjoy the beauty of the forest with the animals and the birds,” Pidgeon said. “The other thing is you are really getting an aerobic workout.”

“There’s no such thing as bad weather — only inappropriate clothing,” the great-grandmother said.

In addition to skiing, Munding also dons her winter clothing to hike and sled. Each winter, she, her family and their friends walk from Munding’s home in Sea Breeze to Durand Eastman Park to hold an outdoor picnic. As many as 30 folks show up for the do.

“We make two fires — one for cooking and one for warmth,” Munding said, with a grin.

Though Huggers members don’t seem to let advancing years stop them from enjoying themselves, Sanguinito said the club hopes to entice younger folks to share the joys of outdoor sports and indoor camaraderie that it can provide.

Those hoping to try winter sports need not buy the equipment needed right off the bat. At least one outdoor sports chain rents skis, snowshoes and snowboards, according to its website. In addition, Henrietta’s Tinker Nature Park rents out snowshoes and cross country skis for use on its trails, weather permitting.

More about the Huggers Ski Club in Rochester

For more information on the club or its activities, go to: http://huggersskiclub.org.

For more information about Monroe County’s parks, go to: http://www2.monroecounty.gov/parks.