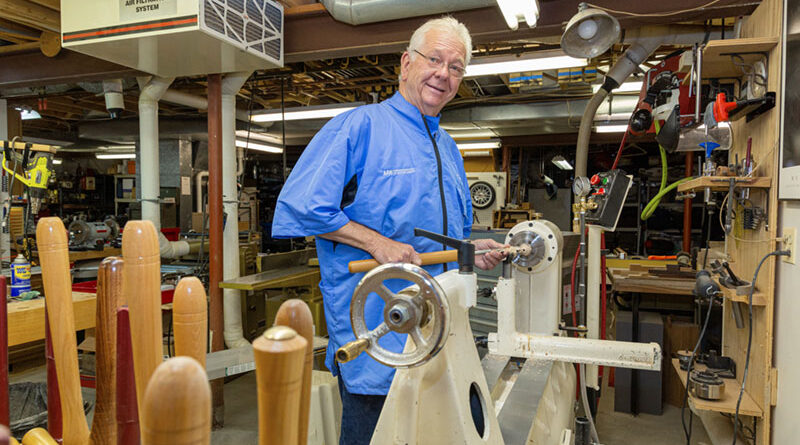 Many artists create music that fascinates the ear.

Only a few create music that fascinates the eye and heart as well.

Musician and master woodturner Bruce Trojan is one such artist.

Now retired, Trojan has turned his passion for musical expression and creativity into crafting unique wood, metal and plastic sculptures that all but stand up and sing.

“Along the way, I learned the delights, challenges and importance of creating,” said Trojan from his sprawling, generously equipped home workshop. Specialty tools, chisels, electric saws, planers, jointers and lathes surround him.

“I carry these lessons into my woodworking,” he said.

Trojan’s creative spirit was stoked early on as a child.

“I was always on the job site with my dad who built three houses by hand,” he said. “In my tweens I made my own skateboard, and when my dad came home and saw it he was so proud of me.”

Trojan’s appetite for woodturning was solidified in his late 40s when his wife bought him a lathe. And over the past three decades, he’s designed, honed and perfected more than 50 wall-mounted and tabletop sculptures that depict music and creativity, along with utilitarian objets d’art, bowls, ornaments, vessels, tables and cabinets.

Each one begs to be touched, studied and enjoyed.

Trojan said he spends an average of three to five months on his more complex projects. Sometimes much longer.

“I can’t just do it simply,” he said. “I always have to experiment and add things. For this last flower I did, I made one small piece for it five or six times until it was right.”

How does Trojan fine tune the designs for his creations? By sketching them on an iPad, because “you can keep changing it around and mess around with color,” he said.

“Creating a piece is like a form of improvisation,” he said. “And wood has a mind of its own. It doesn’t always cooperate and you have to change your idea or try a different piece of wood. Sometimes you just look at it and it speaks to you and tells you to go in a different direction than you thought.”

Among Trojan’s creations are a series of wall mounted abstract guitar sculptures. The first, titled “If Pablo Met Jimmy,” blends the visual and musical styles of Pablo Picasso and Jimmy Hendrix, respectively. After it was damaged, Trojan designed another iteration in a similar style called “Badda Bubinga.”

An intricate and award-winning piece called “Polyrhythm” was the result of an 18-person collaboration and is made of various woods, metals and plastics. Trojan designed it and acted as project manager, investing four or five months of daily work to put together. It depicts various orchestral instruments combining in harmony and includes work from an assortment of local craftsmen in the Finger Lakes Woodturners Association.

In any case, woodturners — and any master craftsperson — will need to temper their creativity and imagination with perseverance, perfectionism and patience, Trojan said.

“I’ve made up my mind to be a productive man who has a positive attitude toward life,” said Trojan. “I want to find peace, joy, happiness and love each day.”

To help him achieve those goals, Trojan said he’s moved almost entirely away from watching television.

“If you’re a TV watcher, get away from the TV,” he said. “If you can yourself get away, you’ll find there are many, many things you can be interested in and do and get excited about. Make an oath to yourself and do something!”

Two musicians have been very instrumental in leading Trojan toward creativity, he said. One was conductor, arranger and jazz trumpeter Jeff Tyzik. The other was jazz trumpeter, bandleader and composer Miles Davis.

“Jeff and I were at Eastman as students together,” said Trojan. “We played in a rock and roll band in Buffalo and I remember all those trips back and forth, we talked about being creative and original. Now that I’m doing the visual thing I’m understanding how satisfying it can be to my soul and psyche just to be creating.”

Miles Davis was an innovator who kept changing the direction of jazz throughout his career like no one else had, said Trojan.

“He heard music like nobody else, and he’d create it, he’d play it, he’d write it,” said Trojan. “So I put a picture of him over my lathe because I do spend a lot of time there. And it helps remind me not to take shortcuts, to do it the right way — the way I want to do it. And if it isn’t right, to do it again. That satisfies the soul.”

Trojan said it’s essentially a “spiritual experience” to search deep into his thoughts “and manifest them as finely crafted works.”

“Creating is a spiritual time,” he said. “You’re reaching inside and learning about yourself and learning what you like and don’t like, what frustrates you. It can be difficult — it’s not easy for many people.”

But when the finished product finally emerges after months of work, there’s nothing like that long, satisfied exhale, he said.

“It gives me a tremendous feeling of accomplishment,” said Trojan. “It feeds my need to be a creative person.”

Trojan’s style has evolved over the years. These days he’s combining lathe-turned wood with flat woodwork and metal and plastic materials that are first painted and then formed into shapes. The colors and shapes bring a sense of movement to the composition of each piece, he said.

But it’s not the materials, nor is it the techniques that are central to Trojan.

It’s the unleashing of creativity.

“I am motivated by the process of creating beautiful pieces that bring a sense of feeling complete and totally alive,” he said. “My ultimate goal is to share the joy of this process with others.”

Trojan is a  member of the Finger Lakes Woodturners Association, a local chapter of the American Association of Woodturners, which boasts more than 350 chapters across the globe. FLWT members fuel one another’s growth and creativity by swapping skill tips, techniques and ideas. And by collaborating on projects like “Polyrhythm.” Trojan said he’s learned much of what he knows today through the friendship and mentorship of these colleagues.

“I’m most grateful for all the opportunities I’ve had in my whole life,” said Trojan. “Grateful I went to a great music school, that I married a lovely and talented woman, that I’ve had the opportunity to be a sideman in Rochester and play for so many stars and actually get to play in Carnegie Hall with Chuck Mangione. I’m grateful for the skills I’ve learned with wood. And grateful to have had loving parents and wonderful close friends. Mostly, grateful that I’m still here to enjoy it all.”