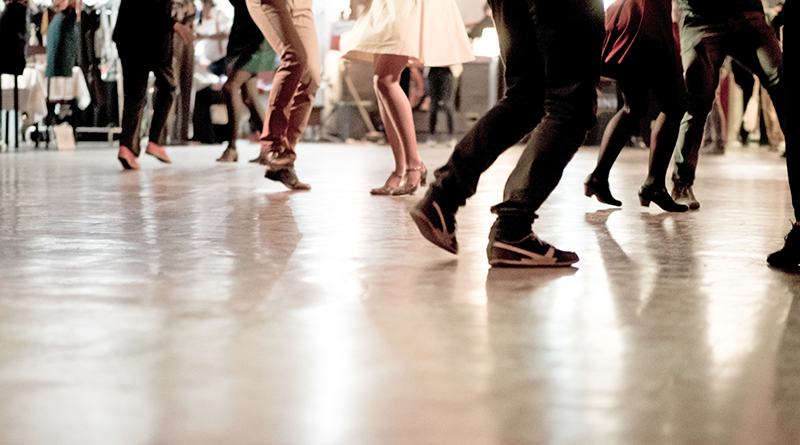 Everyone in the classroom of the Penfield Recreation Center on June 11 was looking at their feet.

“One and two, one and two…” called out ballroom dance instructor Michelle Madore as she taught a beginner group of students the east coast swing.

Some got the steps right away, but others needed a little extra time and instruction. But everyone, despite the 90 degree heat, was laughing and chatting merrily by the end of class and most stayed for the USA Dance Flower City Chapter monthly dance.

Many of the class attendees told 55 Plus that one of their favorite aspects of ballroom dancing is the sense of community. Indeed, many people on the dance floor that night greeted each other with big smiles and lots of hugs. These were people who had strong connections and enjoyed the time they spent together dancing and socializing. Lessons and social dances are great ways to find friends and establish community ties.

Ballroom dancing also helps strengthen the romantic bond between couples. Beth and Terry Kirkpatrick took dancing lessons with Jay Russet at Rochester Dance Lessons in preparation for their son’s wedding two and a half years ago. The wedding has come and gone and they continue both private and group lessons in order to maintain the connection they have with each other, and Beth said that, “learning new dances and their various steps together is a lot of fun.”

Their joy and affection was easy to see as they sweetly held hands both on and off the dance floor.

Good for Mind and Body

But dancing does more than enrich social and personal relationships. Studies have shown that ballroom dancing can significantly lower a person’s risk of age-related dementia.

In 2003 the Albert Einstein College of Medicine of Yeshiva University, New York, published an extensive study on aging and dementia. Published in the New England Journal of Medicine, the 21-year study revealed a significant correlation between ballroom dancing and a reduction in occurrence of age-related dementia. The 76 percent risk reduction associated with ballroom dancing was more than for any other hobby or physical activity including reading and doing crosswords, both of which believed to be excellent ways to decrease one’s risk of dementia. No other physical activity such as swimming or golfing showed such a positive outcome, according to the study.

The reasons for these are many and may be related to the decision making, mental planning and spatial awareness needed to participate in ballroom dancing. These skills stimulate the brain, which sharpens mental acuity thus reducing the risk of all forms of dementia.

Ballroom isn’t just a protective factor against memory loss and dementia, though; it’s also good for general fitness. The physical benefits include increased strength, flexibility and balance. It’s also a form of aerobic activity that can aid in maintaining or increasing overall physical well-being including cardiovascular health. Ballroom dance is usually a low impact exercise, so it is a great way for those recovering from illness or a hospital stay to keep in shape.

After Robert Nuttall underwent hip surgery his physician advised against some of the high-impact activities he used to love like running. But the doctor did give the thumbs up to continue ballroom dancing. Nuttall keeps in shape by frequent dancing and is an active participant in the Rochester dance community.

Ballroom dancing attracts students of all ages from very young children to adults in their retirement years.

Donna Gates of Rochester started dancing five years ago when she decided to take advantage of an offer for a free lesson. Today at 79 she practices many forms of ballroom but is partial to the Latin dances, including the cha-cha. Ballroom dancing has brought great joy to her life by increasing her fitness and enhancing her social life.

Others, like Ruth Hyde, have been dancing since grammar school. Now, at 88, she still enjoys everything ballroom has to offer, including stimulating community interaction and an enjoyable form of exercise. Hyde also participates in English country dancing as well as international folk dancing. She just returned from two weeks in Albania where she learned and participated in their native dances. She usually practices dance twice a day when she isn’t traveling and has recently rearranged her living room so that she has a wide, open space for home practice.

Suzanne Sabol and Jens Ingemann began dancing in 2000 after watching their 12-year-old son take dance lessons. Today they not only dance locally but they also compete all over the country. Sabol is the current president of the USA Dance Flower City Chapter in Rochester. The couple delights in traveling to competitions and meeting new people at the different events they attend around the nation.

Sabol, 69, noted that a person’s needs and desires don’t change much as they mature and that is why dancing holds appeal for all ages. She believes that ballroom dancing and her organization, USA Dance, can fulfill the universal “need for friendship and belonging, the need for creative endeavor and accomplishment, the need for music and body movement, the need for exercise and stress release.”

Music to Move to

Another draw for Hyde, Sabol and many others is the nostalgic music that accompanies several styles of ballroom dance. This upbeat big band era music adds another element of fun for students, particularly those who have fond memories of listening to it in past years.

To be sure, as soon as the music started that night at the Penfield Recreation center the event quickly went from “community event” to “party.” And if a dancer was taking a break they certainly were tapping their toes in time to the beat even if just watching from the sidelines.

While lessons and social dances usually use recorded music, occasionally a live band will play adding a further sense of festiveness to an event. Steve Link, a ballroom dance instructor who teaches classes at Weider Hall in Rochester’s South Wedge, also plays trombone in the Greece Jazz Band. Link said that ballroom gives him the chance to incorporate his two favorite things — dancing and music.

“When I dance, I feel the music. The dance becomes a visual expression of the music. And dancing with a partner lets me communicate that feeling and expression to her. I don’t know of many things that make me feel better than that.”

Looking for dance studios in Rochester?