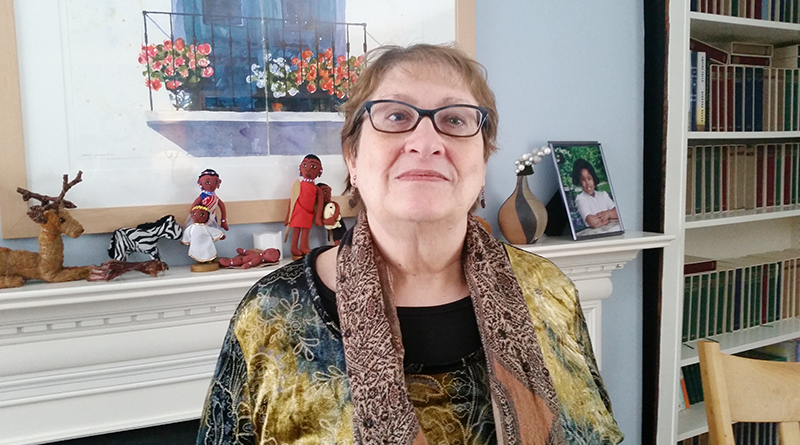 Through writing, poet expresses her feelings about tumultuous time in U.S. history

Well, it just might boast a cozy fireplace, a friendly dog and a sleepy cat, a bookshelf that opens onto a secret room, and a dining table piled high with books ready to be gifted to friends.

This is the Brighton home of author Denise Thompson-Slaughter. Thompson-Slaughter recently released her latest book, “Sixty-ish: Full Circle” (2017 Spirited Muse Press), a collection of poems about her youth in the 1960s and about how her life — and the world — has changed over the years.

Before the release of “Sixty-ish,” Thompson-Slaughter served as assistant editor of World Politics at Princeton University and more recently as managing editor of Reviews in American History at the University of Rochester. Thompson-Slaughter retired from Reviews in American History in July of 2017. She is widely published in literary journals, and she released her first book of poems, “Elemental” (Plain View Press) eight years ago.

She first found poetry when she was in high school and knew she’d become a writer when she spent math class quietly writing sonnets instead of focusing on calculations and formulas. After that, writing became a special pleasure in her life, and she has “always been someone who is very introspective, and I’ve always liked to write and found joy in it.”

When she became a mother, though, children needed her attention and time and long quiet writing sessions became a thing of the past. She soon discovered that keeping a pen and notebook tucked away in the bathroom allowed her to sneak off now and then to write a verse or two of poetry.

“The hardest thing about being a mother was not being able to finish a thought. Writing poetry forced me to boil down my thoughts and express them. That expression was the only thing that was really mine as opposed to my family. It was like keeping in touch with my own soul,” she said.

Thompson-Slaughter’s life in the 1960s and the changing socio-political landscape of America at that time heavily influenced the poems in part one of “Sixty-ish.” Several of these poems stemmed directly from the need to share her own personal experience of this pivotal time in history, particularly after reading some of the historical papers and books young historians were writing about the ‘60s during her time at Reviews in American History.

“They don’t have a clue of what it was really like,” she said. “Why don’t they ask us what it was like?”

So she put pen to paper and wrote 25 poems about her young life in 1960s America. Poems about feminism, first jobs, and Bob Dylan don’t just bring a bygone era to life for the reader, but present an intimate portrait of a young woman navigating a changing world.

At nineteen, after a day of work
as a Post Office Department secretary —
struggling with my conscience about being
a cog of government during a war I abhorred —
I’d ride the warm, overcrowded bus home,
nod off, or have seatmates nod off
and land on my shoulder
in that tin can of tired but compassionate sardines.

The second section of the collection offers beautiful and witty rhythmic poems, while part three touches on what Thompson-Slaughter refers to as “the difficulties and indignities of getting older and the indignities of these times.”

She touches on everything from retirement to knee surgery and takes a nostalgic and sometimes sad look at the past like in her poem,

“We were right: Love is all you need.
But we thought it was easy,
Never knowing
That on Earth, Love itself
Is near impossible.”

Sueann Wells is editor at Spirited Muse Press and had this to say about “Sixty-ish”:

“Denise’s collection was such an exciting read for me, even though I am a 30-something and her pieces speak to the 1960s and free love and drugs and politics and whatnot. Her collection seems absolutely applicable to the modern America. We seem to have come full-circle as a nation, and unfortunately are not learning from past mistakes.”

Now that Thompson-Slaughter is retired from her editing position, she is excited to tackle several writing projects as well as simply enjoy more personal freedom. When she is not writing poetry or fiction, she enjoys crafting, meditation, Sudoku and watching movies. All writers, of course, are also readers and retirement has given her more time to enjoy some of her favorite authors like J.K. Rowling and Janet Evanovich. Well-loved poets include Billy Collins, Mary Oliver, and Edna St. Vincent Millay.

Her next book, “Mystery Gift,” is a mystery novella set in a small Nova Scotia lobstering community. The book examines how people of different faiths can work together to solve problems, and how individuals sometimes have unique gifts that they don’t often appreciate. Spirited Muse Press has scheduled “Mystery Gift” for a summer 2018 release.