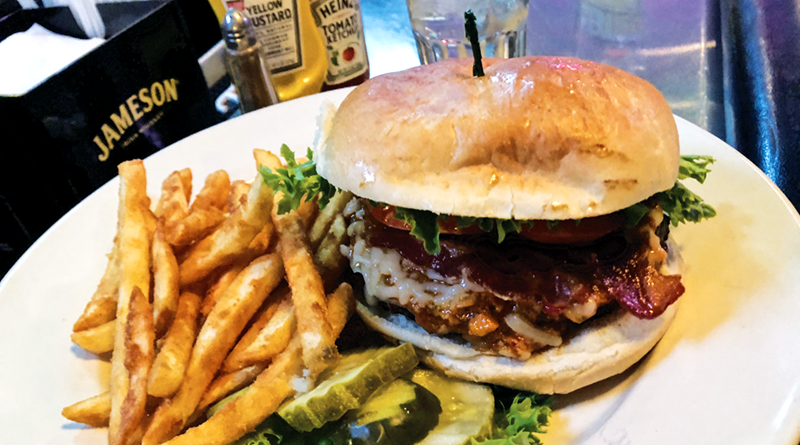 Eric’s Office Restaurant, located at 574 County Road 28 in Canandaigua, sets itself up for a few jokes and puns about going to the office. However, the business means business and the only paper they’re pushing are napkins, menus and bills at the end of the meal.

The restaurant dates back to the mid-1970s, but was purchased by current owner Eric Zimmerman in 1997. The two-room space is cozy and on the smaller side; however, patrons dining in aren’t eating on top of each other. There’s enough room to stretch arms, but tables are placed close enough to interact with others and eavesdrop on conversations.

Yes, kind of like a stereotypical office setting without the cubicles — thankfully.

Had we known Eric’s Office Restaurant was going to be as packed as it was, we would have requested a reservation. There was a 40-minute wait, but the turnover, as it turned out, was faster than anticipated. The host gave us the option of eating at the bar — so what the heck?

The bar is not the best spot to be an inconspicuous restaurant reviewer, but it offered a refreshing point of view. It was rewarding to change things up, especially since we sat near the bar-dining area window, where the servers pick up the beverages.

Food aside, the experience of sitting in that spot was satisfying. The interactions with many staffers was cordial and fun. The bartender did a great job of balancing her attention to bar-side patrons and getting the dining room orders up. The person we presumed to be the manager on duty even brought us popcorn from the popcorn maker; he was refilling the machine when we first went for some.

To make eating at the bar feasible, an inch-plus-thick block of wood is placed down. All dishes sat on top of them well.

The Scallops Alvaro ($12.95) and coffee chocolate tenderloin ($13.95) were two appetizers that stood out. We also got Naked Dove Brewing Company IPA and a porter ($5.25 each). The Canandaigua brewery’s grog was featured on several taps in the restaurant.

The scallops were a light starter. They were graced with light sear marks and served with great company — mushrooms, red peppers and artichoke hearts. The lemon and basil sauce was really flavorful and not overly salty. The feta cheese also added to the flavor of each bite.

The tenderloin dish was also notable. Three pieces of the beef surrounded by stacked potato cakes. The port wine sauce was really delicious, and it paired well with the very subtle hints of chocolate and coffee on the meat. Although the beef was slightly overcooked from our order of medium rare, the meat wasn’t fatty or chewy.

Eric’s Office Restaurant boasts an array of dishes: numerous burgers and sandwiches, various pub fare and formal entrees. We opted for the chipotle burger ($10.95) and the veal parmesan entrée ($20.95).

The burger was delightful and was cooked medium rare. It definitely had a little kick thanks to the chipotle pesto and jack cheese. Along with the standard lettuce and tomato, bacon is invited to the flavor party. The burger comes with really crispy fries and crunchy pickles. Overall, this was a solid plate.

The restaurant really loves their parmesan. Under the house favorites section, the thee variations of eggplant, chicken, and veal are listed. All three are topped with marinara and mozzarella, and, surprisingly, they are not served over pasta. The three generous pieces of veal were thin-sliced and tender. The breading added a great crispiness to it, and the slightly chunky sauce had good flavor.

To go along with the entrée, I opted for a potato. I’m not sure why I ordered that instead of a salad. It was a shoot-from-the-hip response. The spud definitely wasn’t my bud. It came out on the colder side, and the skin was a bit leathery.

Before tip, the bill came to $74.50. Aside from the potato, the meal was an enjoyable one. There wasn’t an overabundance of food, and the leftovers enjoyed the following day were minimal — one veal cutlet and some fries.

Eric’s Office Restaurant is a great spot to clock back into for good food and conversation. The atmosphere welcoming patrons of various ages is warm, and kudos again goes to the cordial staff.