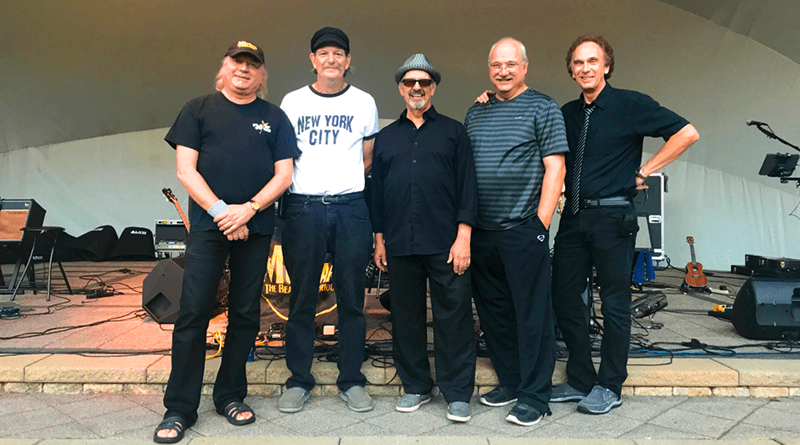 Rochester’s premier Beatles’ cover band, Mr. Mustard, is far from it. They want everyone to sing along and dance, if there’s room for it, at their appearances all across the Rochester to Penn Yan areas.

The nice thing about their enthusiastic audiences is they could be members of any generation: grandparents, their kids or the grandchildren.

Beatles’ music remains extremely popular with just about everybody. “It’s the classical music of the future like Bach and Beethoven,” drummer Mick George says.

Except for guitarist Sergei Antonoff, Mr. Mustard members are originally from East Rochester, where they grew up in the ‘60s and ‘70s admiring all the coolest guitars, drums and latest rock ‘n’ roll instruments at Properzia’s, a downtown East Rochester music store at the time.

Band members don’t know where Antonoff is from except he is from somewhere in Russia. If the band goes global, “Back in the USSR” is sure to be on the playlist.

The guys were persuaded to change their name from Get Back early on in their 10-year existence by a lawyer representing an Atlanta-based Beatles’ touring show with the same name.

Instead, a watering hole raffle to change the name was held in which Mr. Mustard was the winner. “It’s carried us well,” drummer Mick George says.

Want to see a likeness of the four lads from Liverpool that set young women’s hearts aflutter in the ‘60s?

Well, that’s not happening. “All five of us together have about enough hair to cover one Beatle,” says George.

Cosco says he’s not wearing a wig — just a hat. That’s the approach the nationally known Fab Faux takes, too.

On an acoustic level, however, you will hear Beatles’ song renditions the, um, lads — all of whom are in their 60s — have worked hard on to make them sound as authentic as possible.

Paul McCartney’s Hofner bass guitar, the Beatles’ signature sound, is always in play. Even the soundman, Jack Hamilton, does his best to orchestrate every little thing the Beatles did in recording.

George credits East Rochester High School music directors for bringing variety and contemporary music into the school program when he was growing up.

Three band members were in the singing youth group, Up With People. One way or another they all started playing Beatles’ songs long before they became Mr. Mustard.

For the most part, the lads taught themselves the instruments they saw at the music store and can play by ear.

Only George on drums and Antonoff on a Fender Telecaster play the same instrument continuously. Cosner, guitarist Tom Price and keyboardist George Botticelli mix in a lot of instruments besides the Hofner bass.

Price has plenty of guitars to choose from, including his favorites, a Smith custom 22 electric and a Taylor 810 acoustic. He contributes harmonica, ukulele and electric piano, too.

Today, they have over 150 of the Beatles’ 288 songs ready to play. They try to tailor the set list to the audience. Some songs are universally accepted; others like “Helter Skelter” might not always fit the atmosphere. They’ll play whatever the crowd wants to hear.

They’re not limited to the material the Beatles put out as a group either. There is substantial post-Beatles’ material to pick from even though John Lennon’s and George Harrison’s careers ended prematurely.

Between McCartney’s tour at age 77, the movie “Yesterday,” Cirque de Soleil and countless Beatles -themed shows of all kinds, fascination with “The Beatles” is still strong today, a fact that makes Mr. Mustard’s job a little easier.

The band is in its 10th year together, longer now than the Beatles were together themselves. Few local bands have that kind of longevity. Prime Time Funk is one they can think of.

The band members know they have a lot of competition with Beatles’ cover bands regionally and nationally, but it doesn’t bother them. Each band is a little different and makes its own unique contribution, George explains.

They’ve come a long way since taking faraway $40 gigs while in their 20s. Their wives and kids like the music and encourage them to take whatever gigs they want.

“I wish this would have happened in our 20s, but everything happens in its own time for a reason,” George says.

“We do get enough work now but we would definitely like to spread out to Syracuse and Buffalo,” Cosco says.

Working back-to-back gigs in different locales doesn’t slow the aging boomers at all. Botticelli often commutes from Cape Vincent in the Thousand Islands so he doesn’t miss a gig.

Summertime was busy, Cosco explains, and the band had to be sharp. Venues ranged from town amphitheaters to churches, taverns, fairs, restaurants, and municipal events.

There are lots of favorite venues of gigs played over a decade. Lovin’ Cup in Henrietta is one. The Penn Yan Courthouse and the Record Archive on Monroe Avenue, Rochester, are others.

It was years ago at The Old Toad on Alexander Street in Rochester that they realized from the fervor of the crowd that they had an opportunity to make the most of if they wanted.

The band enjoys getting together to perform with area school music groups that serve as fundraisers for the music departments that never seem to have enough money. Plus, Beatles’ music sparks something in these kids, Cosco explains.

“We get energized by them. Parents are used to going to school concerts to hear 1890’s folk songs. Now, their kid is playing Beatles’ music and it’s a thrill for them and us,” George says.

Things slow down in the winter without outdoor venues, which is when the band gets together to brainstorm and add to its repertoire. They still play indoor venues around town.

Read more about the band, what its playing and where at www.mrmustardmusic.com.

And suggest a song you’d like them to play, too, if it’s not on the playlist yet.