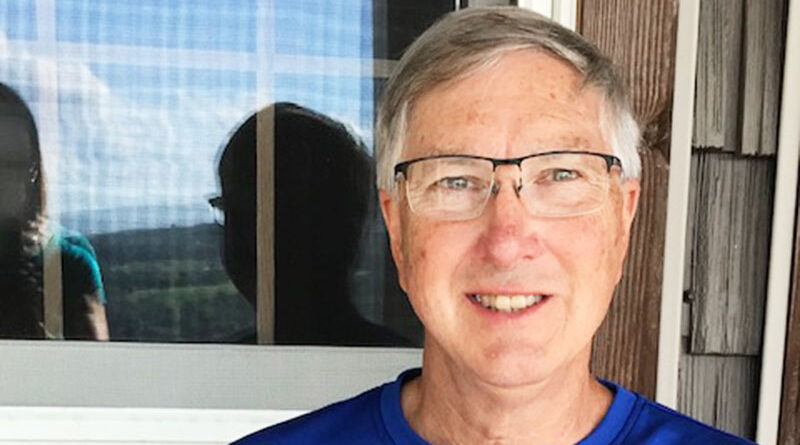 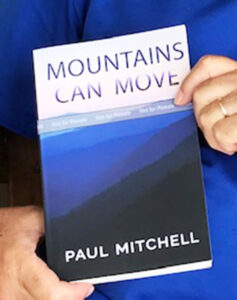 Retired nurse practitioner Paul Mitchell’s “second chapter” career is turning out to be quite a page-turner.

So is his first novel, “Mountains Can Move.”

The piece, two years in the making and set in the Finger Lakes region, weaves the complex tale of a father and son torn apart by a dark secret.

“I can’t say I have always wanted to be a writer,” said Mitchell. “I’m involved with the Middlesex Heritage Group and have contributed many historical essays to their newsletter over the years. But I never considered taking on a large project while I was still working.”

But as he edged closer to retirement, Mitchell knew he had to have a strategy for the transition. Since he already enjoyed writing and had demonstrated a fair amount of aptitude, he enrolled in a few writing classes at Empire State College.

“Over the three years prior to my retirement I completed a BA in writing,” said Mitchell. “This exposed me to many different kinds of writing and gave me a base knowledge of the story-making process.”

His aspirations included becoming a regular contributor to local and national publications, but success was limited and the process was less than rewarding, he said.

That’s when Mitchell turned to fiction.

“‘Mountains Can Move’ grew out of a character in a short story I had started for a writing course,” said Mitchell.

The book’s theme hit close to home for the retired nurse practitioner who’d started his own career as an aspiring photographer.

“It’s the story of a frustrated artist, Albert, who had to put aside his own promising career to care for his family,” he said.

The character, unlike Mitchell, didn’t handle that frustration well and alienated his family because of it.

After living in Upstate New York for 60 years, Albert struggled to find a way to rebuild a bridge back into his son’s life, Mitchell said.

For many aspiring authors, writing a novel may be fun to dream about, but difficult to see through to completion. It takes more sustained, disciplined hard work than they first imagined.

“What kept me going through the process came from the way I approached it,” said Mitchell. “I put myself in the mindset that writing was going to be my next career. I didn’t think about retiring as much as I thought about starting a new job. I spent more than 30 years in health care. God willing, I’d like to spend the next 30 as a writer.”

Once retired, Mitchell established a new schedule of writing to replace his old schedule as a nurse practitioner.

“I tried my best to be at my desk several mornings a week and work into the afternoon,” he said. “In my mind, I didn’t call it writing. I called it working. I am not the most self-disciplined person you will meet but this was effective even for me.”

As time went on, Mitchell’s enthusiasm grew for his new job and the characters he’d created.

“They became like a second family to me and I had to find out what happened to them,” he said. “Although I had the entire novel outlined, you never know exactly what each turn in the road will bring.”

Writing a novel actually gave Mitchell some insight into what schizophrenia might feel like, as his “alternate reality” was constantly banging away inside his head.

Pressing on when the finish line is out of sight can be tough, said Mitchell. So encouragement from friends, family and professionals played a big role in his journey.

“I had an editor who kept me going,” he said. “And I asked friends and relatives to read early drafts and they were encouraging.

“Overcoming self-doubt is very hard,” said Mitchell. “At one point I hired a writer who didn’t know me well to comment. I actually hoped she would tell me the book was hopeless and shouldn’t be published so I could give up. But she was encouraging as well, so I persisted.”

Self-publishing the book also turned out to be more complicated and frustrating than expected. But once again, Mitchell said he “had people to guide me and do the technical work to get that done. They were very supportive as well.”

If social media and email comments are any indication, the response has been very positive.

“What has been most satisfying is the wide range of readers who have enjoyed it,” said Mitchell. “It has quite an overt Christian message, but some of my biggest supporters are devout atheists. In fact, my editor is a-religious.

“People love, like and heartily dislike the various characters,” he said. “Readers like the uplifting ending and the message of forgiveness.

“And local people enjoy the many references to the Finger Lakes region and local landmarks,” said Mitchell. “One of my goals was to use this locale as one of the characters. I think the landscape and culture of this area shaped the lives and reactions of the other characters.”

For Mitchell, authoring a novel required a complete about face.

“Writing is a solitary pursuit bordering on misanthropy,” said Mitchell. “For me it was a 180 degree change from my previous job as a healthcare provider. However, for intellectual stimulation I can’t think of anything better.”

And it was a great chance to continue learning.

“I saw it as an extension of my writing education,” he said. “I looked at it as a self-taught master’s class. I spent several months reading books about writing before I started the novel itself. I finally settled on one and used it as a text book. I followed its steps for writing a novel almost to the letter. That is what gave the story its structure.”

As is true for most novelists, “Mountains Can Move” required considerable research.

“The main character is painted in the abstract expressionist style and his philosophy of life most resembles that of the existentialists,” said Mitchell. “Believe me, I was not an expert in either of those. So I spent many weeks studying those topics. It takes much more knowledge than what gets in the story to have confidence in what you reference.”

Establish a routine. The first step to writing, or retiring in general, is to find something that gives structure to your day, Mitchell said.

“I really believe it’s key to look at retirement as changing professions rather than stopping working,” he said. “A related key is to allow yourself to take your new avocation seriously. You don’t have to punch a clock, but you have to make it a part of your daily life.”

That’ll require a supportive spouse and circle of friends, he said. In order for that to happen, one must communicate this idea of change rather than retirement to everyone. It’s a message that also brings accountability.

“This doesn’t mean I don’t take time to be a husband, grandfather, gardener, hiker, keeper of alpacas, and photographer,” said Mitchell. “What it does mean is it gives me something to build these other interests around.”

Some writers may have one novel inside them, just waiting to be written. Mitchell believes he has two, and has already started a prequel to “Mountains Can Move.”

“It starts out in the late 1960s so it has been fun researching and remembering that era and tying it into the story,” he said.

As he pounds out novel number two, Mitchell continues to enjoy the Middlesex hillside homestead and alpaca ranch he shares with his wife, Joan, also a retired health care worker.

Mitchell is also an accomplished photographer who enjoys winemaking, history, and all things out-of-doors.