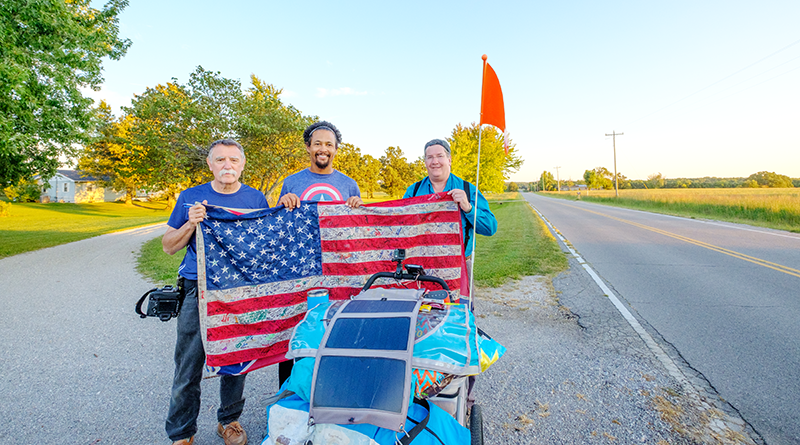 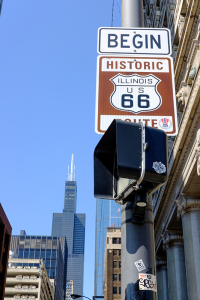 Tod and Buz were on the road again — In spirit.

The stars of the early 1960s TV series “Route 66,” with its memorable musical theme, left an impression on a generation.

Brent Walton, 61, and Paul Bardotz, 68, are professionals who have moved on to new careers as photographers. Both are married, and both are still learning. Part of their learning is to stretch themselves into something new.

Bardotz, from Chili, and Walton, living in Palmyra, bumped into each other in a summer workshop on lighting techniques in 2016.

Walton asked his new friend if he’d like to take a road trip following Route 66 from Chicago to California. It would take a month, and they’d take pictures along the way — thousands of pictures. Walton had already asked his wife, Elizabethe, who said, “No. Too boring.”

“It sounded fascinating to me,” said Bardotz, a former bridge maintenance coordinator for Monroe County and University of Buffalo grad with a master’s degree in public administration from SUNY Brockport. “It was an adventure. I’d never been out that way. Brent and I got along well.” He also checked with his wife, Barb. She said, “Go!” 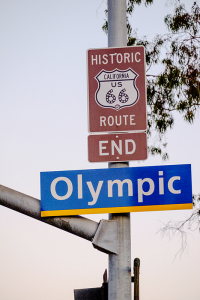 Then the reality of the trip hit.

“Yes,” agreed Paul. “We understood each other and our little quirks. He didn’t think mine were so weird and I didn’t think his were weird.”

Walton, with a degree from California State University-Sacramento, was a network engineer for AT&T for 15 years, leaving California and the job to become a professional photographer in Wayne County. He and Elizabethe visited the Palmyra area and Elizabethe fell in love with the landscape and its religious history.

Before the trip started, Walton did a year’s worth of research.

Right after Labor Day, the guys rented a car in Chicago, and started at the eastern end of Route 66 armed with maps, a Route 66 smart phone app, books, cameras, equipment, clothes, and Pandora channels for The Eagles and period music. It was as if Tod and Buz were on the road to adventure again, without the Corvette, driving a Subaru.

Then came some adversity. A week into the trip, Walton was already tearing up part of his research. Some of the night’s lodgings he had so carefully booked were, well, not exactly as advertised.

Back home, Elizabethe took over as support staff. The guys would tell her where they wanted to be the next day and the day after, and she found them suitable accommodations.

And they had sponsors. Bay Photo Labs would provide photo prints to businesses they photographed, and in exchange, they sometimes got a night’s lodging or meals, negotiated by Elizabethe. Republic Wireless supported with free wireless and data services, which Walton used to set up hotspots where the guys stayed the night. MoLight provided lighting equipment; the Walworth Veterinary Hospital sponsored several meals for the team; several software providers also chipped in; a daughter working for Nataliacha Doodley Do designed a logo for the enterprise, and Warner 5 Color provided souvenirs in the form of small mirrors for the guys to hand out. They were nothing if not ready.

Walton and Bardotz said they wanted to do something to “leave our mark” on the trip. So they took photos of everything, and often got other folks involved. “We’d go into a diner, get a group photo of the staff, and upload it to Bay Photo with our trip logo and our blog logo, and they’d drop-ship the print back to the diner,” Walton explained.

“At Jerry’s Diner in Gallup, N.M., they brought out the whole staff — even the guys from the back of the kitchen — to get their picture taken,” Walton said.

In the beginning, Walton figured they’d cover 70 miles a day with their stops and side trips. The guys found out quickly that Route 66 had many changes over the years, and some of the spurs led off into the sunset and nothing else. Some portions of the old road were all but impassable. And that Route 66 phone app turned out to be a lifesaver.

At the end of the day, Walton would upload photos and text to the still active trip blog at route66Photographers.com. And there were lots of photos — Walton shot 25,000 images; Bardotz took 18,000.

They got gorgeous shots at the Cadillac Ranch in Amarillo, Texas, when they arrived at dawn, and catalogued interesting landmarks all along the way.

Bardotz felt the most memorable stop was in Oklahoma City and the Murrah Building Memorial, commemorating the 168 people killed in the 1995 bombing. “It was so silent,” said Bardotz. “Very moving.”

“One of the nicest parts of the trip was that we’d see people doing cellphone selfies and they’d see our cameras and say to us, ‘You guys ought to know what you’re doing. Would you take our picture?’”

“For me, my memories of the trip are more associated with the people we met,” said Walton. “We met a family from Israel. We ran into M.J. ‘Sonny’ Eberhart, 79, on the outskirts of Elk City, Okla. He was walking the length of Route 66. He should have finished Nov. 27.”

On another day, they encountered a younger man who gave a name that was too difficult to pronounce.

He, too, was walking the length of Route 66, with a flag signed by many people he’d met.

“At an ice cream place, we met young guys and girls from the Florida State swimming team. They were glad to be out of Florida as Hurricane Irma was coming onshore,” Bardotz said.

The guys remembered two couples from Spain who met them during the day and sent them Facebook “friend” requests that night. Walton, a former Corvair owner, met someone who had 30 of them. He was only too happy to share the afternoon showing him every one of them.

They left photos everywhere. And for some of the portraits they took, those little souvenir mirrors found the hands of maidens old and young.

“How many tourists hand out souvenirs?” Walton asked.

The cameras and the easy grace of two guys of a certain age gained them access into places where no other tourists went – the insides of homes, churches, courthouses and county buildings.

“We passed a church in the late afternoon and saw how the light was coming in through the windows,” said Bardotz. ”We went inside — there was no one there — and took pictures of how the light played across the pews.”

They met two Scottish women who got off a plane and rented Harley-Davidsons for a trip across America on Route 66. “We ran into them three times,” Walton said.

“We’re service people,” Walton said, gesturing to Bardotz. “A good part of what we did was helping people get good pictures with their cameras.” Bardotz himself was shooting a Nikon; Walton had a new Fuji mirror-less digital.

“This whole trip was just what the doctor ordered. Meeting everyone was so uplifting,” Bardotz said. “We were standing on a corner in Winslow, Ariz., with a couple from Sweden, thinking about the lyrics of the Eagles’ song.”

What’s next for the intrepid twosome?

Bardotz, on the other hand, is working to get his house on the market so he and Barb can move to Florida. If time and circumstance provide the opportunity, Paul and Brent could still hit the road together again. If two ADHD dudes can weather Route 66 for a month together, anything’s possible.

Why Route 66 Is So Famous

Route 66 played a significant role in the U.S. history, and has also been featured prominently in the media over the years. Prior to the construction of the Interstate Highway System, U.S. Route 66, which links Chicago to Santa Monica, Calif.,  was the major east to west route as population migrated to California, especially during the Great Depression. Route 66 was featured in John Steinbeck’s novel “The Grapes of Wrath” and also the film adaptation starring Henry Fonda. Later there was a popular song called “Get your kicks on Route 66” and also a television show bearing the highway’s name. It also passes through and nearby some of the most beautiful scenery in the American West.