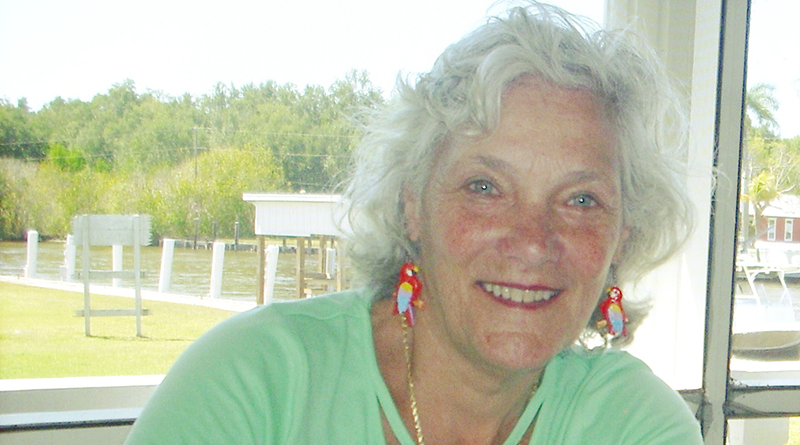 Judith Burns, 74, of Greece, had always wanted to write a book. This fall, her dream came true when she self-published her first novel.

“I just always thought it was my destiny. It’s like a drive that was inside of me.”

The novel — published under penname J.A. Goodman, “Tangled Justice: An Emma Mason Mystery” — is available for sale on at CreateSpace.com (the self-publishing division of Amazon) Barnes and Nobles’ website or you can borrow it from the Greece Public Library.

“Tangled Justice” follows police detective Emily Mason as she tries to track down a psychopathic killer who is terrorizing the streets of Rochester. When she’s not tracking the serial killer, Mason keeps busy with her boyfriend Peter, who becomes a suspect in the murder of his partner in London. As the novel unfolds, these two stories intertwine.

It’s a Columbo-style mystery where you initially meet the criminal, see the crime and then follow the detectives as they try to piece together what happened, Burns told 55 Plus recently.

“I created 48 characters, and since it was a murder mystery about a serial killer, I also ended some of their lives as easily as I created them.”

“I found I had a flare for murder, thankfully only as an author,” she joked.

“The fact that it came out as a murder mystery surprised me,” she said, adding that she always thought her book would be funny and inspirational. “But, then I started my first chapter talking about criminals and it just continued on from there.

“What surprised me is how my mind worked to comprehend an intricate and complex set of clues that I could put down on paper.”

In addition to obsessive compulsive disorder, Burns has also been diagnosed with attention deficit hyperactivity disorder (ADHD), and dyslexia.

The key to coping with these disabilities is being aware of them, she said.

“You come to realize that if you have a problem, someone else probably has it too.”

The built-in spell and grammar check on her computer are a big help too, correcting misspellings, but also adjusting words that she typed in the wrong order, said Burns.

“I don’t know what I would do without a computer.”

The computer has also been an asset for research, she said.

Judith Burns: “I love to tell and retell stories that lived in my imagination as well as my actual life. Sometimes the two would become intertwined and, as my children often complained, I lost sight of reality.”

Research was a big part of the process because it was important to her that story be believable and realistic.

For example, Burns said she wanted to make sure she had the details on police investigative procedures correct so she called the county medical examiner’s office to learn the procedure for what happens when no one claims a dead body. She also took a tour of the crime lab. “I wanted to make sure I had it right, [when I wrote] who would be at the crime scene and, who would be in the  crime lab.”

A lifelong resident of the Rochester area, Burns wrote her book as a celebration of the city and the surrounding area.

“I truly love the city.”

Characters visit local attractions, like the Lilac Festival, where they see Tommy and The Tremors, which is a real band that includes her son-in-law, and the Scenic Byway and local businesses, like J.F. Jones Jewelers.

“I love to tell and retell stories that lived in my imagination as well as my actual life. Sometimes the two would become intertwined and, as my children often complained, I lost sight of reality.”

“I found I had a natural skill, or some call it a gift, for making the ordinary sound extraordinary. My children called it a curse when the story was about them and I added a humorous twist to the story.”

Burns said she first started writing a book when she was 8 years old,” The Bobbsey Twins in Canada”, which was inspired by the family’s yearly trips to Canada and her love of the Bobbsey Twins. “Even at that tender age, I knew to write about what you knew. I wrote in a spiral notebook, and though I never completed the book, I did hold on to that notebook before sadly losing it.”

It would be several years before she could get back to writing a book.

Burns had always planned on going to college right after high school, but her mother died while she as a senior in high school and she had to put those plans on hold.

After graduating from Charlotte High School in 1960, Burns got a job as a teller at the Genesee Valley Union Trust.

Then, she married and started a family. For 10 years, she was a stay-at-home mother.

For a time, she also ran a small business. Burns wanted her children to have ponies. To help cover the cost of keeping the ponies, she started Pony Parties, which rented out the ponies for children’s birthday parties.

When her youngest child started school, she divorced her husband. Tasked with raising her four children on her own, she got a job on the production line at Kodak. Eventually, she worked her way up to be a quality control technician.

In 1989, Kodak offered a buyout, which included paying for education.

“It was a good opportunity that came my way, and I took it.”

She enrolled in Monroe Community College and graduated two years later with distinction with an associate’s degree in marketing and a 4.0 GPA. She was awarded the academic achievement for excellence and was initiated in the Phi Theta Kappa Society.

In 2004, Burns and her granddaughter, Amanda, took a creative writing class at MCC with professor Chris Perri. She wrote a short story for the class about a conversation in an alley. “[Perri] said it would make a great beginning to a book and he wanted an autographed copy when it was published. Burns promised him an autographed copy of that book. “It took me nine years, but I kept my promise,” she said.

It was a creative writing class at the Rochester Institute of Technology’s Osher Lifelong Learning Institute that provided the spark to get her working to fulfill her lifelong dream.

“I got a lot of encouragement [from my classmates] to do something with my talents. I just kind of thrived with all that encouragement. It gave me the confidence that I could actually do this.”

A year and a half ago, she started devoting mornings to writing and, last fall she finally got the chance to self-publish her own book.

As she wrote, she shared her work with classmates.

“They provided with me different perspectives and different points of view that my readers would have. They helped me broaden my writing.”

For example, Jean, a friend of the main character, Emma, approaches a man she’s interested in at the Lilac Festival, which Burns’ classmates at Osher, many of whom were married or widowed, didn’t think was realistic. “There are definitely differences in the way a married woman and a single woman have lived their life,” she said.

Burns, who has been single since the 1970s, realized she needed to add more context to explain that times have changed since the 1950s and that it is common for a woman to approach a man.

Burns attends in Osher, a member-led organization that offers academic, social and cultural programs to enrich and inspire adult learners 50 and older. It’s a way to meet new people, get exposed to new ideas and develop new friendships, she said.

“That’s kind of a secret of keeping your mind keen is to surround yourself with people smarter than you and more talented than you. It just keeps you on your toes.”

Once the first draft of “Tangled Justice” was complete, friends helped her edit the piece and give additional feedback.

Her daughter was a big help throughout the whole process, Burns said. “She provided editing as well as needed encouragement to continue.”

The hardest part about writing the book was having the discipline to sit and do the writing every day, she said.

“And once the book was written, I was really surprised at how much work still had to be done.”

For about six months she was in contact with a small local publisher, but after not making much progress, she decided to self-publish. She saw an article in 55 Plus featuring author Mary Dougherty, who runs Bootstrap Publishing, which helps other authors self-publish. Burns connected with Dougherty, who helped with much of the behind the scenes work of getting a book published, like writing an author’s bio, arranging for art for the front and rear cover and getting other writers to give testimonials about the book.

Burns is retired, but she keeps busy. When she’s not writing, or spending time with her four children, nine grandchildren and six great-grandchildren, she volunteers for several local organizations including the Rochester Visitor’s Bureau, the LPGA, the center for Missing and Exploited Children and town-wide clean-up efforts.

She’s also volunteered for the Special Olympics when it came to Brockport and for Beep baseball, a baseball program for blind children.

Her passion for volunteerism is something she inherited from her parents, she said. Burns’ father, Leo Goodman, a contractor, was also a volunteer fireman and involved in the local business association where he championed the idea of building Park Ridge Hospital, which is now known as Unity Hospital.

Burns is already working on the follow-up to “Tangled Justice”, which she hopes to have tout in June. And, once that novel is finished, Burns will get started on a third novel in the series.

“Each of the books follows the life of the characters, but each has a distinctly different murder for the reader to investigate,” she said. “I like to incorporate surprise twists and turns and surprise endings.

Burns will be teaching a memoir class at the Greece Public Library at 2 p.m. March 7.