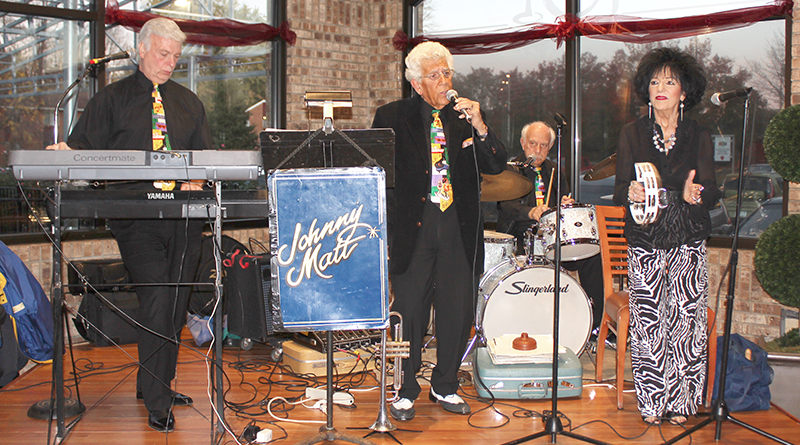 It happened more than once. The band had played for an hour, and now was taking its break before the last set. The leader, Johnny Matt, was the last to climb down off the stage.

He didn’t get far. A man approached, someone who had obviously just stopped in the Wegmans for something to take home for dinner — he had the package in his left hand — and noticed the band playing. Then he recognized Matt, and he waited for the break to shake Matt’s hand.

The man told Matt he had seen him before, many years ago, when he was a boy, and he told Matt how much his dad and mom loved the music Matt played.

Matt grasped the man’s hand warmly, and they talked, remembering together. The man walked away, smiling, with a memory to share when he got home.

Before Matt could take another step, a couple approached him, arm in arm. Another good time was remembered. More handshakes. More smiles.

Johnny Matrachisia, 80, is a living Rochester legend, a man who has made big band, swing and jazz music for people to enjoy since he was 14 years old and a sophomore at East High School.

On this Friday night at the Market Café at the Eastway Wegmans in Webster, where the Johnny Matt Band has been a fixture on Friday nights for seven years, more than 40 people were waiting for the band as they set up. By the time Matt, drummer Joe LaRosa and keyboardist Joe Miltsch, and Matt’s wife, Barbara, took their break, more than 100 people were in the café, all listening to the music.

And they didn’t just listen. When the music started, the dance floor was instantly alive with a throng of people in front of the bandstand.

“Wegmans has found a way to serve the senior citizen community in a way that’s astounding,” said Miltsch.

He’s right. Although there were some kids on the dance floor at one point, and a few young couples, this was a night out for people of a certain age, and they were all smiling.

Matt wailed through “It’s Been a Long, Long Time” and the audience jumped right into the chorus of “Just a Gigolo” with the band. He sang. Barbara sang. Joe sang. The tunes flowed. The magic settled. The room got more and more intimate as the sun started to go down.

On stage, Matt plays a Benge trumpet. He bought it more than 50 years ago after his Harry James Special Selmer model was stolen at a gig at the University of Rochester. James was a premier trumpet player and bandleader who recorded into the 1970s.

Matt got that Selmer when he was 8, a special gift from his parents. He slept with it. And from an early age, he could really play that thing.

“My music teacher in grammar school, Mr. Stark. Wonderful man,” Matt said. “He says, ‘The way you play trumpet, Johnny, you should go to Eastman.’ I told him, ‘My mother and father, I don’t know if they could afford it.’ So he set me up for a recital to audition for a scholarship. He gives me this difficult trumpet solo.

“In those days, I could memorize a trumpet solo. I didn’t care how difficult it was, triple tonguing — whatever it was. I memorized this whole solo. I get to the audition, all these music teachers are all around, no smiles, all serious. I was scared as could be. There was a cadenza in this trumpet solo. I played the cadenza and the audition director says, ‘Stop! Next!’

“I asked, ‘What happened?’ My music teacher followed me out. I memorized this whole trumpet solo, and they didn’t let me play the whole solo. He said, ‘John, the way you played that cadenza, they heard enough.’

“So, I got a three-quarters scholarship and in those days there was a department store downtown, McCurdy’s. They used to contribute to Eastman’s scholarship program, so they picked up the extra quarter of the scholarship. My parents didn’t have to pay anything. I went through eight years and graduated from the preparatory department at Eastman.”

In the meantime, Matt’s big band started up when he was 14. And with his studies at Eastman, he drew in some fellow students.

“My dad, when I was a kid, used to take me downtown to the Temple Theater in Rochester. I was about 12 years old. The big bands played during the intermission from the movies. He took me to see the big bands. Of course, whenever Harry James was there, he had to take me. When I get playing, I want to play like him.

“When I was 13 years old, I told my dad about this guy, Maynard Ferguson, I’d read about, who was playing with Stan Kenton. I wanted to go down to see this guy, but nobody was around who could take me. I was 13 years old. I took a bus by myself to the Old Sports Arena, in Edgerton Park, behind the old Jefferson High School. It’s not there anymore. I had to go see this guy, the highest trumpet player in the world. I walked behind the stage to see what kind of mouthpiece he used, if he had a special mouthpiece. It wasn’t. It was a gift that he had. He played so differently. And I never got to talk to him.”

Although the band was doing OK, so was rock ‘n’ roll, and Matt pursued other means of employment. “I didn’t pursue music 100 percent,” he said. He was in an electro-mechanical designer program at Stromberg-Carlson, took a lot of night courses, and worked for RF Communications.

He got a job selling liquor when the owner of the distributorship realized the young man in front of him was a nephew of a good friend. In the 18 years Matt worked for Ontario Liquor, two great things happened — he won a lot of sales contests and took trips to Europe and Mexico, and he found a lot of business for the band.

“I used to call on a lot of restaurants and party houses. They knew me as a bandleader. They said, ‘Gee, I need a band for such-and-such a date. Are you available?’ I picked up a lot of jobs selling liquor.”

Matt can put together a three-person group, or assemble his 14-to-16-person big band. They can easily handle swing and jazz music, and love to throw in some Latin and salsa music.

When they played opposite the Rochester Philharmonic Orchestra at a benefit, director Jeff Tyzik made a point of shaking Matt’s hand and told him, “You’re a wonderful legend.”

The trail hasn’t been easy. Rose Marie, Matt’s first wife and mother of his three sons, died in 1989. He married a second time, to Carmella — Rose Marie’s first cousin. She died in a car accident.

Barbara was married to LaRosa, and they would go places with Matt and Carmella. After the deaths of Carmella and Joe, Matt and Barbara consoled one another and fell in love. But tragedy continued to follow. Barbara’s daughter, Lisa, died two days before her wedding. Lisa’s heart just stopped. Matt’s son Jeff died after a car accident.

Now, after all the years, all the tragedy, Matt and Barbara make a pair.

“I’m so blessed to be part of his life,” Barbara said. “His other wives, and they were great ladies and I knew them, never got involved with his music.”

A former dancer and dance instructor, Barbara is all energy and movement.

“I stopped answering the phone when I married Barbara,” Matt said. She took over as his business manager, booking dates, and charging enough for the band to be profitable.

The two are born-again Christians and know how lucky they are to have full lives and enjoy good health. “The best gig I play is when I play for the Lord in church,” Matt said.

They spend a couple of months in Florida each year, and Matt plays in three bands down there. When they travel to New Orleans, he takes his horn and ducks into jazz clubs to sit in for a session or two. He’s always welcome.

“We don’t look at our rearview mirror when we drive in life,” said Barbara. “We look at where we are now and where we’re going. That’s all that matters. The past can’t be changed. If you get stuck in neutral, your life is worthless.”