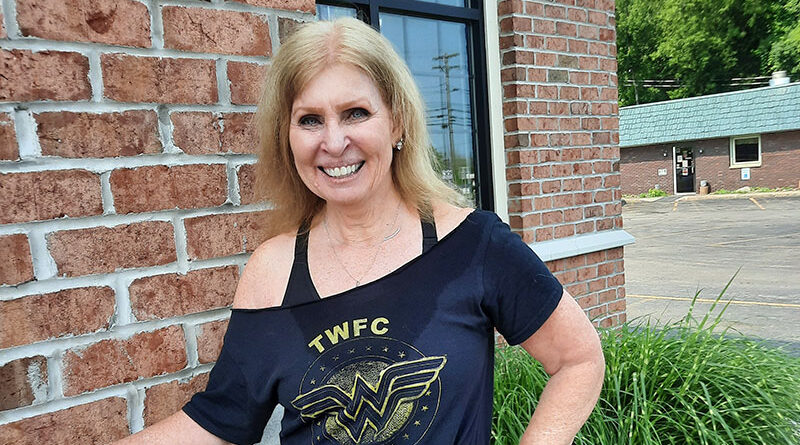 Wherever she goes I will follow her,” said fitness enthusiast Flo Guy when asked about Val Snelgrove, the owner of The Women’s Fitness Connection in Spencerport.

And Guy isn’t the only one. Countless other women are loyal to Snelgrove’s fitness classes. Like the Pied Piper of fitness, Snelgrove has a magical touch that transforms students into friends and friends into students.

Snelgrove, 66, was a cheerleader ever since she was a girl growing up in North Greece. Just two and a half years after graduating from Olympia High School she returned as their cheerleading coach and stayed for 30 years.

While coaching, Snelgrove returned to college for her teaching degree from SUNY Brockport. She taught at various area schools and spent her last seven years at Arcadia Middle School as a science teacher before retiring in 2010.

During her years as a teacher and coach, Snelgrove was also keeping up with her personal fitness. She became a member of the Rochester Athletic Club for Women in Greece in 2000. Not long after that she got her Zumba (a dance workout) teaching certification at age 56. Three weeks later she started teaching at the RAC. One by one she began getting other fitness teaching certifications such as barre, Pilates and yoga.

Snelgrove had built up a following of students while teaching fitness at the RAC, but COVID-19 put a stop to classes at the RAC when they had to close temporarily in March. Snelgrove was in Florida but agreed to teach online classes. She then started her own Facebook group where she taught other virtual workshops.

In August 2020 Snelgrove, her students and her fellow teachers received the sad news that the RAC in Greece was permanently closing.

Time moved on, it soon seemed like the ability to teach in person was at hand. But without the RAC what could she do?

Snelgrove’s friend suggested that she teach classes at a local dance studio. She reached out to David Interlicchia who let her teach at his studio in Greece, Dance Biz.

But after a second COVID-19 shutdown, she realized that she needed her own space. That’s when she found 5017 W. Ridge Road in Spencerport. On June 1, she celebrated the grand opening of The Women’s Fitness Connection, LLC, a woman only fitness studio offering classes in Zumba, yoga, barre, step aerobics and much more including a Dance Abilities class for students with different abilities. The class is designed to “improve motor skills and socialization skills” and is open for students ages 10 to adult.

“They come in with their caregivers and they spend 45 minutes just having a blast.” said Snelgrove.

Snelgrove has put both sweat equity and her savings into the development of The Women’s Fitness Connection.

“I have invested my own money into buying all the equipment, getting started and, hopefully, we’ll dig ourselves out over the next year,” she said with a chuckle.

She has several teachers on staff like Rachel Heberle of North Greece.

“She is an amazing person, inside and out,” Heberle said of Snelgrove. “She’s fantastic, so kind, so encouraging. She’s become one of my very good friends. So it was just a no-brainer when she said she was opening this place. I said, ‘I’m here.’”

Once the building was spruced up, the equipment in place and the staff ready to teach, the students came in droves.

Like Guy, Kathy Phillips of Spencerport, followed Snelgrove from the RAC. She also knew her because they were both cheerleading coaches. Now she takes several different classes at the new studio.

“I call it a silver lining to the pandemic, because this woman is so amazing and she opened up her own business in the midst of a pandemic and she’s just awesome,” Phillips said.

Joanne Bourne, of Spencerport, came to classes with Phillips. She likes Zumba the best but also enjoys the strength classes they offer.

“I have exercised all my adult life and kind of stopped during the pandemic and couldn’t really find a place to go,” said Bourne. “I’ve only been here this month, but I love it. I mean the women are wonderful. The instructors are wonderful; lots of variety of classes.”

It’s clear that Snelgrove’s students are happy in her presence and peals of laughter rang out when Snelgrove loudly declared “I love you!” to a packed class of more than 20 smiling, sweating women during a Thursday morning Zumba class last July.

“We’re trying to make this a community centered organization where it’s not just about your physical health; it’s about your mental health,” Snelgrove said.

Karen Alfieri of Greece feels this community support every time she comes to class.

“I feel like she really cares about us, and she’s very open to all of us,” she said. “It’s like we’re her buddies or friends and it’s nice to feel like you belong to a group that’s like you. We’re like a big happy family here.”

“That is exactly the point of it all,” said Snelgrove. “It’s like a sisterhood. I think we’re real niche, because we’re just women.”

‘A group that you can relate to’

The studio has approximately 100 different people coming to various classes despite only being open since June. Most members range in age between 45 and 85.

“We are able to modify for all different levels,” Snelgrove said.

When discussing a recent class, she noted that some students are extremely exuberant and move with ease and “some of them were dancing, and had a great time, but aren’t able to either remember [or do] the steps. I don’t care—you’re moving for 45 minutes or 60 minutes.”

Alfieri really loves that she can walk into a space where the majority of the women there are, including the instructor, in her age group. And seeing Snelgrove in front of the class inspires her to work harder to be fit.

“She’s inspirational, she’s energetic, and I said, ‘She’s like a year older than me. Well, I want to have that much energy, too.’ I mean, she does workouts that I can do,” Alfieri said. “Some of the younger ones, I just can’t keep up with. Most of the ladies are 50 plus or whatever. It’s great to have a group that you can relate to.”

Snelgrove considers her age an asset to her life and her job.

Because of certain physical limitations and health concerns her parents were unable to be as physically active when they were the age she is now.

“It really makes you stop and think, ‘Wow, I am so lucky,’” she added.

And that feeling of luck extends beyond her physical capabilities. She feels tremendous gratitude for the women who attend her classes and surround her daily. Snelgrove didn’t have children of her own, so becoming a coach, teacher and a fitness instructor gave her an important role in life.

“You know I didn’t have that experience, so I needed something that would kind of fill that gap. For me, that was a hole in my heart and this does it, it really does,” she said. “When I see what I’m putting out into the community, it’s like this is just feeding me, it’s just awesome. Yeah, I love it.”

Snelgrove lives in North Greece with her husband of more than 44 years, Warren.

Learn more about Snelgrove and her studio at thewomensfitnessconnectionllc.com or call 585-752-6067.

Photo: Val Snelgrove, the owner of The Women’s Fitness Connection in Spencerport. She has a magical touch that transforms students into friends and friends into students.