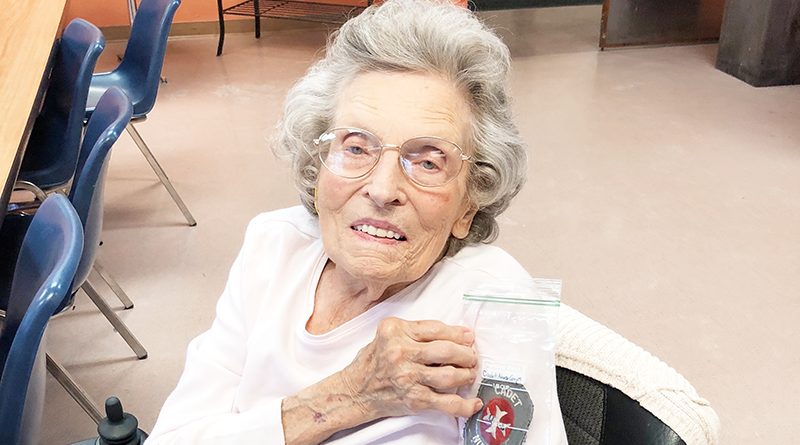 Q: How did your nursing career begin?

A: I got into the U.S. Cadet Nursing Corps in 1943 at Middletown State where I studied psychiatrics. As a young girl, I would travel with my father, Clarence, who was a veterinarian. Depending on where the call was, my father would take me with him. I thought it would be nice to do something like that someday. There was something about helping people. I started doing medical, surgical, and obstetrics training at Fordham Hospital in New York City. When it came to getting into the nursing field, it was just something you did in war time as one of our options. There were not many choices for women to better ourselves. After I graduated, I went to Rhodes General Hospital in Utica and I was just 21 years old caring for wounded service members. The patients from the Japanese prison camps were some of the worst cases I saw. It was difficult but I just really enjoyed helping others so this was something that I was meant to do.

Q: How did you wind up in Rochester?

A: After the war ended, I married my high school sweetheart, Donald, who was in the Navy. I got married in 1945. We met in history class and he was a little bit older than me and then he went off to college. He had to go to war because that was just the way life worked back them. He flew blimps in the war. We had three great kids. We did so much travelling. I lived in California, New Jersey and we eventually made our way to Rochester. We came to Rochester in 1960 and we have been here ever since. Later in life, I worked at Highland and St. Mary’s in the neonatal intensive care unit for 25 years.

Q: Tell the story about how you got all those patches.

A: I don’t know how it started. All of a sudden I just started talking to patients and asking them if I could have their patches. I was getting them from so many places and I have more than 70. I have patches from Persia, Africa, Alaskan patches and others. They are all so very different and beautiful. It is interesting distingusing one from another. Talking to the soliders helped me to get to know them and their lives. Each patch has a person’s personal story because most soliders are a quiet group. They weren’t the kind of people who talked about their injuries or what was going on during the war. They were here because they were injured and we were a rehabilitation hospital. They were in so much pain and it helped just to be able to talk with them for a little while. I just saw the patches as beautiful and it really helped me connect to the soliders. I didn’t expect to collect this many.

Q: What do you enjoy about the Rochester and Upstate New York area?

A: I just think it is beautiful here. You have great looking buildings and a strong community. If you like sports, there are a ton here. I enjoy the libraries and there are great nature hikes and nature clubs. I like looking at the different birds you find in this area. It is just a nice place to live.

Q: What do you enjoy doing to relax?

A: One of my favorite things is gardening. It is so relaxing. There are so many different types of plants that I am interested in. I learned a lot about gardening through “Victory Gardens” which was the name of a television show that I used to watch. I am part of the Green Thumb Society at St John’s Home. There are so many great people I have met at St. John’s and really makes you feel like you are part of a community. It is just something that I have always loved.

Q: What do you believe is the reason for your longevity in life?

A: I never cared to smoke or drink. But I still had fun in life. One time, my friend and I stuffed our bunks with pillows and snuck out of the army base to go dancing. I took the train from Utica to New York City and we were back before morning. We were tired the next day, but we didn’t get caught. We just decided we wanted to kick up our heels for the night.