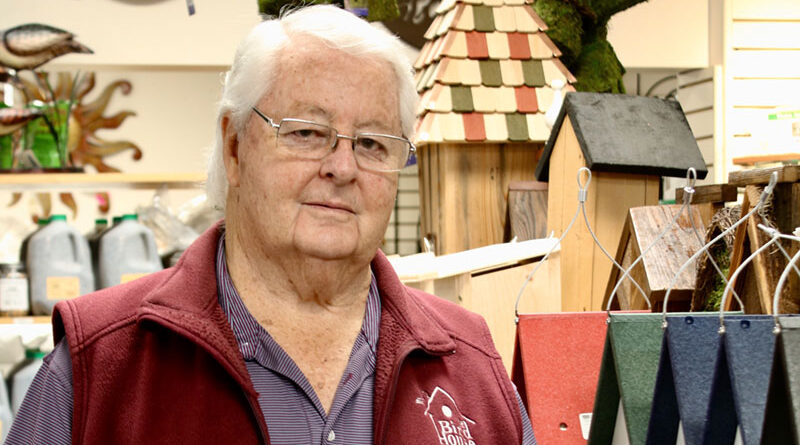 What happens if you take all you’ve learned in corporate management and put that into an enterprise of your own on a local scale, say, opening a nature-themed store that sells supplies to birders?

“It was a hit right at the beginning, far exceeding my expectations,” said John Gerhard, 79, of Mendon. “We were quite successful early on. I thought, ‘This is pretty good.’”

He debuted the Bird House, on Monroe Avenue in Pittsford, in 1994, following ascendant corporate careers at Mobile Chemical Plastics and later at the Nixon Peabody Law Firm.

“We started from scratch,” he said. “We wanted to get into nature art and went to a show in Detroit where I ran into a guy I went to high school with, Ernie Kramar, who was selling birdhouses and feeders. I got intrigued. He helped us get started – I paid him a fee to teach me the business.

“In the beginning, we had a little bit of nature art – but not for long. We had bird houses and feeders and seed and hardware, and various accessories like bird baths.”

“It’s a good hobby,” Gerhard explained. “I didn’t know anything about birds – never had a bird feeder in my life.”

But right then, he drew the line between a rookie in the bird house business and someone who has led corporate enterprise. He said many people who open a store like his are hobbyists, “with no real idea how to run a business.”

He came at it from the opposite direction.

Fresh with a degree from the University of Detroit, where he’s from, Gerhard worked for Chevrolet, then took a job as a financial analyst at Mobil Chemical. A succession of controller positions around the country followed with more and more territory and responsibility under his leadership.

When Mobil offered him a next position overseas or on the west coast, Gerhard hesitated. He enjoyed the Rochester area and had settled in.

“Just when I decided I would take care of my future I got recruited and I wasn’t even looking for a new job.” He was drawn to the Nixon Hargrave Law Firm as the executive director. “I never had a law degree,” he said. Nixon Hargrave was about to expand from 130 attorneys to 720 and become Nixon Peabody. “They needed to have somebody make 720 lawyers into a business,” Gerhard explained. “That was my job.”

In doing his job, Nixon Peabody was named one of the best 100 companies to work for in America in Gerhard’s last three years there. He retired in 2007.

The investment in The Bird House in 1994 was also an exercise in what he’d learned at Nixon Peabody.

“You talk about the best companies to work for in America: the same principals I established at Nixon are the principals we use to run the Bird House: treat the staff as partners in the business, have regular meetings and training sessions, keeping them advised on how the business is doing. They become partners. We also treat suppliers that way: as partners. It’s all customer-focused.

“The principal in running this business, like any good business, is surrounding yourself with good people, give them a little bit of direction and get out of their way. They all have the authority to do whatever it takes to satisfy the customer.

“We have very low turnover – many employees have been here 10-15 years. Another aspect of the success of the business is that they really know our products and can help people do birding right and not spend too much money.”

He provided an example.

“One of the things we have as a semiannual event is feeder cleaning. We have customers bring in their feeders – in the fall we get about 350-400 feeders, in the spring, about 500. Customers bring them in, and we clean them for nothing – it’s free. And they come in and pick them up. It’s a loyalty program that has worked very well for us. Nobody else in this business does this.”

Gerbard has mailing and email lists and keeps customer-purchase records. For instance, people will take advantage of the store’s “buy four get one free” offer on large bags of seed. But most customers will only take two bags at first. The store has a register which keeps a tally for the next visit by the customer to pick up their other bags of seed.

The store, which started on the opposite side of Monroe Avenue in 1994, has recently expanded to 5,900 square feet, and is fabulously colorful – it’s always spring and summer inside. There are racks and shelves and displays of bird baths, statuary, fairy gardens, bird houses, birding books, birding adventure hats, clothing, binoculars, artwork, maps, feeders and hardware, slippers, cards, jewelry – every 10 feet. Everything is quality and chosen carefully…and it’s the second-largest bird store in the country, according to the owner.

Gerhard promotes from within. Wife Sue was a manager, and after her, Liz Magnanti took over in the shop. “Liz has a great background,” Gerhard said. “She was a clerk and I told her I was going to make her my administrative assistant. That lasted about three weeks. She showed she was capable of running the store: that was obvious right away.” Magnanti has been the manager for 13 years.

The coronavirus has affected everyone, but for the Bird House, it’s been a blessing.

“We’ve been very fortunate during this pandemic, which has been a tragedy because there are a whole lot of people hurting as a result of the shutdown of the economy. It’s a terrible situation for a lot of people, but we happen to be at the right place at the right time.”

“A lot of people are at home now who used to go to their office or downtown to work. They see the birds and have become enamored of the whole birding environment and our business has just gone from good to outstanding. Since we were able to open the store fully in June, we’re averaging 100 customers per day – a very busy store.

“Since I started 26 years ago, I’ve developed contacts all around the country. The birding business has increased nationwide 20% since the start of the pandemic. Our sales have increased a lot more than that. I describe it as having the wind at your back, after I tell people all about the good management, the fact of the matter is we were at the right place at the right time.”

Gerhard learned lessons through the pandemic. First, selling online is a good thing. When the store could not open for customers, the front patio – “porch” – became a takeout area. Customers would call in or order online, and the employees who were working would place packages outside.

“We never closed in the pandemic,” Gerhard said. “I didn’t lay anybody off.  I told everyone they would continue to get paid through the PPE plan – whether they work or not. A number of people decided they were too afraid to work. I had enough other people that we were able to do the business we had. Everyone got paid whether they worked or not.

“I told people they didn’t have to give me any details. When that program ended, when the governor declared you could allow people in your store and operate it like a regular business – I told them they had to make a decision to work here or not. I lost two people who, for health-related reasons, decided not to continue.”

A second learning: many people who shop don’t want to touch anything, so Gerhard has put in a new touchless credit-card system.

He starts every day at home by reading for three hours and spending about three hours in the store five or six days in the week (the Bird House is open every day) negotiating prices and doing marketing and accounting.

“I have a growing, vibrant business,” he said. “Most of our customers are older, have discretionary income and have learned that birding is an inexpensive hobby that supplies a lot of enjoyment, especially for retired people.