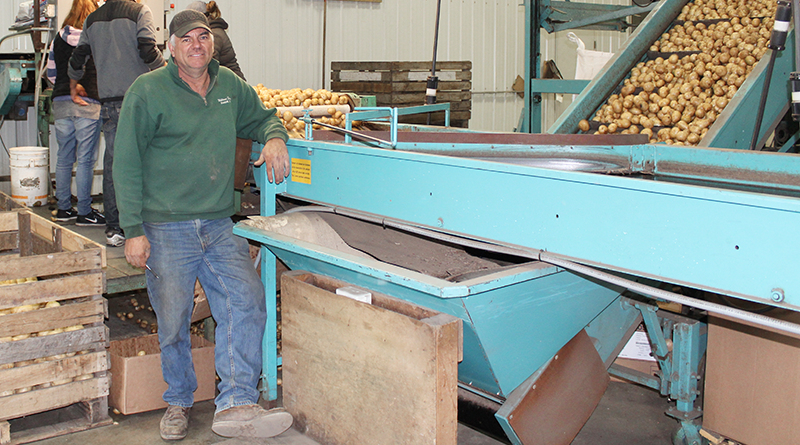 Remember the scene at the end of “Raiders of the Lost Ark” when Indiana  Jones wonders where the Ark of the Covenant is and viewers see it crated, being wheeled into the bowels of a cavernous warehouse?

Stepping into the warehouse at Williams Farms in Marion in neighboring Wayne County feels like that, only instead of seemingly endless rows of artifacts, it’s potatoes. Literally tons and tons of potatoes.

John Williams, 57, president of Williams Farms, was behind the transition of the farm from a local grower to a major distribution hub in the potato industry. Through Williams’ direction, Williams Farms grew to supply every Wegmans store with Wegmans brand potatoes, as well as a few other labels, including their own brand, Sun Valley. The farm also supplies other retail venues and restaurants.

“I’d always wanted to do distribution,” Williams said. “My uncle and cousin were in the distribution business. I thought it was a good opportunity. The demand expanded for me. Now we’re moving product from all over the country.”

John and his brother, Steve, represent the third generation on the farm. Their grandfather, Hipliet Williams, established it on 38 acres in 1949, growing spinach, celery, carrots, beets and apples. As his son, Douglas — John and Steve’s father — joined the business, onions, cherries and potatoes were added, along with about 20 more acres. These days, Williams Farms, LLC farms 1,200 acres.

In addition to expanding its footprint, what made the biggest difference in the farm’s profitability in a time when so many family farms don’t make it is turning to potato storage, packing and distribution, beginning in the early 1990s, which John Williams calls the best decision he’s ever made. “Our sales have really grown a lot because of that.”

John Williams has worked on the farm his entire life and manages shipments from all over the nation and heads the packing and warehousing, which is mostly potatoes and onions. This aspect of the business allows the farm to make money year-round instead of only seasonally as a grower. In the near future, the farm is considering expanding the packing business to include other products. Steve Williams takes care of more of the farming and equipment side of the business.

It’s a lot for Williams and his brother to manage, but the security it affords them makes it worthwhile, they said. If one crop fails, another will see them through.

“Everyone has different ideas and ways they think they should do it,” John said. “It’s a challenge to manage it all sometimes.”

Despite these occasional minor disagreements, he enjoys the business immensely.

“I enjoy dealing with the customers and the challenge of whatever we grow,” Williams said.

One of his children runs the beef farm, but he thinks the other two may be interested in returning to the farm someday.

When not working at the family business, Williams likes to ski, snowmobile and pilot small airplanes.