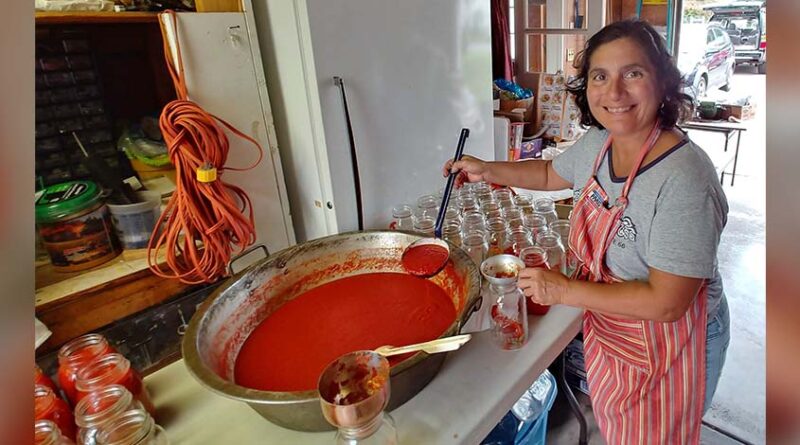 For East Rochester native Emily Amalia Folino Perez, cooking has never been a solo endeavor. It’s a group sport, a way of life, and the magnet that draws and keeps her family together

But for Emily, whose culinary traditions run as deep as the Ionian Sea, cooking has never been a solo endeavor.

It’s a group sport, a way of life, and the magnet that draws and keeps her family together. Their dishes, spiced with laughter, love and spirited debate, mark the passing of seasons and the centrality of tradition.

“We are loud,” she jokes. “It sounds like we’re always arguing. But we’re not, we’re ‘discussing loudly.’ Everybody has an opinion about how it should be done.”

Cooking days invariably include at least one midday break for glasses of wine, cups of espresso, cookies and storytelling, and culminate with a family feast to celebrate a job well done.

“Growing up in an Italian family, food has always been at the center of things — it has always brought the family together,” said Emily, an expert automotive mechanic and pre-K teacher assistant in East Rochester.

“I remember my mom always cooking and baking,” she said. “I used to wake up to the smell of sauce already cooking for Sunday pasta.”

It was those aromas and flavors that continue to stir memories of her childhood and family and cooking together.

Those recollections became even more poignant following the death of her beloved parents, Teresa Zaccone Folino at age 90 in 2015, and Domenico Folino at age 96 in 2019.

That’s why she carries on their culinary legacy — for future generations and also for herself. It’s a time to remember, connect with and honor her parents.

Sunday pasta was always a big deal, she said. And so it will always be.

Many track the passage of time by the calendar on the wall. Emily’s family looked to the kitchen.

“Our seasons have always been divided up by foods,” she said. “Fall was tomato sauce and winemaking season.”

Together, multiple generations spent two days picking tomatoes at a local farm and hauling them down to the second kitchen in the basement. Seven to 10 bushels yielded about 50 to 70 quarts of sauce, she said.

“It was expected — it was the way we spent time together,” she said. “My father rigged up an old washing machine motor that helped us separate the tomato seeds and skins from the pulp. And I still have my father’s wine press.”

Then came the holidays, with turkey, escarole and meatball pastina soup on Thanksgiving, because “you always started with soup,” said Emily.

For Christmas Eve it was seven fishes and homemade fettuccine, and on Christmas day the family feasted on homemade lasagna or stuffed shells and some meat — often braciole or meatballs.

New Year’s Eve and Day meant two kinds of homemade manicotti: one filled with ricotta and the other with meat stuffing.

“Then when it started getting cold in January and February, it was time to make sausage, capicola, prosciutto and bacon,” said Emily. “We’d go to a meat market and get various cuts of pork and then come home and make it and hang it up in the attic or fruit cellar to cure. We also made fresh sausage to eat right away.”

Easter was always a big religious and food holiday, and the family table would often feature a lamb or goat.

That’s one tradition her family doesn’t carry on, though. Emily remembers all too well the childhood trauma of playing with animals that came home and then seeing them later on the Easter table.

“In spring it’s time to dig up the garden and prepare it for planting,” said Emily. “In the summer we’re tending and harvesting. And by the end of harvest, my parents always had a freezer full of vegetables.”

Four childhood trips to the Calabria region in southern Italy whetted Emily’s appetite for ancestral connection early on, but raising her family of seven took priority for several decades.

“After our kids grew up, I was able to get more in touch with my relatives,” she said, and found her way back four more times to her roots in the village of Zagarise, Calabria.

A global pandemic thwarted a return trip in 2020, but summer 2022 promises a reunion with cousins, aunts and uncles and the next generation.

“My brother has bought a house in our village and I’m hoping to buy a house by the Ionian Sea where my cousins live,” said Emily.

This summer, she hopes to join extended family making wine and tomato sauce, and sharing “big meals because there are so many of us.”

“My aunts and uncles each had seven or eight kids, so our meals are always huge and pasta is always part of it,” she said.

A surprise to Emily was that her relatives all carry on the same culinary practices she had been taught, to the letter.

“My cousins prepare food the same way we do, so it was family traditions passed down,” she said. “Then it was to survive — now it is to remember.”

It’s a legacy that will live on.

“I think my boys are proud of their Italian heritage,” said Emily.

“They enjoy the food and help out and travel with us when they can. It’s a matter of being there and doing these things. You can’t really teach it, you just have to be there and do it.

For Emily, passing on her parents’ recipes is always a “yes.” But for others it may seem daunting.

“Don’t be afraid to try to do these things, just because they seem too difficult,” she said of cherished family dishes. “Now that my mom and dad are gone, if my kids don’t carry it on, it doesn’t go any further. It may not taste exactly the same way Noni made it. But it’s OK.”

She remembers so clearly the last years her mom was alive.

“Whatever I was making down in the basement, I would show her,” said Emily. “‘Is this what it should look like?’ I would ask.”

“She was proud and happy that I was able to recreate what she always did,” said Emily. “And I wanted to get her approval. She was happy, and I was happy.”

Some skills were learned early on, and never questioned.

“When I make the pintachiuse, I use white raisins because ‘they’re better than the dark raisins,’ my mom said. And ‘you have to wash your raisins the night before,’” said Emily. “I don’t know if it’s true, but I do it because my mother told me to.”

“When we make bread or pita fritta, you have to make three crosses on the dough so it will rise properly,” said Emily. “It’s not because I necessarily believe it, but because my mother told me to.”

A central fixture in Emily’s East Rochester home is her mother’s recipe ledger, with many recipes written in a hybrid blend of Italian and English.

“It’s not in any order, and it’s written in my mom’s handwriting,” said Emily. Some American words are sprinkled in, but written phonetically to reflect her strong accent. She gives lists of ingredients, but not many directions. So if I didn’t see her do it, I wouldn’t know how to make it.”

“Food wasn’t just a way of nourishing ourselves, it was a way of being close as a family … “There was lots of joking and eating, espresso and cookies — through it all there was always food.”

When she retires, Emily hopes to compile a collection of those recipes with translations.

“It’s going to take a little reading,” she said. “Many are not exactly Italian words or American, but as I read, I can hear my mom’s voice. She wrote it the way she talked, and that brings us close.

So it is for many — the tastes and the aromas of childhood bring back memories of time spent together.

“Food wasn’t just a way of nourishing ourselves, it was a way of being close as a family,” said Emily.

“It was work, but we also had fun doing it. After the work was done we’d make pasta and have a meal together that featured whatever we had made.

“There was lots of joking and eating, espresso and cookies — through it all there was always food.”

Featured image: Emily Amalia Folino Perez at her East Rochester home preparing a batch of tomato sauce for her family.