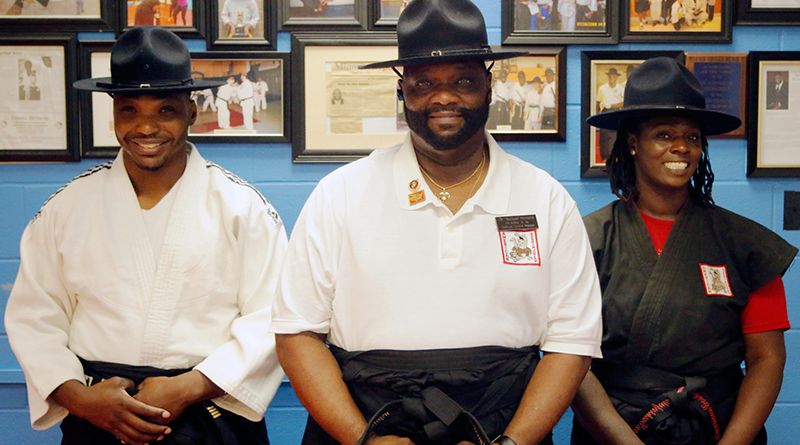 A family that does martial arts together, defends together

A little over four decades ago, Kamae McNeill was about to start high  school in Brooklyn.

“Many times in grammar school, I was running home from school,” said McNeill, 58, of Rochester. “I went to Catholic school and had to wear a uniform. It was a like a marker (for gangs).”

When he started high school, McNeill wanted a way to protect himself and decided to check out the judo club.

The first thing that struck him was the instructor, Patrick Beckley. “He was a thin, mid-sized white man with red hair and freckles,” McNeill said. Then, class began.

“There was an athletic prowess in the way the class was taught,” he said. “Something about the instructor was exquisitely adapted to the task at hand.”

He tried out judo that first day. “I was choked and joint locked. I now knew this was for me,” he said.

That first day back in 1972 started something that’s stayed a part of his life for 44 years, and something he’s passed on his children and grandchildren.

With martial arts, “I gained the confidence to do better for myself,” McNeill said. “Not only physically, but also in my school work. It helped me stay focused.”

McNeill, now a ninth-degree black belt, has created his own style of martial arts, American goshinjutsu. It is a style he designed especially for self-defense in the urban streets of the United States and a style that’s helped him and his children capture several titles at tournaments around the northeast and Canada.

As he’s gotten older, it’s a little tougher to demonstrate all the takedowns, pressure points, kicks and punches that make up American goshinjutsu, said McNeill.

That’s why it’s helpful to have his children so involved, he said.

Mercede started taking classes when she was 8.

“It was a way for me to spend time with my family, because my dad and my older brothers were doing it,” she said. “What kept me doing it was that I was good. I kept up with my brothers. It’s been pretty awesome to stay involved. It’s definitely a part of who I am.”

Having martial arts training made her feel comfortable when she was living abroad alone and when she visited clients in their inner city homes when she worked as a caseworker. “I knew I could keep myself safe. I wasn’t ever afraid; I was confident of my abilities,” she said.

Mercede is a program manager for an addiction facility at Villa of Hope.

“Since my father created the system, I’ve got family pride,” she said. And there’s also the pride from winning competitions.

In 1998, Kamae McNeill, Mercede and her two brothers won their division at the All Out Team Fighting Tournament at the former Stouffer’s Hotel in downtown Rochester. “To my knowledge, we’re the only school that’s swept a whole tournament,” she said.

At the tournament as well as other events that McNeill and his children attended, participants compete in a variety of different forms of martial arts.

A third generation of McNeills is also learning American goshinjutsu.

McNeill’s other children, Shamekia, 34, Sharee Fennell, 32, and Sabata Harley, 21, were also students, but they aren’t currently involved. Vincenzo, 40, also fought in tournaments and was an instructor, but he’s no longer active.

In high school, McNeill was often the only African-American at judo tournaments. But, he did well and it kept him going. It was his mother, Lillian, who made sure he got to weekend tournaments.

“She was my coach and my biggest fan. She was my foundation for knowing how to love and care for a family,” he said.

“I wanted to be a Marine since age 12. When I got out of high school, there was no doubt where I was going,” he said.

With his interest in martial arts, he was elated to learn he would be stationed in Japan.

When he arrived, he set out to find a place to train. “I had everything wrong with me. I was American, I was black and most of all, I was a Marine,” he said.

McNeill finally found a sensei willing to take him on — Grandmaster Soto, a captain in the Japanese police force. “He trained his students harder than his police officers. When that first practice was over, even with my leg pain and a problem walking, I knew I had found my calling,” he said.

When he got out of the Marines, he followed his girlfriend at the time to Rochester, where he has lived ever since.

For a time, McNeill, who works at a state facility for men leaving prison and making the transition back into society and as a security guard, had his own dojo, but for about the past eight years, he and his family have based the dojo out of the Adams Street Recreation Center in the Corn Hill neighborhood.

Twice a week, on Tuesdays and Thursdays, he, Jermaine and Mercede teach free classes for children, followed by a class for adults, for which there’s a small fee.

On the fourth Tuesday of every month, they offer a free self-defense class for women.

Once a year, they offer a more intensive, all-day class in women’s self-defense, which is also free.

During the summer, they run a free two-week summer camp, with martial arts training at its core. It also provides lessons about self-discipline and developing character to be more productive members of society, said McNeill. “We have a lot of at-risk children. We’re able to teach people — whatever their abilities — to take care of themselves.”

Offering free classes was something he picked up from Beckley, who didn’t charge for the classes at McNeill’s Brooklyn high school.

These efforts to give back to the community are an important part of her identity, said Mercede.

“I’m a social worker, a mom, a martial artist. They’re all interwoven,” she said.

McNeill and his family have been hired by police departments and private security companies to teach a class that includes self-defense, takedowns, learning how to hold on to your weapon during an attack and handcuffing.

Around the dojo, McNeill goes by Dr. McNeill, a nod to him being the founder of his own system and to him receiving an honorary doctorate from the University of Asian Martial Arts Studies, which gives doctorates to qualifying members of the USA Martial Arts Hall of Fame.

Creating your own form

McNeill taught judo and jujitsu for several years, but something was missing, he said.

Most traditional martial arts are ill suited for fighting in the tight quarters of the American urban environment, he said. “Unfortunately, the confrontations you’re going to run into are going to be in the home or a bar. You’re not going to have room for kicking, punching or rolling around on the ground,” he said.

Additionally, in Japanese martial arts, women can never achieve as high of a ranking as men, McNeill said. Regardless of whether they master the same skill set, they will always be one rank below, he said. “I don’t believe in that,” he said.

He decided to create his own form of martial arts, based on jujitsu and judo, the forms he knew.

The techniques are also helpful if you need to defend yourself against someone bigger that you, he said.

The idea to focus on pressure points came while practicing, McNeill said.

“We were doing conventional pressure points, and I was training back and forth, and when I tried to do one on somebody, my nail hit on their nerve. The person really jumped back,” he said.

When you use your fingernail along with a pressure point, “you get an immediate response and you can bring down your opponent.”