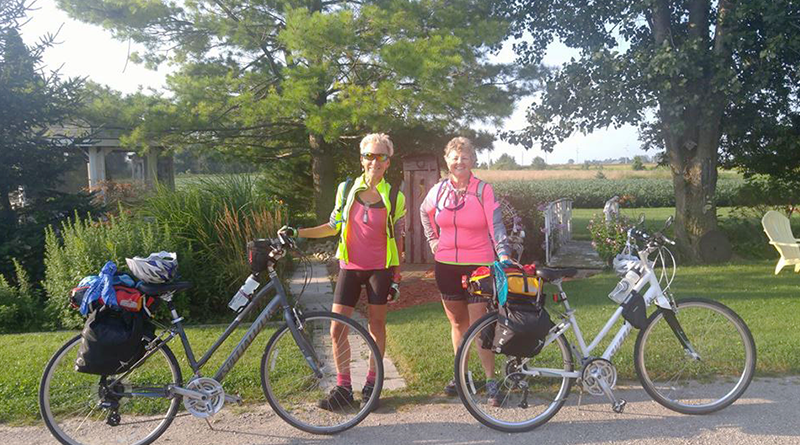 For starters, they pedaled the length of the Erie Canal, from Albany to Buffalo — 400 miles.

Last year, they took their bikes around Lake Ontario — 604 miles.

“We were inspired by a guy who did all five Great Lakes,” said Corcoran, who lives in Kendall. “To plan, you have to have a starting point, and if you cover 30-50 miles per day, what’s available to stop at? Are there towns around? Where does 30 miles or 50 miles put you? Is there a bed and breakfast there? Is there a hotel? It’s quite a project.”

Corcoran is retired, sort of. She is a professional tutor, mostly for students in New York City, whom she covers over Skype. But she’s also a principal of the Kendall Lawn Chair Ladies, and a Sunday afternoon radio personality on Jazz 90.1, where she hosts a Broadway show.

Peterson, a 27-year Xerox employee who left the company as an information security manager, lives in Caledonia. She’s busy with a granddaughter, an elderly mom, and a disabled brother. Since Xerox helped her retire, she’s been very busy.

The pair met when the radio station was doing a fund drive and Peterson co-hosted a program with Corcoran. After that, they’ve become friends and adventure buddies.

Planning for the bike hike around Huron began last winter over a large jug of margaritas.

“We didn’t want to do Lake Erie,” Corcoran said. “Erie is bigger than Ontario with a lot more urban areas. We’d have to go to Detroit to start.”

“That wasn’t too exciting,” said Peterson.

“So we decided on Huron,” Corcoran said, which meant the tour would start in Stratford, Ontario, Canada, dip into Michigan, and finish in Canada. “More bucolic — a lot of pretty scenery. Not many towns to stop in. Cornfields as far as you can see. Lots of wind — lots of headwinds.”

The two pedaled an average of 43 miles per day for 23 days. They spent a lot of chancy moments getting passed by 18-wheelers and in Canada, logging trucks. In Michigan, there was a shoulder on the road, but not in Canada. But in Michigan, as they learned the hard way, half the roads aren’t paved.

Both women rode “hybrid” bikes. “Not as heavy as a mountain bike or as fragile as a road bike,” Peterson explains. The bikes cost $500 to $750, and were equipped with the brightest lights available.

After all those margaritas, planning started in January, mapping the route, calculating daily mileage, and finding accommodations along the way, favoring B&Bs and using motels — and a camp or two – only when necessary. In January, the two made phone calls to see if all the places they wanted to stay in still existed. The trip was totally booked in February.

Between February and the kick-off date in August, the bikers got in shape. After trips in 2015 and 2016, they knew what was required.

“The very first year we did Erie Canal, 400 miles, an 11-day trip,” Peterson said. “I was convinced sometime during the trip one of us was going to get up in the morning and say, ‘I just can’t do this again. I can’t get on that bike another day.’ That was amazing to me. We never got up a morning and said, ‘I can’t do it.’ Every morning we got up and did it.”

Planning for the bike trip started in January, mapping the route, calculating daily mileage and finding accommodations. Between February and the kick-off date in August, the bikers worked on getting into shape

Corcoran said there isn’t a lot of information about how to train for a 960-mile ride through Michigan and Canada. “Most of the information is about training on road bikes for racing,” she said. “You have to make up your training as you go along. You say, ‘Oh, I have this day free — I’m going to do 50 miles. The next day, I only have an hour, I’m going to bike as fast as I can for that hour.’”

Once the trip got started, they enjoyed — and began to detest — the scrambled eggs and bacon that were served just about every morning.

“We ate 35 pounds of bacon on the trip, I swear,” said Peterson.

If they were lucky. When they got to one motel after the ferry was late, all that was available for them to eat were chicken fingers and French fries from the snack bar. At a camp, they could order anything from the menu they wanted, as long as it was spaghetti. But they were insome wonderful accommodations, too. In Kincardine, Ontario, Canada, right on the lakefront of Lake Huron, the B&B hostess had created a magical, nautical fairyland as well as wonderful meals.

The duo even developed some fans along the way.

“We’d be riding and see a coffee shop and stop and people would see the bikes,” Peterson said. “They’d ask, ‘Where you going? Where did you come from?’ They asked a lot of questions. We met strangers on the road who were flabbergasted. It’s pretty cool telling them about our trip.”

To cover all that distance on two thin wheels, the women made sure their bikes were in prime shape. “Every fourth town we’d stop in a bike shop for a tune-up,” Corcoran explained. “We don’t change tires.”

Still, they both had problems. When Peterson’s bike went lame, the owner of the motel — who also owned a garage — went downtown to bring back a mechanic to fix the bike. When Corcoran’s bike lost a gear, the owner of the Brimley Motor Inn happened to be a biker and fixed the bike before they had finished unpacking.

Corcoran carried small indexed maps for the trip, but the duo relied on — and frequently cursed — Google Maps, which sent them up deer trails and down dirt roads.

The women traveled very lightly, washing a change of clothes every night. It was priceless when they got someplace with a laundry.

In the end, they proved something to themselves. Get to a certain age and the things that keep you going are social activity, exercise and challenges.

“We learned that we’re tougher than we thought,” said Peterson. “We had some really grueling days, and we did it. Many people have asked us since the trip, ‘I know you had a lot of hills. How many did you walk up?’ We did not walk up a single hill. Not a single hill. We may have been going 4 mph, but we got up the hill.”

“A trip like this makes you come back and feel like you’re invincible,” said Corcoran. “Physically, it was wonderful. We’re both past 60, but we can go out and do 50 miles, then get up the next day and do another 50.”

“Fine, go ahead and do a century,” she said. “Then wake up the next morning and do another one, and then another one. It’s a different kind of challenge. You stay alive on your bike with an 18-wheeler next to you, with the wind, with the rain, with the bad food — and keep on biking.”

“We did it. It’s powerful. It’s a powerful feeling,” said Peterson. “It’s energizing.”

“We’re still vital,” Corcoran said while nodding to Peterson. “People should just wake up and stay vital. You feel you’re at the top of the world when you do something like this. It gives you a great deal of confidence to say, ‘yeah, I did this.’”

“And we did it on our own,” said Peterson, “not relying on anyone.”

Scenes of a Bike Trip Around Lake Huron

Route with 23 stops around Lake Huron followed by Kim Corcoran and Carol Peterson. Accommodations were very simple and the pair was always happy to find laundry machines, which didn’t happen often. 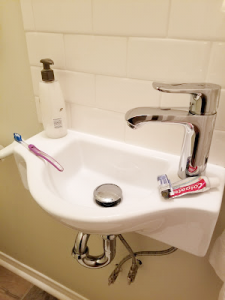 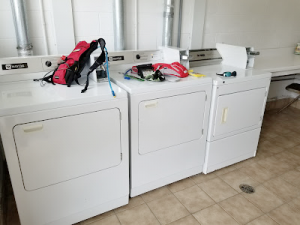 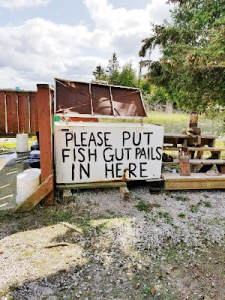 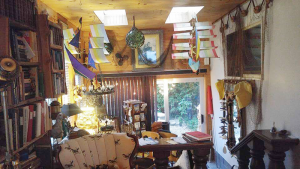 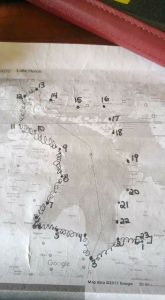