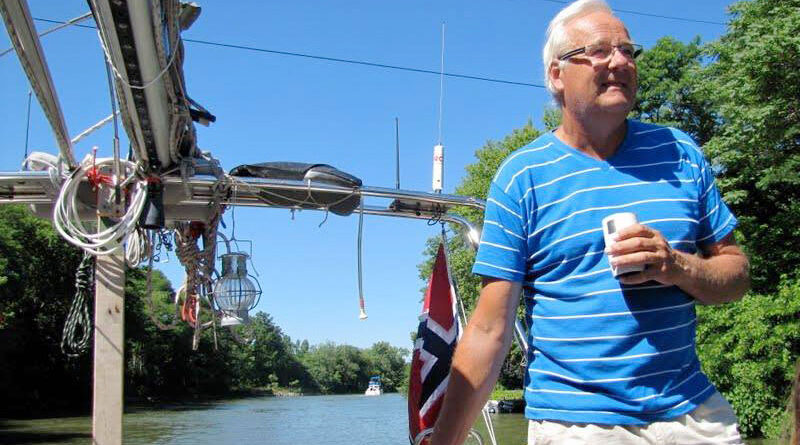 From Norway to Upstate New York: It’s a small world

If someone told you about an adventurer who confronted a deadly snake, armed pirates, and then survived a shipwreck, who would come to mind?

If you guessed Indiana Jones or Jack Sparrow, you’d be wrong. All of this happened to Harald Solfjeld of Arendal, Norway.

Solfjeld started a seven-year sailing voyage on June 12, 2010, aboard his boat the SS-Ilanga just two days before his 60th birthday. He sailed from Norway to the Faroe Islands, Iceland, Labrador then to New York City via Newfoundland. He then made his way up the Hudson River to Albany and put in at the Erie Canal. His travels along the Erie Canal are where the local portion of our adventurer’s story begins.

“It was Father’s Day and we were taking Gary out to lunch. But, after getting a phone call from Bill Andrews who said we just had to meet him we made a stop at the canal. He was from Norway and sailed by himself to the US. Within five minutes we invited him to go to lunch with us.”

Skoog was surprised by how quickly he agreed to join them for a meal. She told him, “‘You’re very trusting.’ And he said, ‘I can tell. I can tell about people very quickly and I feel comfortable going with you.’”

Solfjeld said he knew right away that Brockport was a special place with kind people. “In Brockport, I was well-received by the Skoog family and I visited Norwegian Mr. Andrews. He treated me to Norwegian alcohol so I had more than enough to find my way back to the boat.”

He continued on to Tonawanda to meet up with his wife and brother who flew in to join him on part of his trip.

Solfjeld’s next stopover in Brockport a few weeks later included a visit to the Skoog farm where Lori and Gary have a variety of animals including several horses. His family also had the privilege of experiencing Brockport’s Summer Serenades, a weekly concert series canalside at the Welcome Center organized by Gary Skoog. Solfjeld said he and his brother happily danced on the dock while the band played in front of the SS-Ilanga.

His time in Brockport couldn’t last forever and Solfjeld continued on. While this brief Western New York interlude during his journey doesn’t seem too adventurous, it is a memorable one for Solfjeld and the Skoogs.

Solfjeld keeps in contact with the Skoogs and has invited them to visit him in Norway. He plans to come back to the Rochester area someday.

“I have relatives on Long Island and also up in Connecticut, and I know a lot of people there. I will come, and I can take a tour of Brockport and Rochester when I’m there.”

Seven more years of world travel lay ahead. Sometimes his wife or other family members joined him and other times he was alone. He visited Canada, Cuba, Mexico, Belize, Guatemala, Honduras, Colombia, Panama (that’s where the bushmaster snake stowed away on his boat. Don’t worry, he bested his opponent!), Galapagos, Easter Island, and Chile. He sailed around Cape Horn and then north again to Argentina, Uruguay, Brazil, French Guiana, and Suriname.

It was during this leg of the trip in 2013 that he was accosted by Brazilian pirates.

“I was sleeping and at three o’clock in the morning, I heard something, and I looked out and [there were] two men with a mask and a revolver and a knife. And he says, ‘I kill you.’”

Solfjeld worked for many years on oil rigs and was trained to keep negotiations going if such a situation ever arose. He spoke Spanish and they spoke Portuguese. Nonetheless, they managed a conversation. For hours they talked all while he was tied to his mast, knife to his throat, gun to his face and “in the mouth and the ear, and also a knife. And I feel that the knife was not sharp, and I was thinking if they start cutting with that knife, it will not be so good!”

Eventually they took what they wanted and left him alone. He wrangled his way out of the ropes and made it to the mainland.

Unharmed and in no way ready to throw in the towel just because of one deadly snake and dangerous pirates, he continued on to the Caribbean and surrounding islands then to Columbia and once again through the Panama Canal in 2014.

At Shelter Bay Marina, at the Caribbean entrance to the Panama Canal, Solfjeld overheard a conversation where a woman asked another tourist if they had ever been in Brockport. They said they had not but Solfjeld was “on the other side of the dock with a Norwegian flag. And I say, ‘I have been there!’”

And that is how the story comes full circle back to a Western New York connection. Peggy Hale, a retired social worker, and Dave Hale a retired professor, were on vacation when they met Solfjeld at Shelter Bay Marina.

“We’re hanging around killing time and Peggy will pick up a conversation with anybody, and that’s exactly what happened. Then it emerged that Harald had been in Brockport and met the Skoogs.”

Like Solfjeld, the Hales have traveled all over the world including China, France, and Norway. These types of “small world” encounters aren’t all that surprising to them.

“These sorts of things happen from time to time so it wasn’t a total shock,” said Dave Hale. “Once we were in Paris, and Peggy was in the process of explaining to somebody from California or somewhere, where Brockport is. And there was a woman overhearing this conversation who was working with another tour group. It turns out her brother and sister in- law owned businesses on Main Street in Brockport.”

After crossing the canal for the second time Solfjeld sailed north to Costa Rica, Nicaragua, El Salvador, Mexico, and Hawaii.

He then proceeded south to Christmas Island, French Polynesia, the Cook Islands, the Tonga Islands, then towards New Zealand. That’s when on November 17, 2017, an unexpected storm rocked the SS-Ilanga and she took on water and lost power. After 24 hours in the wreck a container ship named the Southern Lily came to his rescue. He had to abandon his beloved boat, but he knew he had to make it to safety. He was battered by the Pacific for 45 harrowing minutes before the rescuers were able to pull him aboard. He suffered a few broken ribs but otherwise was relatively unharmed.

“The poor man was so weak he could not crawl up the ladder,” said Lori Skoog of his rescue. “They had to send a guy down with a rope and they dragged him up like a big fish. That man survived at age 67, his boat went down, he’s out in the ocean by himself and he survived. And then when he wrote to me and I started looking up all this stuff and saw the video of them saving him I just about flipped!”

Like everyone else these days Solfjeld stays close to home as the COVID-19 pandemic runs its course. But the memories of his epic trip are ones he will always treasure.

“I was out for seven and a half years and I met so many nice people, and I have so many good memories. It was a beautiful tour.”

As for his friend Lori Skoog, she plans to stay close to Brockport despite Solfjeld’s invitations to visit.

“No traveling. I have chosen to have a life with animals, and so, I stay home,” she said.

But staying home doesn’t bother her as, “somehow we hook up with anybody that is from out of the country that comes to Brockport!”

She also writes a blog that helps her keep in touch with friends from all corners of the globe. “I am able to communicate with people all around the world, because of my journal,” she said.

If you can read Norwegian, Solfjeld’s adventures are outlined in his book Leve en Drøm: Reise Med Vind (Live a Dream: Journey with Wind).

Photo: Harald Solfjeld, a Norwegian national, has been sailing the world for more than 10 years. He recently made a stop in Brockport. Photo by Lori Skoog