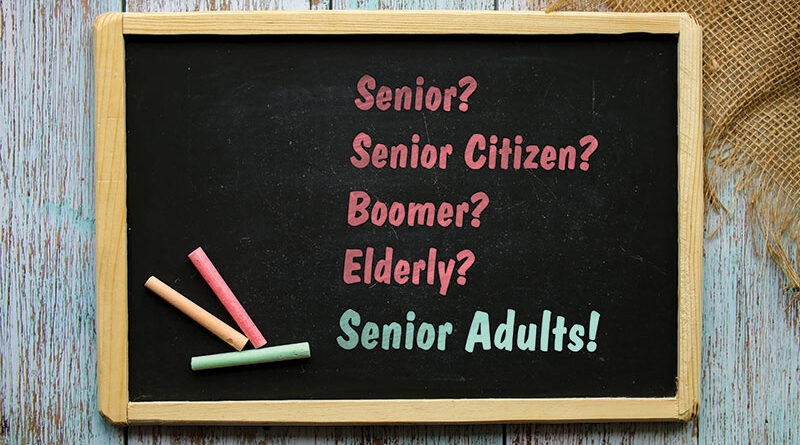 What do most people of a ‘certain age’ wish to be called?

Since you are reading 55 Plus magazine, chances are you are of a “certain age.” What do you like to call your age demographic?

“At Oasis Rochester, we are using ‘senior adults’ as our wording for our participants,” said Ann E. Cunningham, executive director.

“Senior” can denote the top-ranking class—those who have surpassed the freshmen, sophomores and juniors. They are the upperclassmen, the ideal.

“Senior” also represents the most esteemed level of achievement, such as a “senior officer.” It indicates respected tenure. Pairing it with “adult” as “senior adult” lends the idea of a well-accomplished adult.

But “senior” without “adult” can also relate to cheapness, such as someone constantly demanding a “senior discount.” The term is also used disparagingly for someone having a “senior moment” when forgetting something, even though people of all ages can be forgetful.

At Lifespan, Mary Rose McBride, vice president of marketing, said that the organization’s verbiage has shifted from “seniors” to “older adults” a few years ago.

“It was clear to us then, as it is now, that newer generations of older adults think differently about what it means to be 60 and older,” she said. “For the same reason, we never use ‘elderly’ when describing people in their 60s, 70s and even 80s as it denotes frailty.”

Many people in these decades live active lives with few physical limitations. Using “elderly” to describe up to six decades of human age range is as absurd as calling a 17-year-old “infant.” The term does not match the likely abilities and limitations of the typical individual.

“When we see the media describe a 63-year-old car accident victim as ‘elderly,’ we cringe,” McBride said.

Although a small percentage of 17-year-olds are infant-like and some 63-year-olds may have significant frailty issues, most are not. Many of today’s people 55 and older start new businesses, embrace active lifestyles and generally seem more willing to try new things than previous generations at that age. Saddling them with a moniker like “elderly” seems patronizing and inaccurate.

Debra Kostiw, owner of No Place Like Home Senior Care in Henrietta, serves adults who need more help at home. She sticks with “seniors” for the most part, as that is how people search for adult caregivers online.

“They don’t like to be called ‘elderly,’” she added of her clients. “I also call them ‘part of the aging population.’”

By inferring that they are part of a bigger group, the term’s offense is minimal.

Some of her clients have told her that they do not feel valued or listened to by society in general. That impression can extend to the term used to describe their age range. Consider the dismissive “OK, boomer” on social media used by younger people to shut down comments considered out of date.

“Why isn’t age regarded as an achievement and our skills and life lessons as an accomplishment?” Kostiw said. “It’s terrible to feel that no one cares because they think we don’t have anything of value to offer.”

She advises anyone who works with older adults to “make sure that you’re listening. Let them know that they’re valued and you’re listening to them and not disregarding them because of their age.”

As for coming up with a name, she favors inclusivity wherever appropriate.

“You can include yourself: ‘We as an aging population’ or ‘as we age’ or ‘as we become more mature adults,’” she said.

This strategy promotes authenticity, as older age comes to everyone. That is, everyone blessed enough to achieve it.