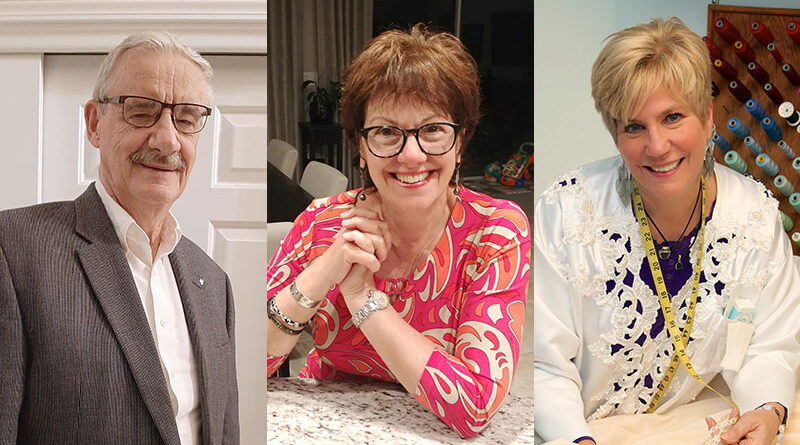 Facing — or maybe regretting — your retirement? Here is what three Rochester area retirees decided to do after retirement

Bob Zinnecker of Penfield had worked in the telecommunications industry 55 years before retiring. A year later, he realized that he missed working. He began consulting with telecom companies — a natural segue for many retiring professionals — but also tried a few new endeavors, such as mentoring at SCORE and writing four Christian novels, “Acquisition” (2011), “Sell Out” (2013), “The Investment” (2016) and “Tolliver” (2019), plus articles and religious devotionals for publication.

He had studied journalism in high school with the ambition of becoming a newspaper reporter someday. Writing came naturally to Zinnecker. However, once he entered the telecom industry, he stayed in it.

Only after he and his wife, Elaine, had reared their four children and after he had retired did he find the time to finally pursue that ambition.

Three years ago, he began to volunteer as a coach for the Small Business Administration.

“I found that to be very rewarding,” he said. “I work with young people who are very enthusiastic. In SCORE, I’ve helped with startups, business planning and nonprofits.”

Whether he is helping someone succeed in business or avoid investing in a business that won’t succeed, he is glad to provide guidance.

He encourages other retirees to be open. “Look around and try to get outside of your natural orbit. If you’ve been vice president and general manager of a manufacturing firm, you’re probably not going to get the exact same position. Use what you’ve learn to help shape an organization. Live a little bit outside yourself in retirement. Don’t settle into the rut of ‘In the good old days, I used to do this.’ This isn’t the good old days. You have to find new ways to use the talents God gave you.”

Angela A. LaVeccia of Rochester jokes that she never could tell what she wanted to be when she grew up. Now 67, her work included civil service, outside sales in the food industry, assisting a broker within the food industry and operating a B&B while raising flowers and flipping houses.

LaVecchia’s wanderlust drew her to Sicily for a vacation. She fell in love with the region and bought a house there. She divided her time between Rochester and Italy, leading small group tours of Sicily and launching an import business that included designer leather bags and silk items. The pandemic has paused her tour group business and the retirement of the designers stalled the import business.

However, she began her most recent venture, working as a franchise consultant for FranNet of Upstate New York, in 2019.

The company represents about 225 franchises within the US and assists potential investors in finding what type of franchise best fits their financial situation and goals. The franchises pay the consultants’ commissions.

“I’m able to guide the potential candidate to three or four franchises based on the information on their assessment,” LaVecchia said. “It’s much the same as a realtor. I have to know their financials. There are minimum and maximum investments within each franchise. I have to know loosely what they have for assets.”

She has enjoyed her zig-zagging career path throughout the years, especially when working independently, where she can “have freedom to follow my instincts and freedom to align with people who are not necessarily likeminded but open,” she said.

She networks and promotes her business through membership in Syracuse-based Women TIES, Rochester Women’s Network, and Builders Exchange of Rochester.

“I’m helping people reach a dream and it makes their heart sing and they want to go do what they’re doing to do whether sun, rain or snow,” she said. “I’m happy doing that.”

Jill Bates, 65, of East Rochester, made an unusual switch from owning Jill Bates Fashion, her own seamstress business, to working for a company. Bates founded her sewing business in 1986. Eventually, she opened a small studio near her home, which she ran for 15 years.

Wanting a change, she closed that business at the end of 2019 and joined her daughter, Jennalee Herb, to work as a realtor at Howard Hanna Real Estate Services in Pittsford. Herb is a licensed associate real estate broker.

“I was getting restless,” Bates said. “I had my real estate license and helped out the team whenever they needed it. I did do a little bit of consulting to other small businesses and other entrepreneurs as I was trying to figure out how to close my sewing business.”

She enjoyed sewing; however, the business administration side became tiresome. Since her daughter had been asking her to help more in the real estate business, it made sense to shift into that role.

“When I turned 60, I knew I needed a career change of some sort and the way I was doing things,” Bates said. “There’s something about turning 60 that you need to prove that you’re not old yet.”

She also completed her first triathlon at age 60 and placed first in her age group.

“It proved to me that no matter what you want to do, you’ll do it,” Bates said.

She encourages anyone transitioning to an encore career to evaluate their transferable skills. Helping customers in the sewing shop often meant reading individuals’ personalities. That skill transferred well to the real estate industry. In addition to shifting her skills from apparel to property sales, Bates improved her networking. She is a member of Women TIES, Rochester Women’s Network, and Rochester chapter of the National Association of Women in Construction.

“It is great to connect with other women and learn about their business and they can learn about mine,” Bates said. “Those three organizations have been very helpful.”

She also thinks that shadowing someone doing what you think you may want to do can help determine if you should take the plunge.