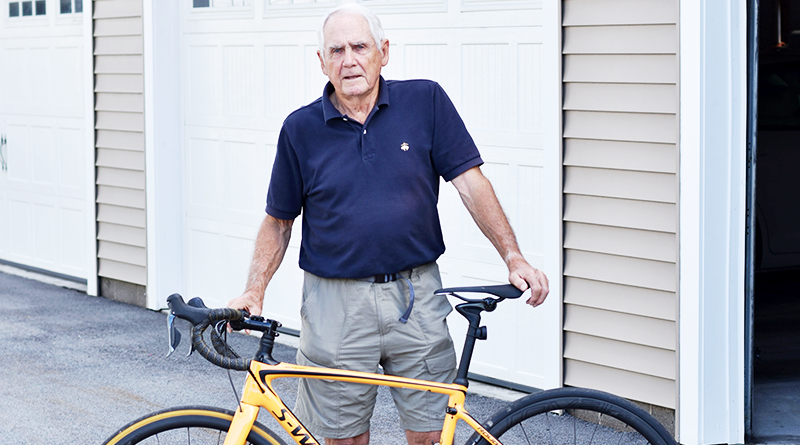 Q: You started out as an avid runner. What makes running fun for you?

A:  I have lived a lot of places in my life. When I was responsible for marketing in Europe and other areas, sometimes I would be so busy from work that I could feel myself not being active enough. You travel all around the world and you eat some good food, but I was definitely losing some conditioning. That is when I decided to take up running. I remember breaking 40 minutes in a 10K and being so excited. It was so cathartic and such a stress reliever. Plus running is inexpensive because all you need is a pair of shoes. I got involved in the Greater Rochester Track Club. Running was something that I enjoyed doing all year long.

Q: What do you enjoy about bike riding?

A: When I started having sciatica back problems from running, then I decided to take up bike riding. It is a great cardiovascular fitness workout. Whether it is running or biking it just feels great to be outdoors. When I am in a car I feel so isolated. But when you bike you feel closer to the world. I enjoy riding with friends. I used to do 100 miles, but when I turned 82, I decided to dial it back and do 100 K instead, which is a little more than 62 miles. I have been an avid bike racer now for more than 20 years and participate annually in the American Diabetes Association Tour de Cure and the MS Society’s ROC the Ride.

Q: Have you ever had a scary moment while bike riding?

A: I consider riding a bike more dangerous than anything I have done and I previously raced cars for some time. I have had a couple of crashes where I walked away and was amazed at how it could have been so much worse. I have a computerized device that can track my speed when I am on a bike. I once hit 52 miles an hour and all of a sudden my bike was wobbling and I don’t think I have ever been that scared in my entire life.

Q: What do you think about when you are riding?

A: Riding is a little more complicated than running. In bike riding, you really have to pay attention to everything you are doing, while running you can just keep going ahead. I like chatting with people as I bike but I don’t like to take a lot of breaks. It is just rejuvenating to just relax and enjoy everything the outdoors has to offer.

Q: What other activities keep you busy?

A: I like to play golf regularly. Last year, I was able to shoot by age which was a 86 at Shadow Lake. But whether I perform well or not, I do like being outside and swinging the club. I also do some downhill skiing. I guess I am just a hyperactive person.

Q: You are also part of an interesting program at St. John Fisher and Nazareth?

A: Yes it is a gerontology program where students interact with seniors to get a meaningful learning experience. It is a unique program that I enjoy because you get to spend quality time with young people. When you are around people who are younger, they inspire you and you do the same for them. You end up talking about relationships, the past, the future and you get a chance to learn so much about each other. You debate ideas and it really makes an impact in both of your lives. Young people have such an interesting worldview and it’s important as we get older that we don’t isolate ourselves from people who are much younger than us.