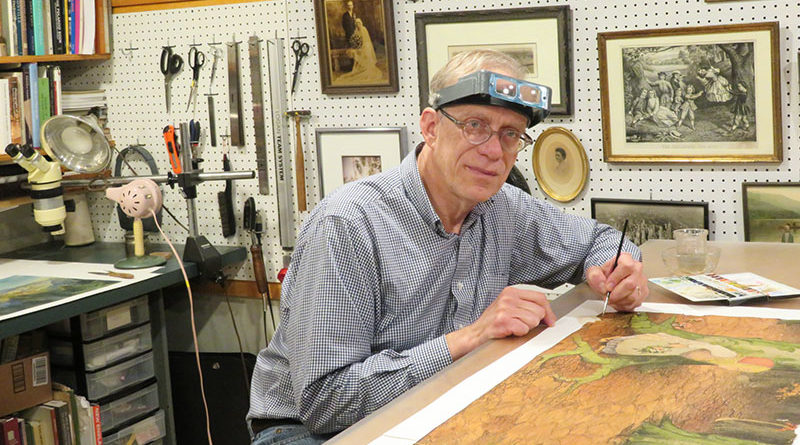 When the Emancipation Proclamation needs repair do you get out the tape and felt tip pen? Of course not. You call Gary E. Albright of Honeoye Falls.

He repairs and restores historical papers and photographs to extend their lives. The most priceless things Albright works on are one of a kind or originals.

Art conservation was not the original career aim of Albright when he was in college. He began as a chemistry student. When he told his professor he wasn’t thrilled with that major, he was guided into courses that combined his love of chemistry, antiques and art history. He was in the second class in the master’s degree program at the Winterthur/University of Delaware program in art conservation.

“The difference between restoration and conservation is the concern that conservators have for the future of the object,” Albright says. “We make it look better now, avoiding procedures that might cause future damage to the object. Also, we do the best we can to make our treatments reversible, so they can be undone by someone in the future if the object needs to be treated again.

Albright says he never considered himself an entrepreneur. “When my job as conservator at the George Eastman Museum ended in 2003, I decided to go out on my own to avoid having to relocate my family. It’s hard to believe I’ve been running my own business for over 16 years. The people I’ve met and the experiences I’ve had have been a pleasure.”

Albright, 66, says that it has been an unwelcome surprise to people who thought they were doing a great job at preserving irreplaceable photos and documents that the very plastic they stored it in breaks down and eats into the paper. Those people have since become some of his customers.

Some of the most famous pieces Albright has worked on include the Emancipation Proclamation and extremely rare Honus Wagner baseball cards. Some of these cards have sold for $2 million at auction. Albright also worked on a photo of Frederick Douglass, thought to be lost forever, and found in the Rochester Central Library local history collections.

Conservation treatment requires a combination of art history, studio art and chemistry. “Would my teachers have anticipated I would have evolved to work on national treasures? Perhaps not,” says Albright. “It requires an amazing amount of patience. It is very exacting work and one cannot rush the process. There are very few people who restore documents, which means I have been steadily busy in my home office in Honeoye Falls.”

Tools of the Trade

To restore documents and works of art, Albright must carefully remove materials that were originally intended to preserve them, but actually contributed to their deterioration. For example, removing tape requires heat and a spatula. Restoring color when those older colors are no longer manufactured demands that Albright custom blend each color and apply it in painstaking detail. To add paper where paper is gone requires making tiny, pin prick dots, to make a pattern for the “new” paper.

“Before treatment, I have to be certain that the client and I understand what his or her expectations are and what is actually possible. One client had a classic Garry Winogrand black and white photo. It was so faded there was concern that the image might disappear. I described to him an experimental process, and its risks. I would completely bleach out the image making it invisible, and then expose it to light and virtually redevelop it. It worked, fortunately, but it doesn’t always.”

The job that he still remembers is the Emancipation Proclamation. “It has been a privilege, and a rush, to work on the Emancipation Proclamation. And to treat the letter of George Washington to Col. Wade, informing him that Benedict Arnold had gone over to the enemy. It gave me the chills. I also have worked on two written drafts of the US Constitution, and I’ve seen the notes in the margins of the reviewers. These are amazing materials.  These are the documents that shaped our history.”

In addition to artifacts of historical significance there are the pieces that have touched his heart, because of their importance to a person or family.

“I have restored many family photographs for people, cleaning them and making them exhibitable. One family had a special, paper Christmas angel that topped their tree, that had been passed down for generations. Of course, it was damaged. Their look of delight and appreciation when I was able to repair it for them was very gratifying to me,” says Albright .

Loving his Work and his Life

His wife Lynn readily acknowledges that Albright can get lost in a project and spend hours in his studio, but he does have other interests. In the winter he cross country skis every chance he gets. He collects photos to share with his students in conservation and preservation. He reads almost everything including sci-fi and Newbery award winners in children’s literature, and theology.

“That’s one advantage of being self-employed. I can decide when I want to work on a project.” He also plays piano for his church and is a trustee for the local historical society.

If you’re thinking about passing along family photos and documents to your family, a few things to remember to preserve your photographs include:

– Cooler and dryer is better.

– Keep the relative humidly below 60%.

– Avoid storing in basements and attics.

– If you are relocating, spend a few dollars on storage bins and bubble-wrap your photos. Cardboard boxes are too vulnerable to weather and being crushed.

– Exhibit copies, whenever possible, to preserve the originals.

– Ink fades, so if you think someone will want to read your journals, invest in ink known for its permanence.

– Don’t spray glass cleaner on the photo’s glass – it can seep into the frame and ruin the photographic paper.