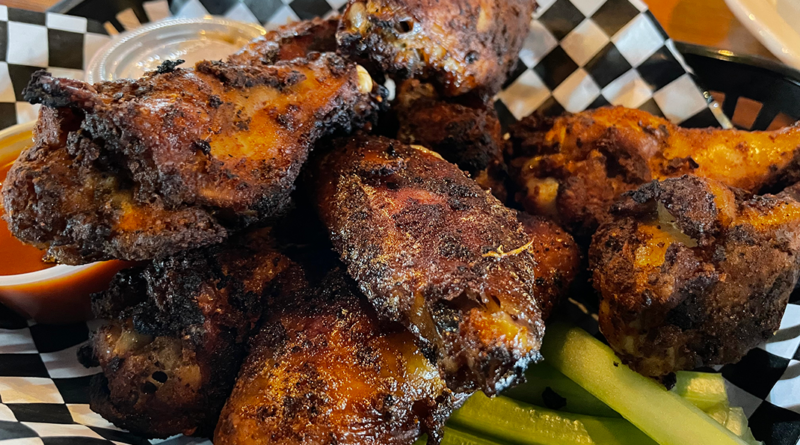 Taking a bird’s eye view of Smokin’ Eagle BBQ & Brew, the simplicity of the joint is deceiving.

Aside from the pronounced sign hanging outside on the brick-walled building, the guts take a more modest approach.

The Le Roy establishment’s appeal is that of a neighborhood bar, which some may take as my dancing around calling it a dive.

What it boils down to: It’s a comfortable and clean place. The brick interior, the dark furnishings and the aroma of barbecue can cool down your mind on a hot day and warm you up on the colder days.

Aside from the name of the place giving away its specialties — or if it was named anything else — the commoner wouldn’t know it was a barbecue joint or microbrewery, Rogers Beer Company.

They place posts sparingly on social media, too. After my visit, I’m confident to call it a hidden gem.

The former hotel — the Eagle Hotel — in a building with a 200-plus year history got a new look on life about a decade ago and it’s cooking literally and figuratively.

I kicked off the meal with trying a sample of Roger’s Labrador double chocolate porter, but got a pint of their Hound Scotch ale (only $5.75) because it was less high-test compared to the porter, the Mutt double IPA, and because the (Pug) blueberry fruit beer isn’t at the top of my list. The Scotch ale had a great malty and caramel flavor to it. Typically the variety has a slight boozy character, but this one was on the subtle side.

Aside from a variety of their options, Smokin’ Eagle has a stocked bar with various craft and domestic beer, plus liquor and wine.

Instead of an appetizer, the hickory smoked wings ($16) sounded absolutely delicious. To go along with the handhelds, the dipping sauce of my choosing was the hot garlic sauce. The garlic-forward concoction with a slight kick was a wise choice. Along with the smoked wings, the flavors didn’t clash.

The smoked wings themselves without sauce were wonderful. The char-broiled singed, smoky chicken fell off the bone easily with each bite and the meat was far from dry. The wings aren’t small either. Although 10 come in an order, I didn’t feel duped or shorted.

As an entrée sitting with other chef favorites, the Memphis mac and cheese ($18) grabbed my attention. This adult version of the kid staple adds pulled pork and panko crumbs into the mix, which is topped off in a four-cheese sauce. Hoping to skirt around getting the entire entrée, there were no smaller versions.

The huge, easily shareable (highly recommended) entrée is completely unhealthy, but totally worth it. The flavor from the cheese (and butter) sauce, garlic, the pork and overall smokiness did not disappoint. Each bite was addicting. Saying “just one more bite” only led to more.

The “Q for Two” plate ($42) featured a half-rack of ribs, a half chicken, a half-pound beef brisket, a half-pound of pulled pork, two pieces of cornbread, a double order of baked apples — insert breath — and two sides. I opted for home fries and coleslaw.

The coleslaw was your standard cabbage-based concoction and the incredible mound of crispy home fries could satisfy an entire family.

The warm baked apples boasted a slight sweetness and the cornbread were standard-sized cakey versions of the barbecue compliment.

Let’s get to the meat. Although it was flavorful, I enjoyed the brisket the least. Unfortunately, it was slightly dry despite the sauce. The pulled pork, on the other hand, was not as dry. The cup of barbecue sauce that came with the platter made the pork even better.

Similar to the wings, it fell off the bone. The rub had great flavor with a very subtle kick. The ribs also fell off the bone. It didn’t take much effort the pull the ribs bones off one by one, with various amounts of meat coming with each.

Before tip, the meal came to $76. For the amount of food, there were certainly leftovers, which I shared with my lovely wife.

There’s no doubt I’d return to Le Roy for more barbecue at Smokin’ Eagle. The staff and other patrons are friendly and are wonderful to chat with.

This attests to the comfortable atmosphere, feeling right at home in a new place.
And Roger’s beer is available for takeaway. You have to bring your own growler or reuseable bottle. Prices will vary depending on the style of beer and size of container you have.