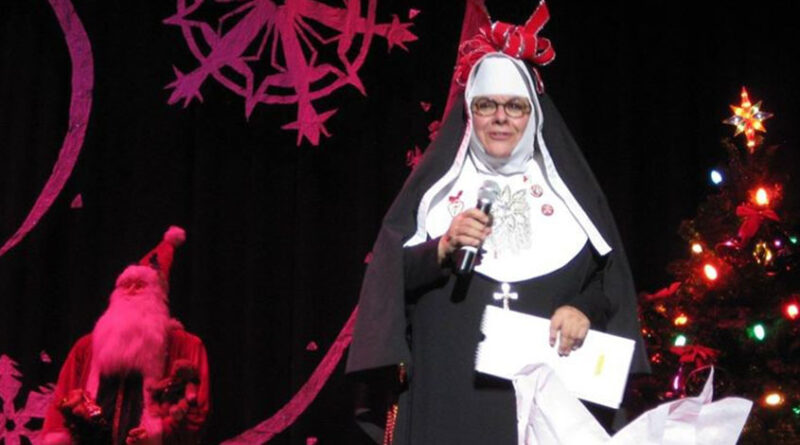 Still hysterical and compelling at 75. She’s scheduled to present a show in Orlando in February

She has been called naughty and hopelessly irreverent. At age 75, comedian Phyl Contestable is still hysterical and compelling as Reverend Mother. When she won the audition in 1985, she sailed past 200 applicants and into a career that is still thriving.

They all agree people need to laugh and lighten up. Contestable has put a new blush on wedding couples, anniversary celebrants, retirees, birthday honorees and office staff. If you end up as a “victim,” hold onto your middle and buckle your seatbelt for a fun ride.

“It began in 1986 when “Nunsense” was scheduled to premiere on the road in Rochester. My friend and musical director insisted I audition for the part of Reverend Mother,” she said.

Contestable was a Sister of Mercy for six years, vows and all, so of course she knew the character intimately. The director saw her flesh out the Reverend Mother persona more realistically than anyone else. The character “business” (mannerisms, gestures, and verbal inflections) was so authentic that no professional actress would have had a handle on any of that, he said. He was amused and excited.

“I had patterned myself in this role after my real Reverend Mother from the order to which I had belonged,” Contestable explained.

Phyl earned her Equity card even though she didn’t need it because she had a teaching career with all the benefits. The other New York women weren’t too thrilled with her indifference to being Equity. “They worked very hard to acquire that status and it didn’t seem fair to them. However, the show must go on and we worked it out,” she said.

Her elementary students (Catholic school K-8) didn’t realize their teacher was” famous.” She never brought that world into the classroom. Eventually the Rochester diocese became an integral part of the show’s success. The production ran for three years and became the longest running musical in Rochester history at the Downstairs Cabaret.

Contestable knew many people in the community. Before the show, she would scan the audience list and then prepare to single out and pick on individuals as part of the first act. This included the bishop in his turtleneck sweater, the mayor, her lawyer, dentist and school administrators public and private. She did an impromptu Pap smear routine when she saw her own primary care physician in the audience. No one was excused from the Reverend Mother.

Studying comic mentors made her spontaneity easier. Comic legends: Robin Williams, Danny Kaye and Carol Burnett all became part of the Reverend Mother’s quick wit. Some of her favorite roasts include:

A prominent Rochester multi-millionaire whom she learned had a history of dancing in his sister’s tutu and tap shoes when he was a young boy. Dancing in front of a full-length bedroom mirror, he dreamt of becoming another Gene Kelly.

Bob Douglas was turning 60, so his wife contacted Contestable to roast him for his birthday. She provided Phyl with his biographical background, mentioning his six siblings. She also told Phyl that his younger brother was a 43-year-old Hollywood actor. “I said to myself, Michael Douglas? No, that’s too young. Couldn’t be this Michael but I made a note of this coincidence and showed up at the event. The club manager casually mentioned that Batman and the “Bettlejuice” guy was in the dining room. Michael Keaton? No one had told me. He played along and remarked that I reminded him of his sixth-grade teacher, a Franciscan nun. Reverend Mother was a big hit and I posed for many pictures,” she said.

Contestable recalled another time when laughter was indeed the best medicine. She was asked by an audience member to visit his grandmother hoping it would ease her depression. The grandmother was a “Nunsense” groupie. Phyl surprised Gladys in her kitchen. She was stunned. After Reverend Mother left, Gladys began to call her friends to tell them “The nun was here! The nun from the show!” Her doctor could not believe her recovery.

“The COVID isolation gifted me with time to evaluate and examine my life’s journey, a new philosophy and how to move forward. Profound lessons learned! I’d do it all over again!” she said.

“I am beyond excited to meet Floridians and snowbirds from this area. I know it will be an amazing experience for me,” she said. “Happy 2022 everyone. LARD have mercy on us all!”