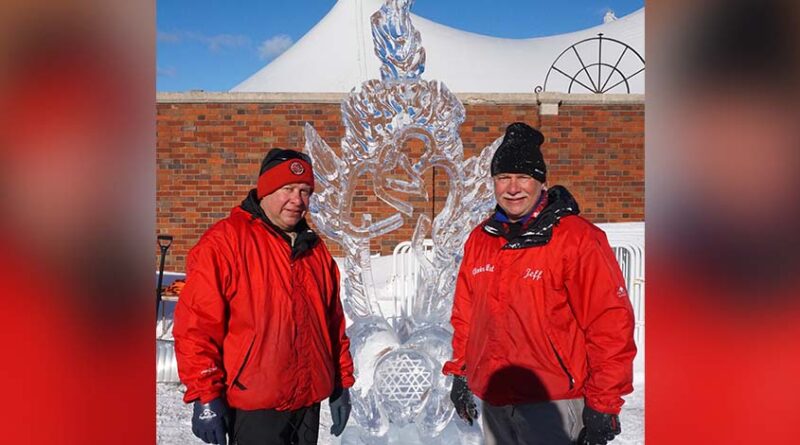 More than three decades after creating his first sculpture, Jeff Bleier still enjoys turning a block of ice into a work of art.

“The end result is something that’s crystal clear and spectacular,” said the 58-year-old professional ice sculptor and founder of the company Glacier Art.

Jeff Bleier and his brother, Tim, were at Rochester’s Ontario Beach Park on Feb. 5, creating two pieces for the annual Lakeside Winterfest Celebration, while the thermometer stayed well below freezing. One was a thick bench of ice that was just right for photo ops. The other was the striking sculpture “Infinity Power of Love.”

Like all of Bleier’s sculptures, the gleaming, winged “Infinity Power of Love” was a creation of his own design. The West Henrietta resident’s ice sculptures have won awards in competitions around the country, including one that was held in conjunction with the 2002 Olympics.

Bleier gained his first opportunity to shape ice into art while in his mid-20s and working for a now-defunct Henrietta hotel. The hotel featured ice sculptures with its Sunday brunch buffets, but an injury had left its regular sculptor unable to carve.

Management put out a call for volunteers and Bleier, who was studying graphic arts and design at Monroe Community College, saw his chance.

Jeff soon realized he could do more than buffets and began entering ice sculpture competitions. His brother started coming with him just to help out, but eventually began to enjoy ice carving, especially two of its elements.

“The opportunity to use different power tools and express your artistic opinion, and the fact that it (the sculpture) melts and goes away,” the Hilton resident said. “No one can ever duplicate it,”

After about eight years of sculpting as a hobby, Jeff Bleier founded Glacier Art. Since then, the one-man company’s crystalline works have graced weddings, company celebrations and other events around the Rochester area.

For a professional like Bleier, ice sculpting involves a great deal of equipment and effort. The process begins in his garage, where three ice making machines equipped with circulating pumps freeze tap water into large, clear blocks.

“Without the circulating pumps they would turn white, because the water has to be moving as it freezes” he explained.

Once the blocks have formed, he pulls them out of the molds with a chain hoist, trims any impurities off their surfaces and trucks them to the walk-in freezer at the Caledonia Village Inn. In addition to being an ice sculptor, Bleier co-owns the Caledonia, New York restaurant with his wife, Lisa, and is its executive chef.

The blocks stay in the cooler for a day and then undergo a tempering process that leaves them in a condition to be used.

Once the blocks are ready, Bleier goes to work with his electric chain saws and grinders, hand chisels and other sculpting tools.

After he’s finished carving a piece, he uses a propane torch to melt away ice dust and flakes. The heat treatment gives the surface of the piece a lustrous, clear sheen.

In addition to doing paid gigs, Bleier has entered sculpting competitions around the US. In about 1990, he and his brother headed to the now-defunct Trump Plaza hotel and casino in Atlantic City for a National Ice Carving Association national championship. Jeff Bleier took first prize for his carving of Pegasus and a fairy.

“Pegasus was flying,” Bleier said. “There was a fairy attached by the mane…off to the side of the horse’s neck.”

Tim submitted a work of his own, taking first place in the amateur division and an award for the most creative sculpture.

“It was a Chesapeake Bay retriever with a duck in his mouth with some cattails,” he said.

In 2002, Jeff and Tim headed to Salt Lake City, Utah. There, they vied with 29 other two-person teams in a national ice sculpting competition that was held in conjunction with the Winter Olympics.

Working flat out for 36 hours, the brothers turned 10 large blocks of ice into a 15-foot-tall sculpture with a “Wizard of Oz” theme.

Called “No Place Like Home,” the piece featured Dorothy atop a twister holding her dog, Toto, and pouring water on the Wicked Witch of the West.

Ice sculpting can be a lot of fun. It doesn’t necessarily pay the bills. Bleier spent many years working as an executive chef for Rochester-area hotels before acquiring the Caledonia Village Inn with his wife. His brother Tim is the founder and owner of Exact Machining & Manufacturing, Inc., a local firm. Both men are married fathers. Bleier also has a stepchild.

Featured image: Jeff Bleier, on the right, and his brother Tim flank their shining creation at Ontario Beach Park. Set against its harsh surroundings, the finished Infinity Power of Love appears ready to take wing.