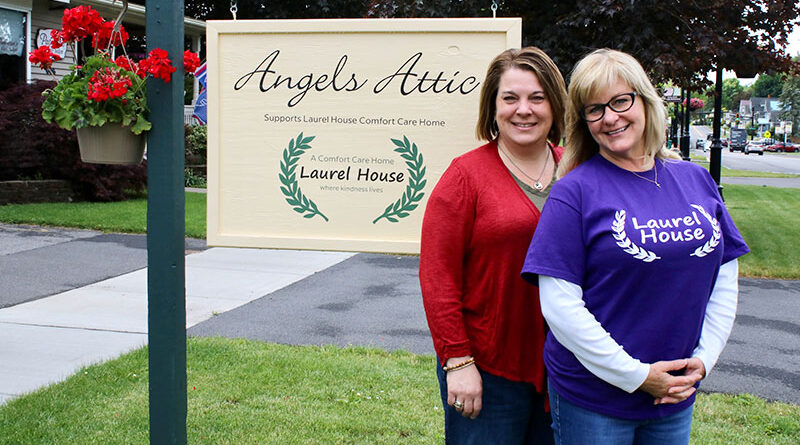 This is such a good outlet for a lot of people,” she said. “This is where it makes my heart full. There are just so many people who want to see Laurel House succeed and want us to help others.”

Laci Graham was sitting in the living room of Laurel House, a comfort care home in Newark that takes care of those who are in their last days on earth. All of Laurel House’s services are free. Graham is the executive director.

There are two beds in the home and one of them was occupied by a resident who asked to have her room rearranged so she could watch the birds at the feeders and the deer and turkeys in the fields beyond.

Graham spoke about how volunteers and community members started a fundraising adjunct last fall after COVID-19 had closed down Laurel House’s major fundraisers and the donations needed to keep the house open were at a trickle.

“With our fundraising diminished, we needed to come up with some new efforts,” Graham explained. “Another comfort care home has used a charity reseller store. They told us their store had supplied funds to their budget for many years. So, we started brainstorming.”

One of the first people who loved the idea of a second-hand store was Sue Edwards, who had a similar small store in Newark.

“She loves to recreate second-hand items, loves to decorate and has an artsy eye,” Graham said.

“Laci and I were talking,” Edwards remembered. “I said, ‘You know, there are other places that have little stores that help make money for their cause. We should think of doing something like that.’ We got our heads together and she started doing research and I started doing my thing, but it was a slow start, believe me.”

Graham and Edwards enlisted Gayle Addyman, who had run a very successful and huge rummage sale for St. Michael’s Catholic Church in the midst of the pandemic. And Graham took the collective ideas to the Laurel House board of directors.

“When I first went to the board president, Gene Palmer, in May 2020, he thought it was a great idea,” Graham said. “We thought we could become another asset to Newark and Wayne County, provide another type of service, so to speak. We presented it to the board and initially, the first board meeting was – yes, let’s go ahead and do this.”

But Palmer became ill and died. The board changed composition and for months, the store idea was sidelined while COVID-19 ravaged Upstate New York.

Yet Laurel House was open.

“We were open with one resident,” Graham said. “We were doing OK with the number of volunteers. We were one of the few comfort care homes that was open. Some thought we were kind of living in a fantasy world for our volunteers, who were escaping the rest of the world by coming here, to a place that was safe and a place to do service. Of any place you could go, this was pretty safe with all of the COVID restrictions we had in place. When we started to talk a little more about the store, I think our volunteers were excited about starting something new, another way Laurel House could support the community.

“One of the things that triggered this store also was the many phone calls we received offering household donations. People knew Laurel House needed a lot of items to get going and they continued to call and call. I was turning a lot of things down because we didn’t have room to store them. That prompted me to want the store even more, to take all these donations and turn them into funds we really needed.”

The board finally OK’d the store project in November. Edwards and Sandy Marcano, another volunteer, swung immediately into action. 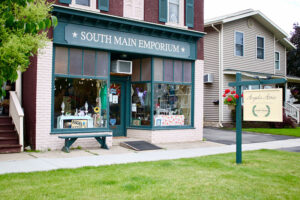 “I started hauling stuff in and moving things around,” Edwards said. “In the beginning, Laci was bringing stuff to me. Sandy was my right-hand person; she was helping me move the furniture and setting things up.”

Using the experience Edwards and Addyman had in what would sell and what wouldn’t, “our opening philosophy was a second-hand gift shop. We didn’t want to get into clothes and shoes,” Edwards said. “We wanted good second-hand home goods and gift items, small appliances, small furniture items, kitchen bowls, decorative stuff, jewelry.”

The weekend before Christmas, the store had a special opening for kids.

“We had a tree in the window. We had a special shopping day so kids could buy things for their families, their parents, their siblings,” Edwards said. “We rearranged the store to help kids pick out things and it went very well, oh my gosh! It was a hit. We had a lot of kids.”

Most of the volunteers at the store were also caregiving volunteers at Laurel House and that eventually created an issue Graham had to address.

“One day, by chance, two volunteer friends were talking in the store,” she explained. “One had just left Laurel House to go down to the store to work and her friend at the store had asked, ‘How is our lady resident doing?’ Ironically, there was someone in the store who knew that resident at Laurel House. She never said anything but heard what our two volunteers were saying. There was no detrimental information given, but the conversation shouldn’t have been shared with anyone in public. At that point, we had to make a decision on confidentiality.”

Graham told each volunteer they had to make a choice, work at Laurel House as a caregiver, or work at Angels Attic. Not both.

“My heart was here in Laurel House,” Edwards said. “I had done what I set out to do. The store was open, working and making money.”

She left the store and remained a caregiver.

Graham tapped two new co-champions for the store, Gina Bement and Yvonne Mac Taggart, who had known each other since fifth grade at the old St. Michael’s School.

“She is a wonderful support for all of us,” said Mac Taggart. “She has done a great categorization of the store. Everything is organized.”

A hairdresser from a long family line of women who have made people pretty, Bement got introduced to the hospice environment at House of John in Phelps, where she was called to do a resident’s hair.

“That changed me,” she said. “Then I went to Laurel House to do hair and I fell in love with the place. My grandmother became ill and I became the person on the other end of that care. To watch someone you care very much about suffer needlessly, and then to see what a gift Laurel House is, or any hospice home, but especially this one.

“I always told Laci, if there’s ever anything you need…I was here the first day of the store, unpacking boxes with Sue Edwards. Since then, all I’ve done is try to support this. I don’t want to lose this store because it takes away some of the financial stress of taking care of residents and their families.”

Mac Taggart does the scheduling for volunteers.

“We have a diverse group of volunteers, many lucky enough to be retired and supporting the community in many other ways: their schedules are already full but they find plenty of time to help us out,” she said. “Angels Attic is such a gift to the community. I love coming here. I come in with my heart full and a smile on my face. I love the people. I love to talk to them, help them and watch what they find to be a treasure. I know I’ve helped them and helped Laurel House.”

Bement spoke about the regular customers who stop in every week, the people who line up Thursday morning to see what’s new in the store, she emphasized that the inventory changes every day. As a business owner in the community, she also talks up Laurel House.

“You don’t know how much you need a comfort care home until you need it. Words can’t always get through. Everybody likes to help others. There are other second-hand stores in this town that draw people who like to do that kind of shopping. I think because we are a nonprofit, that alone makes people comfortable about donating items that belonged to their grandmother. We take pride in keeping things clean and priced low so someone else can enjoy them. That’s always been our priority,” she said.

“I think there are just so many people who want to see us succeed and want to help us to help others,” said Graham. “Even though they may not be able to volunteer, just by dropping off items or shopping in the store, or supporting one of the Laure House fundraisers, they feel they are part of our mission, and they are helping us. I think people really feel good about shopping, buying, donating and supporting us at Angels Attic. It has created a little piece of our community where there’s a lot of talk about it. It’s brought a lot of people together. For our volunteers, people who typically wouldn’t necessarily have congregated in certain circles are now doing that because they’re working together here at Laurel House or at the store. It’s such a good outlet for a lot of people.”

Photo: Yvonne Mac Taggart And Gina Bement have known each other since they were in fifth grade together at the old St. Michael’s School. Together they manage the Angels Attic second-hand gift shop on South Main Street in Newark. The store is a fundraiser for Laurel House Comfort Care Home.