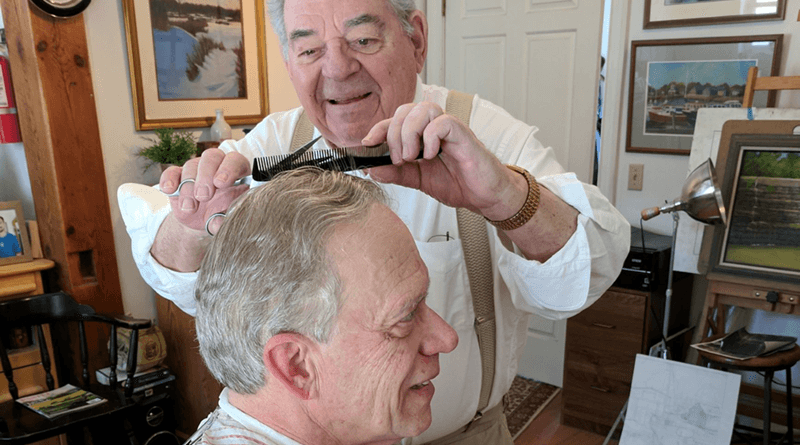 Pride of Honeoye Falls is cut above the rest

Walking into Henry Besanceney’s “barber shop” is like walking into no other place where men gather for a haircut.

At 83, Henry’s personality shines through the décor and mirrors his personality. Oriental carpets, books on wine, his original art, and jazz playing in the background set a welcoming atmosphere.

Antiques take the place of traditional glossy floors and sinks. An overstuffed sofa and rocking chairs suggest that more than a snip and cut have kept customers coming to his shop in Honeoye Falls for decades. His customers love the atmosphere and hold deep affection and respect for their barber.

How has life played out for this multi-talented man?

Besanceney says much of his life occurred by chance. After serving stateside in the U.S. Marine Corps at the end of the Korean War, Besanceney returned home to southern Ohio where jobs were in short supply. An off-hand mention of employment opportunities in the Rochester area by relatives in Hemlock ultimately brought the young veteran to Honeoye Falls.

He soon had his eye on a girl named Shirley who worked at a local restaurant he frequented.

When Shirley seemed uninterested, a friend said to her, “Give the guy a break, go out with him.” Reluctantly, she agreed. They have been married for more than 60 years.

Not one to let an opportunity for a joke slide by, he says they had three kids, “one of each.” They have five grandkids and keeping in touch with them through their preferred medium is why Besanceney learned to text.

Shirley’s father, Joe Mamoone, was a barber and suggested Besanceney receive training to work with him at the barbershop. “I tried it and liked it. My father-in-law and I were in business together for 25 years. We spent a great deal of free time together hunting and fishing or going to his camp in the Adirondacks. He was really a father to me, not just a father-in-law,” Besanceney reminisces.

Many of Besanceney’s clients have been with him for decades and three generations. Some who started out in a booster chair are grandfathers today.

When Rochester was a hub of industry, frequent customers were CEOs and executives. Colby Chandler (CEO of Eastman Kodak in the ‘80s) was a customer. He and Besanceney shared gardening strategies along with opinions on art and music. Richard “Skip” LeFauve, who held high-level executive positions at General Motors, also was a customer. “Both being military veterans, we covered the world in our conversation,” says Besanceney.

One customer who changed Besanceney’s view of the world had been a navigator on a bomber in World War II and later became a priest and educator. Besanceney always booked the priest for an hour because he knew they would continue to discuss philosophy, history, art and religion long after the haircut was finished.

Gary Albright has been a customer of Besanceney’s for decades. “It’s always a good experience to have a haircut by Henry,” Albright said. “How many other barbers can talk intelligently to you about wine, jazz, and art? Personally, I know nothing about wine, but I do enjoy the music and art. Frequently, I find myself discussing Henry’s pastels, viewing his art books, and sharing museum experiences.”

Besanceney felt that with French ancestry, he should learn the language, and he set about to do just that. He says he is a better reader of the language than a fluent speaker but could speak “traveler’s French” when he and his wife traveled to France.

“When we went to Europe, we always stayed in small towns and away from the large cities. I felt I learned so much more about the true culture by staying in bed and breakfast homes and small hotels,” he said.

He also took this opportunity to investigate his own genealogy by reading old records and original documents, all written in French. He traced his lineage back to 1609.

One of his favorite places to travel is Quebec Province. Quebec City offers a taste of France, and Montreal is the site of the highly regarded International Exposition of the Societe’ de Pastel de l’Est du Canada (Pastel Society of Eastern Canada).

Although he has won many awards in local art and pastel shows, Besanceney is most proud of having his works chosen for exhibit in the Société’s juried International Exposition each of the three years he submitted his work.

A history buff, Besanceney has studied local history. He loves the small-town atmosphere of Honeoye Falls and has served on the planning and zoning boards in the village for two decades. His earnest desire is to help the town grow but also to preserve the sense of neighborhood that draws people to the village.

Honeoye Falls Mayor Rick Milne says of Besanceney, “Henry Besanceney is a dedicated village resident and business owner who just happens to do some painting on the side. Henry has been a key contributor to our community from a service standpoint and brought a sensible demeanor to our Zoning Board of Appeals as chairperson. I believe those that came before the ZBA always knew that Henry wanted to do what was right for the village and also wanted to support the needs of the person or client before the board. People like Henry Besanceney are what make small villages great places to live and work.”

In this third stage of life, Besanceney feels like a man of riches between his family, friends and customers and good health to practice all of his crafts. He rides a tricycle through town in the summer, despite knee and ankle issues. In between customers, he recreates nature through his art and listens to music with a special love for works from the ‘40s and ‘50s.

His one rule? “Never nap in the shop.”

No matter when he’s asked about retirement, the answer is always the same: “Um, I’ll give it another year.” Anyone who knows him would agree that this man never slows down.