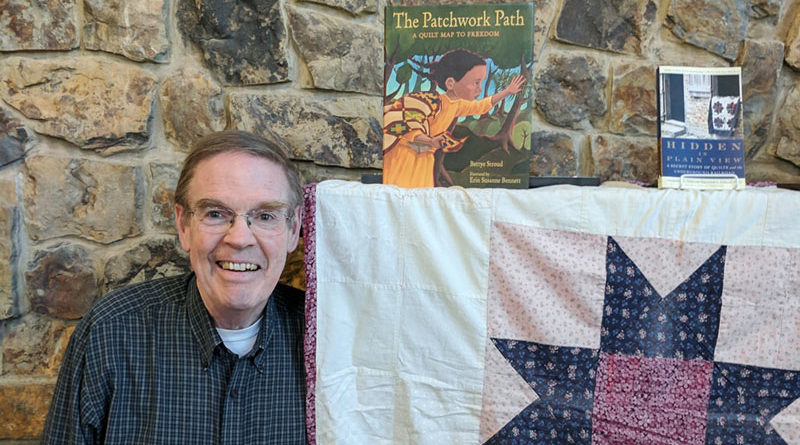 Not necessarily underground, and not actually a railroad

Jerry Bennett is one of the area’s frequently sought-out speakers on the Underground Railroad.

He averages 12 to 15 talks annually at places such as Susan B. Anthony House, Rochester Museum and Science Center, historical societies, area schools, senior clubs, community and recreation centers, and libraries.

Among several things, Bennett attributes his initial interest in the Underground Railroad to attending the old red brick St. Louis Elementary School in Pittsford — the former Hargous House and a stop on the “railroad” — and being shown the hidden cavern used by runaways.

Also acting as a catalyst for his interest is support and encouragement from his daughter Erin,  who  illustrated two children’s books from the slavery period, “Patchwork Path” and “Hush Harbor.” He shared those works with fourth- and fifth-graders in schools.

In addition, reading Mark Twain’s “The Adventures of Huckleberry Finn” and the runaway slave Jim, and remembering family stories about his grandmother’s exchange of notes with Samuel Clemens spurred his interest.

He also discovered that his great-grandfather, Daniel Pratt, was an active abolitionist in Elmira.

Since the early 2000s while visiting family in the South, Bennett and his wife Linda gleaned additional details that he has added to his repertoire, including little-known facts.

These include Levi Coffin, a white Quaker in North Carolina known as the president of the Underground Railroad, who helped slaves flee to both Ohio and Indiana. Frederick Douglass (born Fred Bailey), an escaped slave who eventually settled in Rochester, was a famous orator who spoke against the evils of slavery. He was a “stationmaster” who helped slaves escape to freedom in the North.

Also relatively unnoticed is William Still, a freed black man in Philadelphia, who kept a secret journal of all runaways seeking help from the Anti-Slavery Society.

Women also were actively involved in the anti-slavery movement. Susan B. Anthony not only lobbied for women’s rights, but also the abolishment of slavery. Harriet Tubman walked from Maryland to Pennsylvania to secure her freedom. She then risked her life again by returning to the South close to a dozen times to free various members of her family and was one of the most famous conductors of the railroad.

A conductor, a person of any color, helped runaway slaves move from one station to another. Regardless of race, if a conductor was caught, he could be severely punished or killed — not to mention the runaways (freedom seekers) who were often subjected to severe beatings.

Sojourner Truth (born Isabella), a slave on a Dutch plantation in New York’s Hudson River area, was sold three times; her son was illegally sold. She walked to freedom, and with the help of her literate friend, Olive Gilbert, published a set of memoirs titled, “The Narrative of Sojourner Truth: A Northern Slave.”

Truth was the first black woman to file and win a lawsuit against a white man in an American court and was reunited with her son.

For as many famous people as we can name, there were hundreds of unknown people involved in the network of safe houses traveled by fugitive slaves. While the term “railroad” makes people think of some orderly, well-established route, author Eric Foner reports that it was a series of small networks not particularly well-organized. Safe homes were about 12 to 15 miles apart — the average distance a runaway could maneuver at night while on the run. Ship captains also helped stowaway slaves reach the North. Douglass traveled by ship using forged seaman’s papers.

They had very little food and no medicine, likely walked or ran on bare feet, and had no weapons to protect themselves from humans or bloodhounds, often with a bounty for their capture. And if they did reach a free state, the danger did not end there. The Fugitive Slave Law of 1850 viewed escaped slaves as stolen property rather than people and encouraged — even coerced — the recapture of fugitive slaves.

Both abolitionists and freed blacks played a critical role in the escape process. Canada became “Canaan land” and freedom.

According to Bennett, the U.S. Navy caught Jonathan Walker, abolitionist and ship captain, smuggling slaves from Florida toward Jamaica (the British Empire having already abolished slavery).  The slaves were returned, and Walker was fined, jailed, and branded (with “SS” for slave stealer) — the only American to be treated in such a manner.

In 2019, Jerry and Linda Bennett visited the John Rankin house in Ripley, Ohio, high up on Liberty Hill overlooking Kentucky, the main streets of Ripley, and the Ohio River. Rankin was one of the most active conductors on the Underground Railroad.

Where it all happened

One of the nearly 2,000 freedom seekers assisted by Rankin and his family, a woman called only Eliza, crossed the icy Ohio River with her baby held high. Her desperate race to freedom was retold to the Rankins and to a visiting friend — Harriet Beecher Stowe. She included Eliza’s story in her book “Uncle Tom’s Cabin,” published in 1852. It chronicled the horrors of slavery using stories and vignettes. Because some thought her work was fiction, in 1854 she released her source notes, “Key to Uncle Tom’s Cabin,” and proved to the disbelieving, that slavery and its horrors did exist.

Many people are surprised by the story behind “Amazing Grace,” a well-known anthem of the civil rights movement.

John Newton penned this hymn in the late 1770’s while a pastor at a church in Olney, England. But his “wretched life’ was patterned after his previous job, a slave ship crewman and captain, working the slave triangle from England to West Africa to the Americas.  Later, he supported member of Parliament and ardent abolitionist, William Wilberforce, as an eyewitness in his quest to abolish slavery across the British Empire, says Bennett.

Bennett spends many evenings and weekends prepping and giving talks to the community. “I may be giving the talk, but it is really a conversation between those of us who have gathered different resources. It is a sharing of knowledge and it’s a true story that needs to be told, retold, and kept alive,” he said.

For more information or to schedule a presentation, Bennett may be reached at jprevention@earthlink.net.

Photo: Jerry Bennett explains that slaves used quilts as coded maps as they fled the plantation in search of freedom up north. The wagon wheel, for example, meant “get ready to travel”; the log cabin was a safe place; the bow tie was a clue to get dressed up and look ‘free.’ Controversy exists over the existence of these quilts.