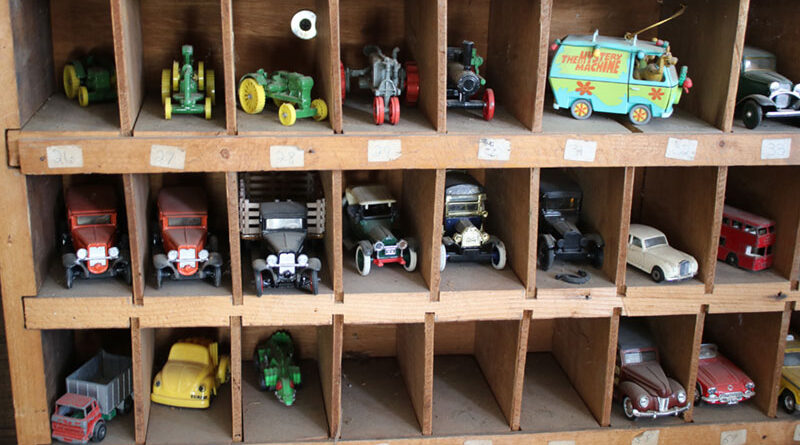 A collection of diecast cars can look great on a mantle or bookshelf…or absorb your basement.

Models available today resulting from new technologies are wondrous to look at. Hoods and doors open, wheels turn and a model in the proper scale can bring back a lot of memories.

Some models just feel right in your hands. Some put a smile on your face every time you look at them and remember pulling that car out for a Sunday drive when you owned one…the MGA your mother’s friend was nice enough to let you drive for the afternoon…the Mustang GT you spent an hour laying patches of rubber in…the Miata roadster you took to college in your senior year…the Maserati Bora you always wanted to own because it was so beautiful.

There are lots of reasons to think about collecting diecast cars.

Let’s see where you fall…

“99% of my clientele is male,” said Theobald. “There are some women who are very knowledgeable who do collect die-cast cars, but for the most part, wives do not accompany their husbands into the store.”

Maybe that’s because when men stop in Theobald’s store, they’re on site for two to three hours, on average.

Second, you are probably the perfect age as a reader of 55 Plus magazine.

“There used to be a few kids who would come into my shop,” said Keith Stell, who owns Bench Racing Diecast & Collectibles in Newark. “Today, there aren’t a lot of die-cast shops around; there used to be four of us in the area: many have closed their doors. I haven’t seen a young customer lately.”

Theobald says half of his customers won’t use a computer. He will do a search for them and if he can locate a model on the web, he’ll refer that site to the buyer, suggesting the customer confer with a grandchild or wife to put through the order online. “I love to do searches for people — a quarter of my time is doing searches to find out if a car is available, and in the right color.” Sometimes that car is in his shop.

Stell’s store is open limited hours, but his clientele is pretty dedicated, looking for NASCAR racing models. “We don’t see many walk-in customers,” he said. But on a rainy Friday afternoon, he was checking a dozen boxes of new stock for a customer who was coming in to claim them all.

He figures his smaller shop has about 1,200 racing die-cast available in 1/24th, 1/18th and 1/64th scale. He sells through Twitter, Instagram, Facebook, his website, “and we’ve really done well on eBay,” where he has 190 cars awaiting buyers.

“There are two types of people who come to my shop,” he said. “The first type, they want a vehicle they owned or their parents owned, or they want to own. They don’t have a collection, they just want to buy a piece. The second type, they are narrowly focused but have huge collections. I know a guy in Utica who had 8,000 fire truck models.”

Serious collectors are specific — they’re looking for only exotic Italian cars, only Corvettes, only Mustangs only for construction vehicles.

Theobald said there are more general collectors who look for, say, muscle cars and are happy with Challengers, Camaros, Javelins, Mustangs or others. “People collect station wagons [they’re rare], limousines, presidential cars, pickup trucks, big rigs, construction equipment, motorcycles. In those groups, they don’t have any preference: if they don’t have it, they’ll buy it.”

If you’re thinking about starting a collection, Theobald recommends you ask yourself some questions:

1) Do you have enough space? “I recommend people start with 1:43rd scale: it shows just enough detail.”

2) Do you have your spouse’s permission? “For the vast majority of my long-term customers, their spouses do not want these in the house on display. There are exceptions.”

3) How much money do you want to put into this?

What do people get out of starting and building a diecast collection?

“The simple thing would be, ‘I want to own a bunch of cars,’” said Theobald. ‘But I’m not Jay Leno. I don’t have millions of dollars and a warehouse to store parts in.’ Very often these customers already own a collector car — a nice Mustang or Corvette — and they want more than one. This is the way to reasonably acquire cars you like and you don’t have to empty your bank account.

“I have customers who really love every single one of their cars, and those are the people whose collections don’t get out of hand,” he said.

To get started, Theobald urges a new collector to focus on what he or she likes, and how much they want to spend.

Photo: Nested model cars in Ray J’s corner shop in Newark, where Ray Delue sells parts and accessories for American motorcycles. He has one display of cars above the parts desk, and this one is next to it.