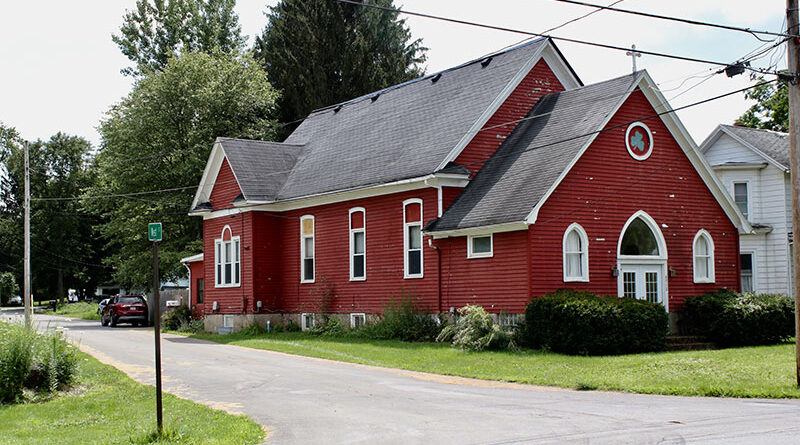 For Tim Schramm, the dreams just keep on coming.

He’s living in a converted church, for instance.

“It was always my dream to live in a converted church,” he admitted.

Half of his very expansive living room is dominated by three more dreams.

“All three of them are dream instruments,” he said.

On the left is a 9-foot Baldwin grand piano that once graced the concert stage at Fredonia State University.

In the center is a Rodgers 360 theatre organ, a digital replica of a Wurlitzer, common to large movie theaters. Schramm acquired it after teaching organ to the friend’s 90-year-old father. After enjoying lessons for a year, the father begged off when he had a mini-stroke but told Schramm, “I want you to have the organ.”

“It’s a very rare organ,” he said. “The guys who have them don’t want to get rid of them.”

The 205 is part electric and part pipe organ, with a unique church-filling capacity.

As a member of several internet organ groups, Schramm wondered one day if someone might have a 205 they’re be winning to part with.

“I’d told myself I’d never be able to afford one…but we agreed on a really good price. I got a friend of mine and a truck and we drove to Washington, DC, to pick up the organ,” he said.

The organs and piano are waiting for more air to become available in the house. Originally a Dutch Reformed church built on a country intersection in East Palmyra (Wayne County), the building was sold to a Baptist church, and finally to Bill and Mary Kay McGrath, who did the heavy lifting of converting the house of worship into a home.

Schramm has updated what the McGraths did and now plans to take out the ceiling to open up the rafters to the building’s peaked roof.

Part of that will be used for his new bedroom; part of it will be a sound chamber for those lovely dream instruments.

And he doesn’t plan to be alone while enjoying all this.

“One of the things I want to do is give back to the community with this space,” Schramm said. “I toyed with the idea of this being a wedding chapel, which still may happen. What we have been doing is holding hymn sings every six weeks. Good crowds come in. Someone just donated 58 hymnals. People find out by word of mouth. A lot of the people who attended the Dutch Reformed church have been coming to the hymn sings because this is their old building. About 30 people; we have a good time. I have a buddy from Buffalo I’ve known all my life, Dennis Overholt, he comes in and plays the organ and I play the piano.

“I want to hold concerts featuring local artists where we could have 20-30 people in on a Saturday or Sunday afternoon and let’s showcase these people. It doesn’t have to be organ or piano. We could have a clarinet player or saxophone player, vocalists, all sorts of stuff.”

Schramm was all of 5 when he started pounding out tunes on a piano. He got good quickly.

“I was in junior high when my parents bought me my first organ, a Baldwin,” he said. At age 11, he was making his debut as an organist at the Webster Assembly of God. At Webster Schroeder high school, he was accompanist for the choir.

After graduation, he got involved selling organs and pianos and picked up church organist assignments. He graduated from the Simmons Mortuary School in Syracuse, worked at the Watson Funeral Home in Center Square, Oswego County, and still has his license. In 1980 he got married. His daughter, Victoria, suffered from ataxia telangiectasia, a disease that normally begins in childhood and slowly deteriorates the cerebellum in the brain. Tori died three years ago at 31. It’s a loss that is very much with her dad.

“Since Tori has gone, I’ve struggled to find happiness,” he said. “I’m still working on it.”

Music has sustained him — he made his living as a full-time musician. He was an accompanist for the Rochester City School District for almost 20 years. He had played at the George Eastman Museum. He was organist for the Walnut Hill Carriage Driving Competition in Pittsford. He was music director at the Utica Assembly of God Church. He has played concerts in England and Canada and throughout New York.

“For a long time I was the program chair for the Rochester Theatre Organ Society,” he said. “I booked the artists and when they would come into town, I generally housed them and babysat them and fed them and all that good stuff. I did that for 10 years, 10 concerts a year. I produced a Christmas concert every year. Last year when we couldn’t get into the Auditorium Theatre, we filmed it here.”

You can find Schramm in concert on YouTube. And if you attended the gala announcing the Rochester Broadway Theatre League’s next year’s shows, he was the organist playing the theme songs from each show.

These days, he is a part-time salesman at the Denton, Cottier & Daniels piano and organ store in East Rochester and plays the organ for services at Catholic churches in Newark, Lyons, Clyde, Savannah and Macedon where he brought a new perspective.

“I was with a Methodist church for 12 years,” he said. “They loved to sing but the congregation was dwindling. They had quite a repertoire of hymns they liked to sing. When I got to St. Michael’s in Newark, there were just eight or 10 hymns. I said to myself, ‘This is not going to work.’

“There’s so much rich theology in the hymns, let’s learn some stuff. The choir hadn’t heard some of the real good classic standards and didn’t know them. I take a very protestant approach to hymn-singing and apply it. Protestant hymns are very structured and easy to sing. A lot of Catholic hymns have odd rhythmic values and are difficult to sing. I’m very careful when I pick the hymns that they’re rhythmically correct and easy to sing and follow along in the hymn. That really encourages singing. If people feel they know the music, they can sing it. The only reaction I’ve heard is people singing. That’s what I set out to do, is have people singing.”

And just recently, another couple of dreams have come true.

“A friend called me. He said, ‘I need a car. Will you go car-shopping with me?’ They had a 2006 BMW Z4 in the showroom. I thought, I can afford this — it’s pure vanity, but I can afford it. I love this thing. I got online and joined a national BMW Z-car owners’ club. All of a sudden, I get this text message from a guy down in Florida. He’s a music producer. One thing led to another and he asked me, ‘Have you ever written any music?’

“Yes, I’ve written one song. Well, he took me through the whole process of getting the song copyrighted. It’s a Christmas tune, which I’m going down to record. He claims he can get it published. This is a real turning point in my career if this thing takes off. I’ve written another song, a gospel tune, I want to get that copyrighted and recorded. He has listened to some of my work on YouTube and he wants me to play piano on some of his recordings, be one of his studio musicians. But I don’t see moving to Florida — I don’t want to leave this house.”
A converted church…a Baldwin grand piano…two Rodgers organs…a BMW convertible…a song getting recorded…a studio musician gig — the dreams just keep coming for Tim Schramm.

Photo: Tim Schramm’s home in East Palmyra. The building is a former Dutch Reformed church and later Baptist church. “It was always my dream to live in a converted church,” he says.