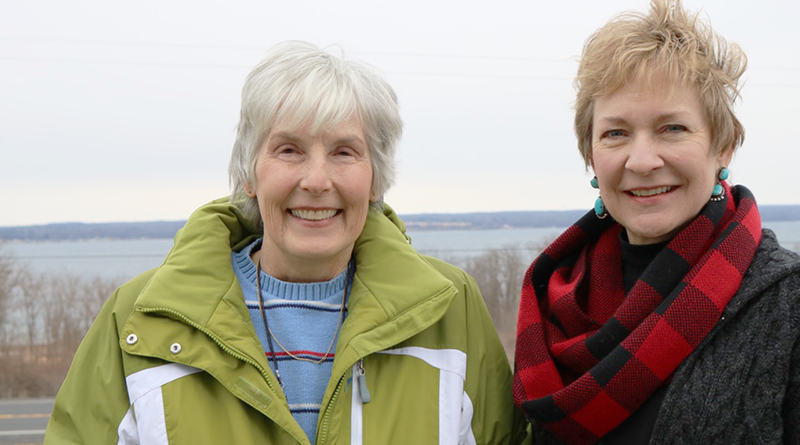 Isn’t one of the great things about a best friend that he or she will talk you into doing something you’d never think of doing yourself?

Sandy Wallace, 63, and Jewel Burr, 61, have been best friends for more than 30 years, finding each other when they were nurses at Corning Community Hospital.

“That’s when all the adventures started,” Burr said. “Sandy talked me into running marathons. I’d never jogged in my life. She said I looked like a better specimen compared to the other nurses who smoked and had no interest in exercise. That was her first harebrained idea.

“She’s like Lucy Ricardo [from “I Love Lucy”] — she comes up with these things.”

Take for instance a bike trip from Buffalo to Gloucester, Mass., that made the women famous in the Crow’s Nest bar in Gloucester; or three marathons, one of which they finished together; or biking halfway around Lake Ontario and in Canada.

It was Burr’s turn for a nut-ball idea: a summer hike on the Appalachian Trail.

“We may have taken a few extended biking trips over the years, but we didn’t need to pack camping gear and food,” wrote Wallace in a book she hopes to publish. “We did the motel-restaurant thing. We had all the creature comforts we wanted, without having to strap them on our backs.”

Nope, Wallace decided. She was about to retire from her last career as a BOCES counselor and spend days on the trail with Burr — that wasn’t going to happen.

She was sure Burr would come to her senses.

“She shamed me,” said Wallace.

“My knees, hips, shoulders and back complained every day. Loudly. No, I wasn’t going to hike on the Appalachian Trail with a full backpack strapped to my bony frame. Ever,” Wallace wrote. “I had sailed on by my prime. I was looking at a life of lunching with the ladies, crafts, playing my bagpipes and daily workouts at the YMCA, where I rarely broke a sweat. I’d given up biking. I fretted about my sun-drenched skin. I was a hot mess with regard to the aging process — I felt old. Maybe 60 was the new 40, but I missed that memo.”

But Burr drew her in. “I asked Sandy to come as many days as she could,” she said.

With her job as a school nurse, Burr had a whole summer off for the first time in her work life, and hiking was on her mind. She had walked part of the Appalachian Trail with her brother Bruce for three days, and had her eyes opened.

“It’s a whole different world in the woods,” she said. The hiker community is caring and kind, and people watch out for one another. Along the trail, supporters and hiking aficionados occasionally put out “trail magic” — free snacks for hikers.

When Burr started out on the Appalachian Trail in Harpers Ferry, W. Va., she hiked for 10 days before meeting up with Wallace.

“I had never camped, never backpacked,” Wallace said, and she found out that serious trail hiking was arduous. “It was way harder than running a marathon or biking — physically and mentally harder.”

For Wallace, the mental portion was difficult because she got bored easily and after a little bit of chitchat with Burr, things were quiet for miles.

Burr, on the other hand, found peace in being on the trail and solace when alone. She could think clearly, and many of the final details for divorcing her second husband were decided on her 38-day trek from West Virginia to the New York-New Jersey line.

“I loved being alone,” she said. “I was more focused, being away from the real world. It was very healing for me. I was going through a divorce from the guy I thought would be my forever man. The hike healed me emotionally. I didn’t want to come off the trail.”

On the trail, they would stop at one of the 250-plus shelters along the trail for the night. If a shelter was full, they’d set up their tent nearby. The lean-to shelters accommodated all kinds of hikers on a first come-first served basis. There were some rules of the trail to follow, of course. For instance, if you snore, don’t sleep there — go out to your tent.

And after a few days on the trail with its extreme physical exertion and no showers available, folks can get a little gamey. Wallace had a head-snapping revelation the first time she entered a hiker-populated shelter.

“It stank,” she said. The big stinkers – and they know it – are the ‘through’ hikers who are on their way to cover all 2,180 miles of the Appalachian Trail. But once she was one of those folks, she didn’t care about the odor anymore, Wallace said.

Mornings on the trail for Burr and Wallace started at 7:30 with breakfast. “You eat horribly,” Burr said. “You have to carry your house with you — your kitchen and clothes and personal items and medicines and a pack tent and stove and water filter. We’d leave at 9. You have to eat a lot because you burn so many calories.”

The two stopped for a mid-morning snack and lunch, and paused for a break in the afternoons. They covered 8-10 miles a day.

Burr had planned the trip through the help of a veteran hiker she met online, someone who saved them grief with sage, pertinent advice.

Once in motion, the women might not see another human for hours. They did decide to spend one night in a motel in Clarion, Pa.

“All those days on the trail, we never got a tick bite; one night in the motel in Clarion and we both had spider bites that became infected,” Burr said.
In their travels, they ran into an elderly couple who offered them dinner and a place to stay for the night, whom Wallace and her husband, John, went back to visit the following year.

Words from the wise

Burr and Wallace have some advice for anyone of a certain age thinking about the Appalachian Trail.

First, Burr said, “Plan a lot.” She also underlined this kind of hiking as safe. “A lot of women go alone. You’ll be fine, safer than downtown Elmira at night,” she noted.

“I didn’t plan at all,” admitted Wallace.

“For older people, definitely walk, walk, walk and walk, and be sure to walk up some hills,” said Wallace. “It’s a bonus if you can walk with your pack on.”
Third, “Do it while you can, while you’re able,” said Burr. “My goal is to do the whole trail, from West Virginia to Maine.”

And Wallace said not to hesitate because things other than your health and well-being, like family issues and responsibilities, can intervene.

Wallace said the trip meant something deeper for both women. “Jewel told me at the end of the trip that she felt she had lost her soul, and hoped that the solace and peace of the woods would help her find it again.

“For me, there was a parallel search, but it started before the trip, and it was that my spirit that had disappeared. It started when she told me that she didn’t recognize me anymore. She wondered where I had gone, and when this ‘old’ woman had appeared. I had wondered that as well.

“It seems Jewel found her soul on the trail; I found my spirit.”